Everyone forgets about Mary Oliver's grasshopper 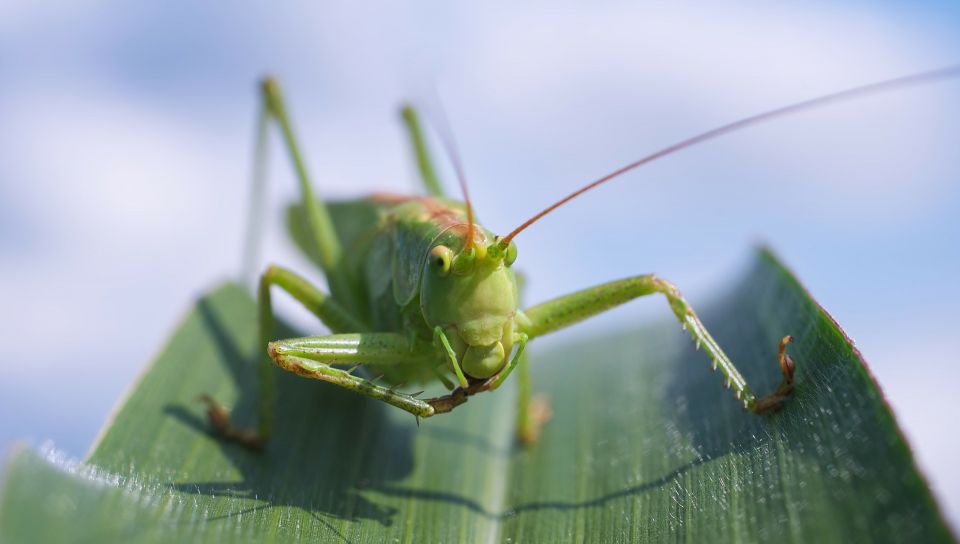 It was a summer day when I realized there's nothing recorded of Jesus between the ages of 12 and 30. We go straight from childhood innocence to developed adult. No awkward and acne-filled teenage years with teenage angst and teenage impulses; no month-long early teenage romances of handholding and note-writing passion.

I heard one of the best-worst jokes when I was around 14, and I found the joke carried a twinge of truth that resonated more than the punch line. It went something like this:

I kept thinking about that groaner of a joke for the remainder of the day. I thought about all those CCD classes and how the nuns presented the Bible as a guide for life, containing all the answers. But how could it be a guide for me, a teenager, when there's literally nothing mentioned about the life and trials of the protagonist in his teenage years? As of this June, I've lived every year from twelve to thirty, those missing years of Jesus' life.

Sometime between that joke about Jesus being grounded and realizing the Bible was oddly silent on his young adult development, I read Mary Oliver's poem "The Summer Day," and then I heard it again and again. I heard it ad nauseam: high school graduation; college graduation; throughout my year of service with a Catholic Volunteer Network organization (I chose Amate House – my wife chose Mercy Volunteer Corps); retreat opportunities and facilitated gatherings. You cannot escape that blessed poem any more than you can escape the Gospels when you're an engaged young Catholic.

In point of fact, no one can escape its final 14 words. The preceding 85 percent of the poem seems to get forgotten in most re-tellings. What people repeat is this big question:   " … what is it you plan to do with your one wild and precious life?"

However, I don't think that does justice to the whole poem, which begins:

The poem continues with a profound reflection on the grasshopper, which you can read in its entirety here.

I'm not sure if I'm still stuck living with teenage angst at 30 or if I've matured to full-fledged adult existential dread. "What is it I plan to do with my one wild (that's debatable) and precious life?" has turned into an examen with the modified questions:

Not unlike the fully-human Christ going from 12 to 30 in the Bible, we know that neither he nor we are on auto pilot for those 18 years; we're creating and re-creating what we want for our lives in that curious and quixotic phase of life.

Religion dies in silence. Before some folks come at me with pitchforks, I'm not saying there isn't sacred silence, or that one's quiet faith is a spiritual death sentence. It's not. You can pray, as Jesus instructed, in silence, but if you don't converse about your faith it dies. I think St. Mary's Press has elucidated that point quite well in the book Going, Going, Gone: The Dynamics of Disaffiliation in Young Catholics. The average age that someone reports leaving the Catholic faith is now 13 years old. Many folks who are now ex-Catholics or non-practicing Catholics report that when they left the church none of their close friends were Catholic or religion wasn't important to them. You talk with friends. If faith — your faith — is not shared by your friends, you're not going to talk about it and it will wither like summer grass in a field beset by days of unyielding heat without rain.

Therefore, there's a strange irony about the silence of Christ's life between 12 and 30. After all, at 30 Jesus begins his public ministry as an itinerant rabbi or preacher. His faith, spirituality and the development of his Jewish religious beliefs were clearly a part of those silent years. For those of us young adults still in the pews, those years were full of faith development, formation and encounter. Unfortunately, for many — perhaps most — Catholics my age, those years were not spent that way and now their faith has fallen silent.

Now at 30, having recently passed through those silent years, I think of Mary Oliver on these summer days. I think often of the enormity of her first question, "Who made the world?" and the last "what am I doing with my life?" but I am trying now to think about the littleness in between; the blades of grass in a field, a grasshopper and her mandible, wings and eyes. Those enormous and complicated eyes of the grasshopper, they're about the size of a mustard seed, of which Jesus told a short parable. And I try to be idle and blessed because as Mary Oliver asked and Jesus lived, everything dies at last and too soon. I pray that perhaps I can pay attention, fall down into the grass and be idle enough to hear from the grasshopper what Elijah heard at the entrance of the cave, a light silent sound — God.