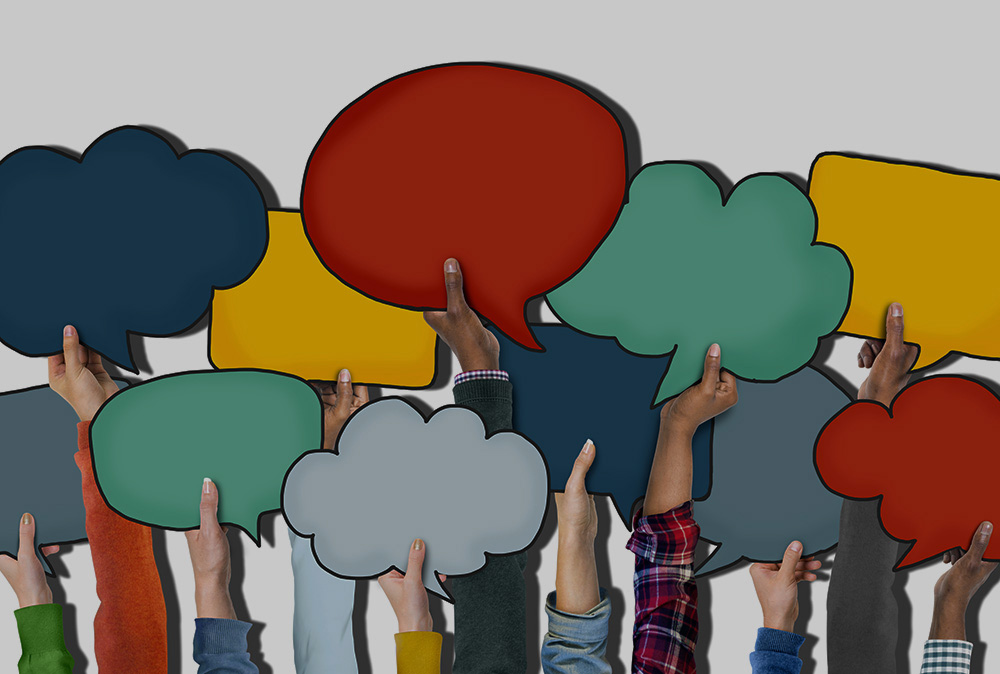 I am fascinated and encouraged by Pope Francis' determination to find ways for all the people of God to participate in the 2021-23 synod on synodality. As I write, the diocesan phase of the synod process is just beginning.

Given initial reports that the U.S. Conference of Catholic Bishops and many U.S. dioceses seemed less than enthusiastic about Francis' synod, I decided to do an informal review of the websites of major U.S. dioceses and archdioceses — especially those with large populations.

I was pleasantly surprised to discover that of the 67 websites I visited over Oct. 15-17, more than half indicated a comprehensive process was planned or already underway (34) or said plans would be announced soon (3). Most featured the synod logo and the detailed resources so helpfully provided by the Vatican's synod website.

I suspect that more than one busy diocesan employee appreciates the work done by the General Secretariat for the Synod of Bishops to make their very big job a bit easier. 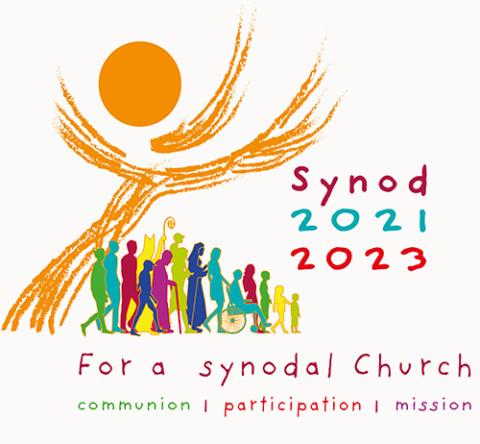 The logo for the Synod of Bishops on synodality (Courtesy of synod.va)

Of the remaining 30 U.S. diocesan or archdiocesan websites I looked at, seven planned a special synod Mass, although follow-up plans were vague or unclear. Three others (Dallas, Seattle and St. Paul-Minneapolis) noted that they hope to integrate Vatican synod processes with their own synods already underway.

Sixteen websites had no synod events posted at all on the dates that I looked. Of these 16, four (Detroit; Springfield, Illinois; Milwaukee; and Hartford, Connecticut) already completed synod processes of their own within the past five years.

I found no synod information on the website for the Diocese of Orange, California, although a spokesperson told a Catholic publication that Bishop Kevin Vann and his advisers were studying the documents and "praying for the Holy Spirit's presence as we roll out the first phase of the process."

Since Cardinal Sean O'Malley is a special consultor to Pope Francis, I was quite surprised to find no mention of synod events on the Boston Archdiocese's website. Yet a Boston parish — St. John-St. Paul in Wellesley — has extensive information about the synod on its website. One hopes the archdiocese will quickly catch up with this zealous parish.

Given church politics, it is probably unsurprising that the San Francisco Archdiocese's website made no mention of a synod process. Archbishop Salvador Cordileone is a well-known proponent of refusing Communion to President Joe Biden and politicians like Nancy Pelosi, which Pope Francis opposes.

Contrast this with the Los Angeles Archdiocese, which plans to make use of pastoral councils at the archdiocesan, regional and parish levels to promote listening sessions. Likewise, in early 2022, San Diego plans a consultative process on the 10 themes of the synod.

It is concerning to find no evidence of a planned synod process on the website of the New York Archdiocese, one of the largest and most influential sees in the United States. A special opening Mass was announced only on the archdiocese's Facebook page, with no mention of follow-up events.

Philadelphia's website trumpeted an opening Mass inviting all priests in the archdiocese to concelebrate, "which is intended to manifest the participation of all members of the local church in the fullest possible way." This, plus the absence of synod resources and the logo, and a vague statement about "follow up consultation within the local Church," leaves one wondering about clericalism in that archdiocese.

Yet the websites of other large eastern archdioceses such as Newark, New Jersey; Washington, D.C.; Baltimore; Atlanta; and Miami all featured robust synod information and plans to involve laity in synodal processes.

In the heartland, the Galveston-Houston and Chicago archdioceses also announced comprehensive synod outreach. Denver planned an opening Mass but nothing else was on the website, although a spokesman announced that plans would be "communicated to all the faithful once the plans are finalized." St. Louis' website listed nothing about the synod but announced a new strategic planning process, which often heralds massive parish downsizing.

My impromptu mini-survey is obviously not conclusive. But it does provide a snapshot of where things are right now. The initial picture is perhaps a bit more promising than first feared.

It is heartening to see synod events being planned by ecclesial leaders of both "liberal" and "conservative" persuasions.

Since the diocesan phase of the synod process is just beginning, I trust many more dioceses will soon publish plans for engaging all Catholics — with special attention to those on the margins — as Francis has said he desires. 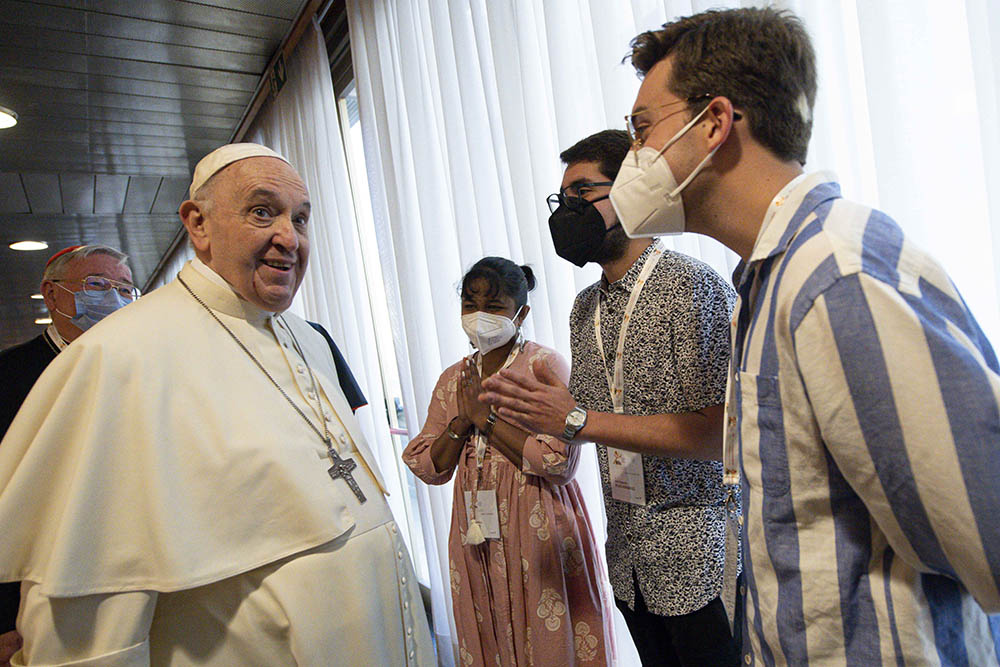 Pope Francis greets people during a meeting with representatives of bishops' conferences from around the world at the Vatican Oct. 9. The meeting came as the Vatican launched the process that will lead up to the assembly of the world Synod of Bishops in 2023. (CNS/Paul Haring)

And here is some breaking news: Catholics whose dioceses are not conducting an inclusive process are still able to submit direct input to the synod office in Rome. As Page 14 of the vademecum handbook reads:

Religious communities, lay movements, associations of the faithful, and other ecclesial groups are encouraged to participate in the Synodal Process in the context of the local Churches. However, it is also possible for them, and for any group or individual that does not have an opportunity to do so at the local level [emphasis mine] to contribute directly to the General Secretariat.

So if your diocese is balking, download synod resources, gather your friends and submit your feedback directly to the general secretariat by April 1, 2022. Contact information can be found at the bottom of the synod website page.

Three weeks ago, my home diocese of Cleveland celebrated the life of Bishop Anthony Pilla who led us for over 25 years and remained pastorally involved until his death at age 88.

A past president of the U.S. bishops' conference, Pilla was widely respected for his pastoral demeanor, promotion of social justice and innovative efforts to preserve urban parishes, including the nationally recognized Church in the City initiative. FutureChurch leadership met with him a number of times, despite increasingly fraught ecclesial politics.

Pilla's episcopal ministry was marred by the clergy sex abuse scandal but his love for his hometown was newly appreciated after his successor, Bishop Richard Lennon, tried to reverse much of what Pilla had valued.

Despite the increasingly polarized atmosphere under Pope John Paul II, Pilla met with national church reform organizations in 1997 in his capacity as president of the national bishops' conference. We discussed married priests, women's roles in the church, social justice, LGBTQ issues and the rights of laity in the church. Pilla believed in talking through differences and was always willing to dialogue with people, even though he may have disagreed with them.

With the launch of the 2021-23 synod, I cannot help but think of my former bishop. The value of personal encounter in addressing differences in the church seems to have come full circle at last.

Bishop Pilla would have liked that — a lot.

Editor's note: The map below contains links to U.S. archdioceses and dioceses with consultation plans for the 2021-23 Synod of Bishops on synodality. If your diocesan synod plan is not on this map, please email the link to synod@ncronline.org to be included.

This story appears in the Synod on Synodality feature series. View the full series.
A version of this story appeared in the Nov 12-25, 2021 print issue under the headline: Is your diocese promoting the synod? No matter what, you can still participate.