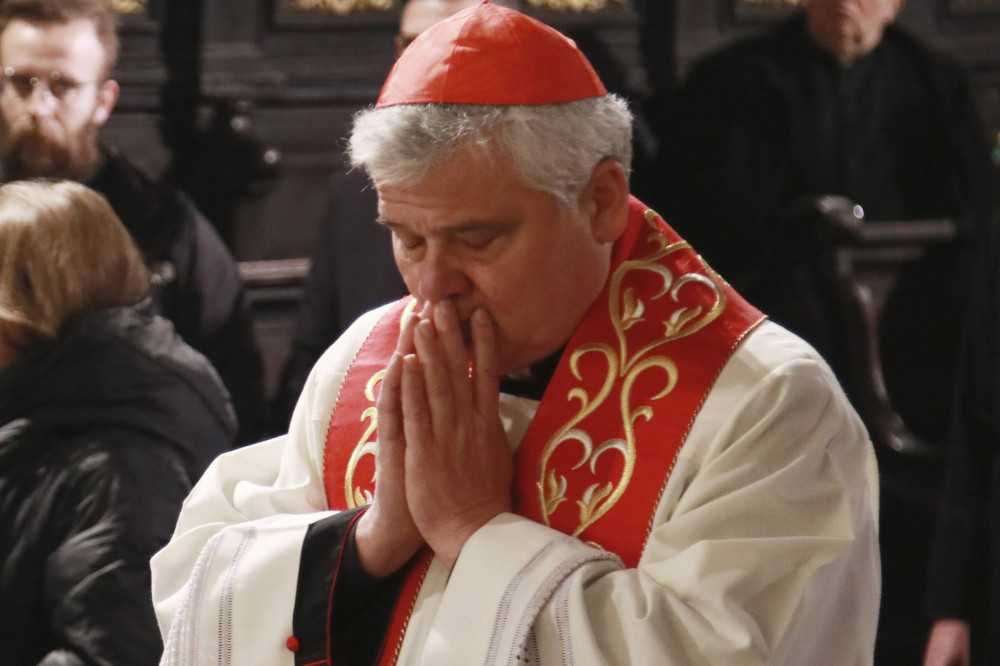 Cardinal Konrad Krajewski, the papal almoner, prays during an interreligious prayer service in the Latin-rite cathedral of Lviv, Ukraine, in this March 10, 2022, file photo. Cardinal Krajewski said he and several others came under gunfire while delivering aid in the Ukrainian city of Zaporizhzhia. (CNS photo/courtesy Ukrainian Catholic Church)

In an interview with Vatican News published Sept. 17, Krajewski said he was delivering goods in the southeastern Ukrainian city of Zaporizhzhia with a Catholic bishop, a Protestant bishop and a Ukrainian soldier when the attack occurred.

"For the first time in my life, I didn't know where to run because it's not enough to run. You have to know where to go," the cardinal said.

The cardinal and those with him managed to escape the attack and continued delivering goods loaded in a minibus.

The Dicastery for the Service of Charity announced Sept. 9 that Krajewski would embark on his fourth trip to Ukraine and visit Odesa, Zhytomyr, Kharkiv and other locations in eastern Ukraine.

The purpose of his visit, the dicastery said, was to provide support to "various communities of faithful, priests and religious, and their bishops, who for more than 200 days continue to remain in the places of their ministry despite the dangers of war."

"It is a silent and evangelical trip to be with the people who are suffering, praying and comforting each of them, showing with his presence that they are not alone in this situation that is only bringing destruction and death," the statement said.

Speaking by telephone with Vatican News, Krajewski noted that his visit to Ukraine coincided with the ninth anniversary of his episcopal ordination and his appointment as papal almoner.

The cardinal said he spent the day loading a minibus with provisions and rosaries blessed by the pope and delivering them to people in areas where "no one besides soldiers enter anymore."

Witnessing the devastation of war in the country on the day of his anniversary, Krajewski told Vatican News that it was a "day without mercy" in which "there are no tears nor words."

"We can only pray and repeat: 'Jesus, I trust in you,'" the cardinal said.