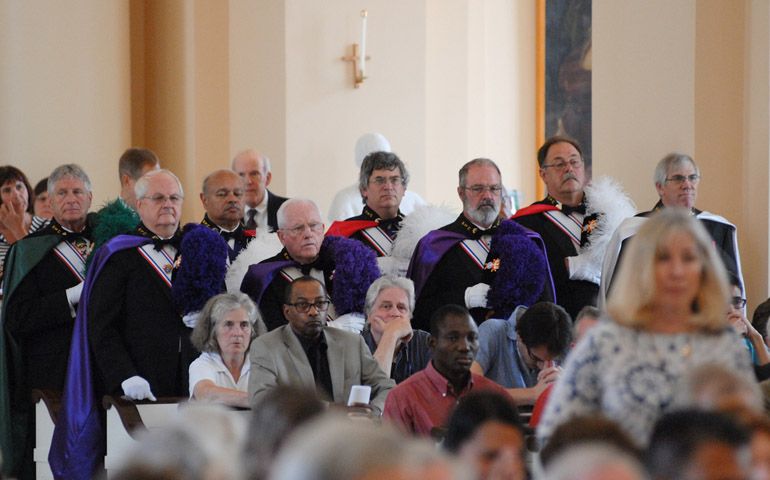 People gather Sunday at the Basilica of the National Shrine of the Assumption of the Blessed Virgin Mary in Baltimore for a Mass to mark the beginning of the U.S. bishops' Fortnight for Freedom. (CNS/Courtesy of the Baltimore archdiocese)

Baltimore — Archbishop William Lori reminded those gathered for Mass Sunday at the Basilica of the National Shrine of the Assumption of the Blessed Virgin Mary in Baltimore that when it comes to religious freedom, American Catholics and Christians worldwide are in the same "boat."

In the day's Gospel reading, from Chapter 4 of St. Mark's Gospel, Jesus calmed the storm threatening the boat carrying him and the apostles on the Sea of Galilee. That boat symbolizes the church through history, Lori said in his homily.

He was the main celebrant at a Mass to open the U.S. bishops' fourth annual Fortnight for Freedom. Almost 1,000 people attended.

"As we look at the passenger manifest of this 2,000-year-old voyage, whom do we see?" he asked during his homily. "Don't we see those early Christians who encountered such stiff headwinds as they courageously bore witness to the faith amid persecution?

"And at our end of the boat are those 21 Coptic Christians, who just recently were lined up and beheaded while the cameras kept rolling."

American Catholics don't suffer the same threats as Christians in Libya -- where Islamic State militants committed that atrocity -- or in Syria, Iran or Iraq, but they are in the same boat, he said.

"No matter how great the threat to life and property, Lori said, "these believers exercise that God-given freedom which no tyrant can eradicate -- the freedom to bear witness to one's faith even at the cost of one's life. We should be inspired by their courage and renewed in our resolve not to let religious freedom in our country be compromised by degrees until it all but disappears from our society."

The fortnight is a two-week period of prayer, education and advocacy focused on the role of faith in public life and the preservation of religious liberty rights. The observance closes July 4 with a Mass to be celebrated at the Basilica of the National Shrine of the Immaculate Conception in Washington.

Lori is chairman of the U.S. Conference of Catholic Bishops' Ad Hoc Committee for Religious Liberty.

This year's fortnight theme is "Freedom to Bear Witness." According to the Baltimore archdiocese, it is designed to "call attention to the rights of Catholic Americans to serve the common good according to their religious beliefs, an ideal threatened in a number of ways, including the U.S. Department of Health and Human Services Mandate which compels all employers to provide coverage of drugs and services that are contrary to the teachings of the Catholic Church."

Religious freedom remains the most important freedom Americans have, Lori said, a gift from God "inscribed on the heart of every person, essential to human dignity."

"Religious institutions in the United States are in danger of losing their freedom to hire for mission and their freedom to defend the family," he continued. "Endangered is the freedom of church ministries to provide employee benefits and to provide adoptions and refugee services in accord with the church's teaching on faith and morals. It is one thing for others to disagree with the church's teaching but quite another to discriminate against the rights of believers to practice our faith, not just in word but in the way we conduct our daily life, ministry and business."

In facing the "unchartered waters" of the current political and social seas of life, the archbishop returned to the turbulent Sea of Galilee.

"We do need to awaken the Christ who is within us," Lori said. "Let us rouse him by a strong and active faith that links us to those who have exercised their sovereign freedom by bearing witness to Christ and to the faith by laying down their lives. Better, let us allow Christ to awaken our faith and to stir us into action so that we may preserve, protect and defend our God-given freedom to bear him witness."

Auxiliary Bishop Denis Madden of Baltimore and Bishop Paul Loverde of Arlington, Va., concelebrated the Mass along with a number of other priests. Cardinal Edwin O'Brien, grand master of the Equestrian Order of the Holy Sepulchre and a former archbishop of Baltimore, presided.

[Karen Sampson Hoffman writes for The Catholic Review, newspaper of the Baltimore archdiocese.]

Religious liberty should unite us, not divide us