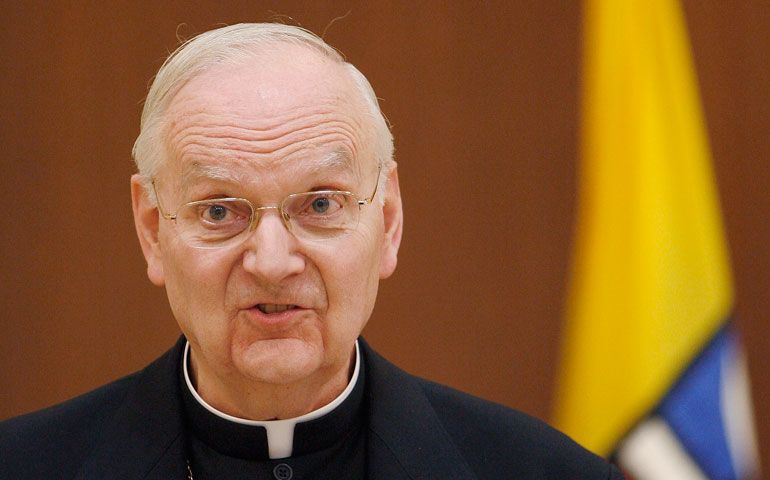 Seattle — U.S. Catholic bishops "must take to heart" that the "vast majority" of U.S. priests are "extremely dissatisfied" with the current translation of the Roman missal, says the bishop who was responsible for the nation's liturgy policies for six years.

Liturgical celebrants find much of the new missal's language "flawed, awkward and clumsy," said Bishop Donald Trautman during an interview as he prepared to fly to Seattle, where the Association of U.S. Catholic Priests honored him with its Blessed Pope John XXIII Award during its national assembly June 24-27 at Seattle University.

Trautman served as chairman of the U.S. Conference of Catholic Bishops' Committee on the Liturgy, now known as the Committee on Divine Worship.

He said he was "accepting the honor on behalf of all those who have struggled through the years" seeking "a lectionary and missal that are prayerful, understandable and proclaimable."

The recently retired bishop of Erie, Pa., said bishops "have to take note of the fact" that multiple studies have documented priests' "alarming" discomfort with translations used in celebration of Mass since November 2011, when the revised Sacramentary took effect in the United States.

"Some will say the new translation is the greatest thing that ever happened," Trautman said, but researchers have reported "nearly 80 percent" of U.S. priests dislike the revised language.

That percentage appeared to have been even higher among the 150 priest participants at the AUSCP gathering, where a resolution was put forward that would have sought permission directly from Pope Francis to use the 1974 Sacramentary "in the United States where desired" or, alternatively, that "at all Masses" it would be permitted to use "the presidential prayers of the 1974 Sacramentary including the optional Opening Collect written by the United States Conference of Catholic Bishops, prayer over the Gifts and Communion Prayer."

The resolution was defeated partly because of its wording but largely "because it did not rise up to sufficiently meet the concerns" of the assembly, AUSCP board chairman Fr. David Cooper told NCR.

"The issue is even more important than we thought," he said, adding that it was clear the organization still plans to "speak to the pastoral hearts of the bishops" and "build bridges of trust with them" on widespread clergy concern over the Sacramentary.

Trautman called the resolution "well-intended" and lauded it for "giving witness" to priests' frustrations. Even so, he said he doubted the failed resolution would have had any tangible impact.

History supports that. Last year's assembly in Tampa, Fla., passed a lengthy resolution urging "our bishops ... to exercise their collegial powers and responsibilities" to speak with Vatican authorities about dissatisfaction over the new Roman Missal.

The resolution was sent to the bishops' Committee on Divine Worship, Cooper said, but there was no response.

Cooper said Trautman "has committed himself to assisting the AUSCP board in transmitting our concerns to the appropriate committee" of the U.S. bishops' conference.

Trautman told NCR, "What worries me most are the (research) statements that report priests saying they are not being nurtured or nourished spiritually" by the translations. He called it "shocking."

"We have to listen to our pastors and priests," he said.

Noting that discontent with Sacramentary translations is not as prevalent among the laity as with priests, the bishop said he was concerned Catholic worshippers "will become spectators again at the Eucharist" as they were in the time before the Second Vatican Council.

Emphasizing that liturgical language "must serve the hearer" and can suffer when "slavishly literal," Trautman said.

"Our Lord did not speak above the heads of his hearers," he said. "He used the language of the people."

As an example of cumbersome language, he mentioned his recent encounter with Preface VIII in ordinary time: "There are 64 words in one sentence with only two clauses," he said. "It's not English; it's not pastoral; it's impossible. I couldn't make any sense of it."

Trautman was chair of the bishops' liturgy committee when the U.S. bishops voted by a two-thirds majority in January 1995 to adopt a long-vetted English translation of the Psalms for use in the United States. However, the Vatican's Congregation for the Doctrine of the Faith said the translation was unacceptable, Trautman said. The doctrinal congregation forced the U.S. bishops to cancel the Psalter's use, resulting in an awkward and embarrassing situation, he said.

In seeking to "raise the tone" of texts in the Sacramentary, Trautman said the Vatican translations "have imposed a sacramental, theological language" rather than a "dynamic equivalent" more comprehensible to average Catholics.

"Why are we using terms no one understands?" Trautman asked.

He some countries, including Germany and Italy, "still do not use the new missal."

"What does that say?" Trautman asked. "Why are they dragging their feet?"

Trautman said Pope Francis could with time moderate a top-down exercise of church authority. "We should be patient and let Francis establish his own mark on the church," he said.

During his homily for a June 26 Mass at the Seattle assembly, the bishop said many have frowned Vatican II's "collegial approach and its liturgical renewal."

He quoted Pope Francis' warning against "those who wish to turn the clock back."

"These are the words of Pope Francis and we say, 'Yes, Holy Father, we agree,' " Trautman said. "We have witnessed and endured turning the clock back. We have experienced a lessening of collaboration and dialogue. We have witnessed the pullback from the Constitution on the Sacred Liturgy, which called for 'full, conscious and active participation' (and) liturgical texts that are understandable and proclaimable. Yes, Holy Father, your brothers and co-workers ... stand with you and pray that the clocks not be turned back, but ahead. We pray that the church would read the signs of our times and implement the promptings of the Holy Spirit given at Vatican II. "

At the assembly's final keynote address, Trautman filled in for Fr. Patrick Brennan of Mayslake Ministries, who could not attend the assembly because of illness. Trautman's question-and-answer session went overtime and caused the bishop to miss his scheduled flight home.

[Dan Morris-Young is an NCR West Coast correspondent. His email is dmyoung@ncronline.org.]

Judge strikes down District of Columbia's limits on houses of worship