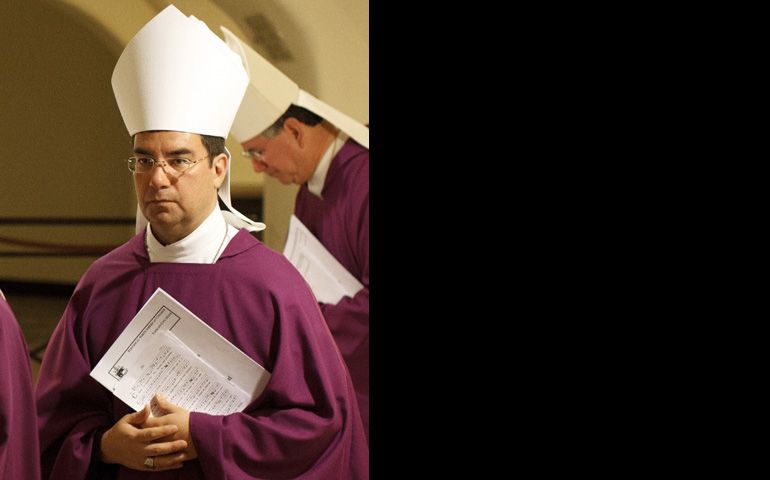 The Diocese of Las Cruces was established in 1982 and Ramirez, now 76, was named its first bishop. Canon law requires bishops to submit their resignations when they turn 75.

The man he succeeds in Las Cruces had likewise been a San Antonio auxiliary bishop in his first episcopal assignment before being appointed to head the Las Cruces Diocese. The date for his installation has not been determined.

"I am humbled that the Holy Father would appoint me to lead a beautiful diocese in a state that I am not terribly familiar with," Cantu said in a statement. "There is a deep sense of 'being sent' -- sent, as the apostles were by Christ, to announce the good news of the Gospel to the four corners of the earth."

"To be following a great man in the person" of Ramirez was also humbling, he added.

Born Dec. 5, 1966, in Houston, Cantu received his bachelor's degree in English from the University of Dallas and two master's degrees from the University of St. Thomas in Houston. He was ordained a priest of the Diocese of Galveston-Houston in 1994. Ten years later, the diocese was made an archdiocese. He did graduate studies in theology at the Pontifical North American College in Rome 1998-2002.

In 2008, Cantu took part in a "torch run" to honor Our Lady of Guadalupe. He said the runners would meet with groups supporting immigration reforms during their journey to New York.

In 2010, Cantu was one of three U.S. bishops to visit Cuba to see how the island nation was recovering from three hurricanes that had hit it the year before and to press for further easing of restrictions on Cuba.

Garcia-Siller in a statement expressed "heartfelt joy" over his auxiliary's appointment but said he will miss "his constant presence, valued friendship and the tireless collaboration we shared in our ministry."

Ramirez was born Sept. 12, 1936, in Bay City, Texas. Both his parents and their families were migrant workers in southern Texas. He attended public schools in Bay City and graduated in 1959 from the University of St. Thomas in Houston. He was ordained to the priesthood as a member of the Basilian Fathers in 1966.

He served in parishes in Canada, Detroit and Mexico. He was on the staff of the Mexican-American Cultural Center (now the Mexican American Catholic College) in San Antonio when in 1981 he was appointed auxiliary bishop of San Antonio. A year later, he was named founding bishop of Las Cruces.

During his tenure in New Mexico, Ramirez has been a strong advocate for immigrant rights.

At a 2007 Catholic Charities USA conference in Cincinnati, he urged attention to the "new victims of racial, ethnic and cultural bias," including "the new pariah in our country" -- undocumented immigrants. "There is only one word to describe the present-day rhetoric and local legislation directed against immigrants around the country, and that is meanness," he said.

During the 1994 fall meeting of the U.S. bishops, he asked that language be added to a statement voicing regret at the passage of California's anti-immigrant Proposition 187 and declaring that "health care and education are among the basic rights to which all people have a moral claim." The language was included, the statement was approved unanimously.

A month after the bishops' meeting, Ramirez called Proposition 187 "unjust, immoral and inhuman." A federal court in 1999 struck it down as unconstitutional; the referendum would have banned undocumented immigrants from using health care and education and other tax-funded social services supplied by the state.

Ramirez also frequently spoke of the danger faced by the church in losing a growing Hispanic populace in the United States.

At the spring 2005 meeting of the U.S. bishops in Chicago, he said of U.S. Hispanics, "Now you see them everywhere. Not just in the Southwest and in cities like Chicago. They are in every diocese up and down the Atlantic seaboard. And if the Catholic church does not reach out to them, they will find their own religions."

He reiterated his concerns the following spring as the bishops, meeting in Los Angeles, discussed a restructuring of their conference. He felt the proposed downsizing would "weaken our pastoral and advocacy efforts," he said, citing pastoral problems of weakening of marriage and family life and the loss of many Catholics, especially Hispanics and young professionals, to evangelical and Pentecostal denominations.

A member of the Commission on International Religious Freedom 2003-07, Ramirez traveled frequently throughout Latin America. As an observer at a 2007 general conference in Brazil of Latin American and Caribbean bishops, he said the United States was "an unspoken theme" in the first days of the gathering, as bishops described problems related to immigration and globalization.

"There is an undercurrent that many of the things that affect Latin America have their origin in the United States," he said.

With regard to parish and liturgy issues, Ramirez said, "Liturgy should be inclusive rather than exclusive." He was the episcopal adviser to the Institute for Hispanic Liturgy. In 1994 at the Southwest Liturgical Conference in Tyler, Texas, he said if liturgy emphasizes that "before God all are the same," and if it teaches that "God is the father or parent of all," then "no one should be excluded from his table."

Catholics "at all costs," he added, have "to learn not to turn people away."