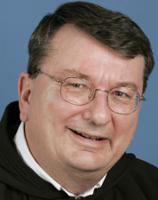 In what appears to be a reconciliatory move by the U.S. bishops’ Committee on Doctrine towards church scholars who took issue with the committee’s sharp critique of a book by a prominent Fordham University theologian, the committee executive director has written it never meant to question the “dedication, honor, creativity, or service” of the author.

The bishops’ doctrine committee in late March issued a 21- page critique of Sr. Elizabeth Johnson’s Quest for the Living God: Mapping Frontiers in the Theology of God, a popular theological text used in colleges and seminaries. After studying the book for one year, the committee concluded it “does not accord with authentic Catholic teaching on essential points” and “completely undermines the Gospel and the faith of those who believe in the Gospel.”

Johnson is a distinguished professor of systematic theology at the Jesuit-run Fordham University in New York. She is a former president of the Catholic Theological Society of America and one of its most well known members.

The bishops’ findings upset a number of Catholic scholars and triggered defenses of Johnson's works. Some scholars faulted the doctrine committee for having failed to accurately convey the intent of the book and accurately present some of its arguments. They also faulted the committee for not having notified Johnson while they evaluated her book.

Among the groups that responded were the boards of the Catholic Theological Society of America and College Theology Society. Both issued statements criticizing the bishops’ doctrine committee.

The faculty at Fordham was equally indignant. One hundred and eighty faculty members signed a statement, dated April 19, defending Johnson as “an esteemed and cherished member of the Fordham community for over two decades.”

They sent a letter to the committee “to convey our unconditional support for our colleague, Sr. Elizabeth Johnson.” They said they were “dismayed” at the committee’s action and urged the bishops’ conference “to take steps to rectify the lack of respect and consideration” shown to a Catholic scholar “who has given a lifetime of honorable, creative, and generous service to the church, the academy, and the world.”

The letter assured the faculty that the committee never intended to tarnish Johnson’s reputation or impugn her honor or dedication to the church.

Weinandy stated the doctrine committee “in no way calls into question the dedication, honor, creativity, or service” of Johnson.

He went on to say the committee had written to Johnson reiterating its willingness to enter into dialogue with her. He said the committee would receive “any written observations on the content of the committee’s statement that she may wish to offer.”

One of the contentions of theologians and others has been that the committee failed to follow U.S. bishops’ guidelines in dealing with the Johnson matter.

They have said the committee never notified Johnson while it was studying her book, as, they allege, is called for in a 1989 bishops’ document.

The doctrine committee has defended its actions, explaining that Johnson’s book was already in print, that it was being used in colleges and seminaries, and so there was nothing to discuss. The committee’s head, Cardinal Donald Wuerl of Washington, lamented that Johnson had never sought an imprimatur, or episcopal approval, before publishing the book.

Throughout much of the 1980s, theologians, canon lawyers and bishops hammered out a document, finally issued in 1989, that established precise procedures for theologians and bishops to work out differences in private settings. The document, called "Doctrinal Responsibilities," calls on bishops and theologians to attempt to settle disputes privately before going public.

In his letter to the Fordham faculty, Weinandy wrote that “this might be a time to review” that 1989 document. “Such a review,” he wrote, “might also provide an occasion to see how well its provisions are understood and applied.”