Brooklyn auxiliary who was first Haitian American bishop in U.S. dies at 86 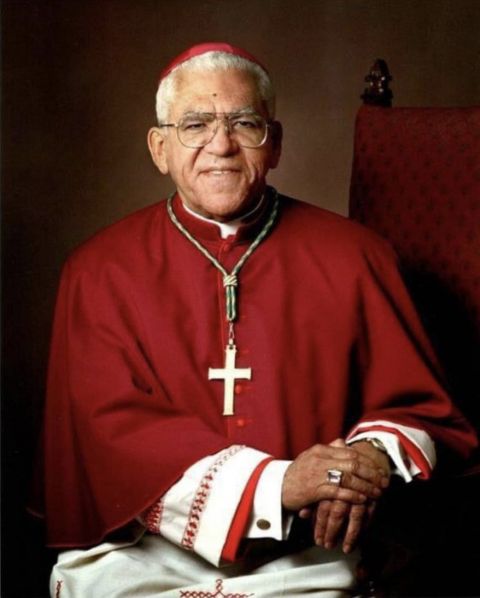 Brooklyn, New York — Retired Auxiliary Bishop Guy A. Sansaricq of Brooklyn, who had ministered in the Diocese of Brooklyn since 1971, died at the rectory at St. Gregory the Great Church in the Crown Heights neighborhood Aug. 21. He was 86.

"Bishop Sansaricq was the first Haitian American bishop in the United States. He was a symbol of the progress of the Haitian people here and, as someone who served as a bishop, gave the Haitian community some recognition and stature as immigrant people, a ministry he served very well," Brooklyn Bishop Nicholas DiMarzio said Aug. 23.

A wake for the late bishop was scheduled for Aug. 31 at St. Jerome Church in Brooklyn and Sept. 1 at St. Gregory the Great Church.

His funeral Mass will be celebrated Sept. 2 at the Co-Cathedral of St. Joseph in Brooklyn. He will be interred in the Bishop Chapel Crypt in Douglaston, New York.

Due to concerns over COVID-19, masks will be required at all public services for the bishop.

"Please pray for the repose of his soul and for the consolation of his family and friends. May he rest in the peace of Christ, the Risen Lord," Msgr. Steven Aguggia, diocesan chancellor, said in a release on details of the services for the late bishop.

He noted that Bishop Sansaricq was a member of the Priests' Purgatorial Society, adding that all priests were invited to concelebrate his funeral Mass.

Bishop Sansaricq held numerous curial positions in the Diocese of Brooklyn. On Aug. 22, 2006, he was ordained as an auxiliary bishop for Brooklyn. On Oct. 6, 2010, Pope Francis accepted his resignation. He had just turned 76. Under canon law, bishops must submit their retirement at age 75.

Bishop Sansaricq also served the diocese as pastor emeritus of St. Gregory the Great in Brooklyn for the last 10 years. He was its pastor 2007-2011.

He had long had a ministry to the Haitian community. He published a quarterly bilingual newsletter on Haitian matters related to the church, conducted an annual pastoral institute in Creole that attracted 90 students, and organized an annual convention of the National Haitian Apostolate, which he had headed since 1987.

The apostolate also serves the community nationwide through French-Creole Mass celebrations, yearly pilgrimages, and a national radio and television station.

Every year, Bishop Sansaricq coordinated a retreat for priests and a youth congress. He also was a co-founder of Haitian-Americans United for Progress, a service agency.

Born Oct. 6, 1934, into devout Catholic family in Jérémie, Haiti, he decided at age 13 that he wanted to become a priest. He studied for the priesthood at the diocesan seminary of the Jérémie Diocese and at St. Paul's Pontifical Seminary in Ottawa, Canada. He was ordained a priest in Port-au-Prince, Haiti, in 1960.

After a year, Father Sansaricq was assigned to serve as chaplain for Haitian immigrants in the Bahamas, ministering from the Benedictine Priory of St. Francis in Nassau. In seven years in that work, he became aware of the plight of immigrants, and especially immigrants without legal papers.

When he completed his work in the Bahamas, he was given a scholarship to study social sciences at the Pontifical Gregorian University in Rome, where he received a master's degree in 1971.

That same year he was accepted to serve in the Diocese of Brooklyn and was assigned to Sacred Heart of Jesus Parish in Brooklyn's Cambria Heights neighborhood, where he served for 22 years.

In l993, he was named pastor of St. Jerome Church in Brooklyn. On June 6, 2006, Pope Benedict XVI named him an auxiliary bishop for Brooklyn. After his Aug. 22 episcopal ordination that year, he continued to minister at the parish.

"Bishop Sansaricq actually just sent an email out three days ago saying what he was going to do in organizing relief efforts at the National Haitian Apostolate" in the aftermath of the magnitude 7.2 earthquake that hit the island nation Aug. 14, said Bishop DiMarzio. "He had met the week before with the archbishop of Port-au-Prince, so Bishop Sansaricq was very active right to the end."

The Haitian Apostolate held an Oct. 5, 2019, celebration to mark Bishop Sansaricq's 85th birthday and honor him for his nearly 60 years of service as a priest.

In an opening speech, Dr. Pierre-Paul Cadet, president of the Association of Haitian Physicians Abroad, heralded the bishop's efforts for Haiti.

"Bishop Sansaricq has really fought for justice, and has been the forefront of all messages of hope, especially for our brothers and sisters in Haiti who are suffering, pressed for justice, peace, equality," Cadet said. "He has been a powerful voice in the struggle."

"His heart and his palms are open," said Rosanne Barber in an interview with The Tablet, Brooklyn's diocesan newspaper, during that celebration two years ago. "He is a teacher, in all sense of the word. He has really advocated for our community."

Parish | Brooklyn auxiliary who was first Haitian American bishop in U.S. dies at 86

Jesus would laugh at a lot, says Colbert's 'chaplain'