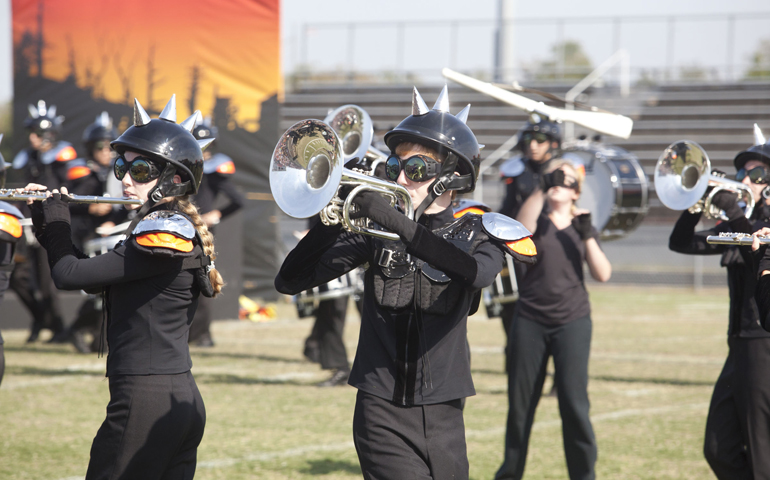 Ever since Kenley Cadena picked up a flute to perform in the band at her Catholic grade school in Nashville, she knew what she wanted to do.

"I wanted to be at the top," she said. "Ever since then it's been a passion, and I love it so much."

On Thursday, Cadena and fellow members of the Father Ryan High School Marching Band will be at the very top, performing the highest profile gig of their lives -- at the Macy's Thanksgiving Day Parade in New York City.

The band will perform in the holiday kickoff tradition, in front of an estimated 3 million live spectators, for the first time in school history. Father Ryan was one of only 11 marching bands selected to participate out of more than 150 applicants from around the country.

Interviewed before their New York trip, Cadena and her band mates were laser-focused on perfecting their 1-minute, 15-second Macy's routine, which will be taped live and broadcast into millions of homes on Thanksgiving morning. In addition to the choreographed routine performed for the television cameras, the Father Ryan band will be entertaining the crowds as they march through the streets of Manhattan.

For band field commander and Father Ryan senior Kevin Finnegan, leading his band in the parade "is something I've been dreaming about for years."

A native New Yorker, Finnegan always watched the parade on television with his family growing up. On Thanksgiving morning, 35 of his family members planned to be in the bleachers on the parade route. "I can't imagine what it will be like," he told the Tennessee Register, the newspaper of the Nashville Diocese.

"It's something they'll never forget," said Jereme Frey, a Father Ryan band co-director who marched in the Macy's parade with the McGavock High School band in 1992. "It's a wall of noise and people," he said. "It's awesome."

Being among the chosen few for the parade is, in a sense, a reward for the decades of hard work that band director Jeff Schletzer, his past and current co-directors, and all the former student musicians put into building the program.

"This is a culmination of the work the kids started a long time ago," said Schletzer, who helped revive Father Ryan's band when he came on staff 32 years ago.

Schletzer has helped move the Father Ryan band from football pep support to champions in national and international band competitions. Last year, the band won first overall in the Southeastern Regional for Bands of America competition; they were also the sole recipient of National Bands of America's Al Castronovo Memorial Esprit de Corps award for most spirit.

While victory in competition can be thrilling for band members, it's not something that many people outside of the band connect with the way they have with the Macy's bid.

"This has absolutely raised the profile of the band," Schletzer said. "It's nice to see them recognized in a way they deserve."

The Father Ryan band, including drumline and color guard, includes 83 members, which is markedly smaller than most other bands considered for a slot in the parade. For example, when Frey marched with McGavock, they had almost 230 members.

"We use any trick we can to set ourselves apart because of our size," Frey said of the Father Ryan band. "These kids have to be as clean and polished as they possibly can," he said. "Big bands can hide a lot of stuff, and we can't."

Until they left for New York, it was "a full court press" of parade prep, Frey said. For six weeks, the band rehearsed in the student parking lot inside a large square with a giant white star in the middle, designed to match the exact dimensions of the TV taping area during the parade.

Frey noted the Father Ryan band students "make a lot of sacrifices, and they have a lot of pride and ownership in what they do."

Band parents are also an integral part of the experience.

"It takes a village," said Paul Bell, who has seen two sons through the Father Ryan band. His son, Sebastian, a French horn player, will be marching in the Macy's parade. "There's not one who takes credit for it; it's the whole," he said. And parents are a big part of that whole.

Band parents are everywhere the band is, sewing uniforms and flags, serving meals for band members, spearheading fundraising efforts, helping the band load and set up instruments on the field.

[Theresa Laurence is on the staff of the Tennessee Register, the newspaper of the Diocese of Nashville.]