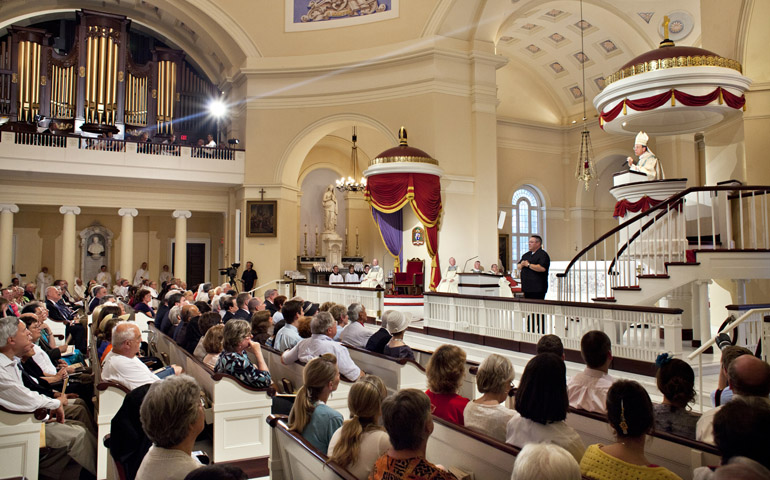 Archbishop William Lori of Baltimore delivers the homily during the opening Mass for the U.S. bishops' Fortnight for Freedom campaign June 21 at the Basilica of the National Shrine of the Assumption of the Blessed Virgin Mary in Baltimore. (CNS/Catholic Review/Tom McCarthy Jr.)

As Drew Burkemper got up to preach, the weight of his task was evident. His classmate at Kenrick-Glennon Seminary, Adam Maus, had just pretty much killed it.

Like Burkemper, Maus and other Catholic seminarians were told to prepare and deliver to his class a homily for an imaginary event.

Maus' scenario had been a wedding between a 42-year-old bride with four children and her groom, who had recently returned to the Catholic church. The nine other seminarians in the room loved his approach, showering him in glowing feedback.

Burkemper was up next, faced with a preaching scenario that would challenge any 23-year-old priest-to-be. His homily was for a marriage between a Catholic man and a Jewish woman.

As he began, he worked hard on his delivery, as his professor had taught him. "Father Wester is big on delivering the homily," Burkemper said later. "Not just reading it."

Fr. Don Wester, pastor of All Saints Catholic Church in St. Peters, Mo., is Kenrick's lecturer of homiletics -- the art of preaching.

He believes homilies should be practical and direct -- that they should draw a connection between the everyday struggles of parishioners and biblical truths.

And it's exactly the kind of preaching that U.S. Catholic bishops are hoping for as part of a new national effort to foster better Catholic homilies.

At their annual fall meeting this month, the U.S. Conference of Catholic Bishops voted overwhelmingly to accept the new preaching document, their first since 1982.

The document is an admonishment of poor preaching, saying the bishops are "aware that in survey after survey over the past years, the People of God have called for more powerful and inspiring preaching. A steady diet of tepid or poorly prepared homilies is often cited as a cause for discouragement on the part of laity and even leading some to turn away from the Church."

St. Louis Archbishop Robert Carlson had been working on the document for almost two years with Wester among his advisers. In an interview, the archbishop said his own father had strong feelings about preaching.

The bishops had been discussing the possibility of a preaching document since 2006. But Pope Benedict XVI inspired them to act, issuing two "apostolic exhortations" in the last five years.

In the first of those statements, Benedict wrote in 2007 that "given the importance of the word of God, the quality of homilies needs to be improved."

Then, in a 2010 statement, the pope offered more specifics.

"Generic and abstract homilies which obscure the directness of God's word should be avoided, as well as useless digressions which risk drawing greater attention to the preacher than to the heart of the Gospel message," he wrote.

Carlson, who heads the bishops' Committee on Clergy, Consecrated Life and Vocations, said the bishops expected the new preaching document would be used not only by seminarians, but also by bishops, priests and deacons.

"You can't sit down Saturday evening, type out a homily and expect to move people's minds and hearts," Carlson said.

Jesuit Fr. David Meconi, a theology professor at St. Louis University and editor of the journal Homiletic & Pastoral Review, said the church needed "preachers willing to preach out of their own heart."

"Too many priests read as if they're giving a lecture, and others don't do any preparation and just wing it," Meconi said. "The heart of a good message is pathos, passion."

According to the bishops' new document, and using the Catholic term, "catechize," for teaching the faith, today's preacher "must realize that he is addressing a congregation that is more culturally diverse than previously, one that is profoundly affected by the surrounding secular agenda and, in many instances, inadequately catechized."

Wester said he believes the document does a good job suggesting a balance. On one side is the responsibility of the priest to use his time in front of a captive audience each Sunday to teach, and on the other is the duty to foster a mystical connection between God and his flock.

"If we want people to understand their faith, catechesis has to make sense for them in their own life," Wester said. "Sometimes I want you to know I'm your pastor, an authority. Jesus was not afraid to speak the truth, and then love people."

Carlson said another feature of the new document is the bishops' encouragement of preachers to examine their own faith.

"In this document we ask preachers to also grow themselves spiritually so that what they're communicating has powerful meaning in witness of their own life," he said.

At Kenrick on a recent afternoon, Wester had his students spend the first half-hour of class contemplating verses from St. Paul's letter to the Philippians.

One of them read the verses aloud to the rest, and then the 10 young men sat in silence, some reading the text, others with their eyes closed in prayer or thought.

The students repeated the process two more times, and at the end of the 30 minutes, shared with each other how the scripture moved them.

Wester told the seminarians that after a while in the real world, the temptation to skip the meditation on scripture and move directly on to writing the homily would grow. He urged them to stave off pragmatism for prayer.

That's advice Burkemper took to heart as he prepared his faux homily for the marriage between a Catholic man and a Jewish woman.

His classmates were impressed with the final product. They thought he did "a great job discussing the covenant relationship in both faiths." They also liked that it was "short, sweet and to the point." Wester said it clocked in at five minutes and seven seconds.

"At first you have to get them up there, and let them know they're not going to have a heart attack," Wester said. "But after they get over the initial fear, it's so neat watching these guys get their legs."

[Tim Townsend writes for The Post-Dispatch in St. Louis.]