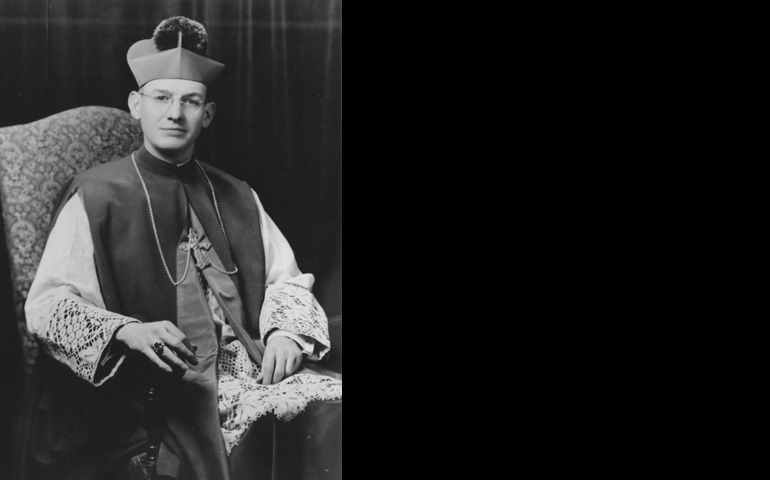 Bishop Vincent Waters, the third bishop of Raleigh, N.C., is pictured in an undated photo. (CNS/courtesy diocese of Raleigh)

Raleigh, N.C. — Sixty years ago, before Rosa Parks ushered in the civil rights movement by refusing to budge from a bus seat, and before the Supreme Court declared segregated public schools unconstitutional, one courageous bishop desegregated all Catholic churches in his state in one fell swoop.

Bishop Vincent Waters of Raleigh issued a pastoral letter 60 years ago in June ordering the desegregation of all churches in what was then a statewide diocese.

In "the church Christ founded," Waters wrote, "all the members, no matter of what race, what nation, what qualities of body or of mind, or with how many or how few possessions, all are in one communion if they belong to that one church. Anything to the contrary is heresy."

"The church, that calls itself Catholic today, because it is Catholic, still has more people of colored skin in its one communion than those who call themselves Caucasian," Waters added. "This Catholic Church has been meeting and solving by Christ's teaching race problems in all parts of the world: in India, in Africa, in Central America, in Mexico, in the West Indies, in the United States, in the North, in the East and in the West. It will also solve them in time in the South."

As Waters' pastoral letter neared its close, he issued decrees using capital letters: "So that in the future there can be no misunderstanding on the part of anyone, let me state here as emphatically as I can: There is no segregation of races to be tolerated in any Catholic church in the Diocese of Raleigh. The pastors are charged with the carrying out of this teaching and shall tolerate nothing to the contrary. Otherwise, all special churches for Negroes will be abolished immediately."

Waters added, "I am not unmindful, as a Southerner, of the force of this virus of prejudice among some persons in the South, as well as in the North. I know, however, that there is a cure for this virus and that is our faith. Many Southern boys facing death together in the trenches will bear me out. I revolt against our children being infected with this virus, when men and women of good will everywhere can preserve them from it. The virus will not die out of itself, it has to be killed by being exposed to the light of faith."

After describing Satan as "the archenemy of the church" with his power to divide, Waters said, "My only sorrow is the fear that I shall not convince you of the wiles of Satan. But I shall be able to convince you if I love you enough, and if you love me you will understand, for God has first loved us."

Bishop Michael Burbidge of Raleigh, in commemorating the 60th anniversary of Waters' pastoral, said in a statement, "It is with gratitude to Our Lord that we remember the ways in which many of the wounds of segregation have been healed in the last 60 years. Yet, it is also with vigilance that we renew our commitment to attend to any situation where the dignity of the human person is threatened, whether through segregation or violence or even by omission."

At the core of Waters' pastoral, Burbidge said, was "about forming a fundamental disposition of love for another. As such, we are guided by Our Lord to look closely at all of our relationships, including how we encourage and promote economic and educational opportunities for others."

Requiem for a closing church

Interested in helping at World Meeting of Families? Volunteer