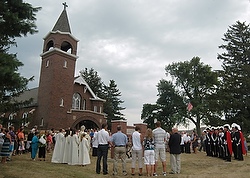 Members of St. Boniface Parish in Seymour, Ill., gather under a cloudy sky to celebrate the 100th anniversary of their rural church July 8. While most congregations may wish that rain not spoil a church celebration, parishioners in the farming community were hoping for showers to break a long drought. (CNS/Catholic Post/Tom Dermody)

SEYMOUR, Ill. -- The desperation of drought-stricken farmers in the Midwest was evidenced by what topped Mary Margaret O'Connor's "day's best memory" list as the July 8 celebration of her parish church's centennial came to a close.

"It looks like we're going to get rain," said O'Connor, eyeing dark clouds approaching the grounds of St. Boniface Church, where a tent had been erected for a parish luncheon.

Prayers to keep rain away from an outdoor parish celebration months in the planning and including a visit from the diocesan bishop would usually be the norm. But not this summer at St. Boniface Church, a Catholic landmark rising above the fertile corn and bean fields of western Champaign County.

As in much of the Midwest, farmers in Seymour are on the edge of disaster from scorching heat and lack of rain.

"Hopefully, it will come," Father Robert Lampitt, parochial vicar of the rural parish, said of the rain before leading the meal blessing.

"It would be a godsend," agreed Bill Klein, a fourth-generation farmer whose great uncle willed the rural parish an 80-acre tract of land upon his death in 1954. The field north of the church is planted in soybeans this year.

Klein, O'Connor and other farmers of St. Boniface Parish compared the current drought to one in 1988. The region is 10 inches or more below normal rainfall for the year. What rain comes now may already be too late for some corn crops but would be greatly benefit soybeans.

As of early July, about 60 percent of U.S. corn acreage was experiencing moderate to extreme drought, up from 49 percent a week earlier, according to the U.S. Department of Agriculture.

"This (drought) is one of those events that supposedly comes along once in a lifetime," said Klein, whose two sons also farm. "I've seen four," he added, though Klein claimed the fields around St. Boniface Church often seem to get rains that may miss other areas.

Farming brothers Bernie and Greg Magsamen, who served as ushers for the centennial celebration, were among those involved in restoring and painting a century-old bell and building its new brick housing. The refurbished bell, taken down three years ago, was named St. Isidore after the patron saint of farmers by a vote of parishioners.

His brother kept an eye on the sky, hoping for what he called "a million-dollar rain" and acknowledging there is little that a farmer can do without needed moisture.

"We're at the mercy of the Lord," said Bernie.

The rain did come down near the end of the afternoon, but the scattered showers totaled just one-tenth of an inch; areas north of St. Boniface received up to an inch.

But as St. Boniface celebrates its history, the parish must also "be ready for God to amaze us" in the future through the power of his grace, said Peoria Bishop Daniel R. Jenky.

"Let us thank God for everything that has brought us to this moment," said the bishop, "and be open to surprises God may have in store."

The Associated Press reported that in some places in southern Illinois, farmers started mowing down their corn fields -- the cobs had no kernels growing on them -- and baling the dried and withered stalks to feed as hay to their animals. Rainfall had totaled less than one inch since late April in some parts of southern Illinois.

An organic farm in southwestern Pennsylvania notified its customers July 9 that it was sending its workers out to the fields at 3:30 a.m. to harvest corn by hand before the sun rose to sear both the corn and the pickers.

The USDA had said earlier that food prices around the nation would rise up to 3.5 percent this year, although it would not be known until harvest time how much of that increase could be attributed to drought-stricken corn crops.

Farmers had planted an estimated 96.4 million acres of corn this spring, the most since 1937, in anticipation of continued strong prices for corn. For those farmers fortunate enough to avoid the drought, it could prove a windfall. Corn prices have spiked from just more than $5 a bushel in May to $7.33 July 9 on the Chicago Board of Trade, according to CNN.

Yields will be down because of the drought -- the USDA issued an estimate July 11 of 146 bushels per acre, a drop of about 12 percent from the 166 acres it had forecast in spring -- but advances in hybridization over the past decade have created more varieties of corn that are resistant to drought. By comparison, the yield in 2002, a nondrought year, was 129 bushels per acre.