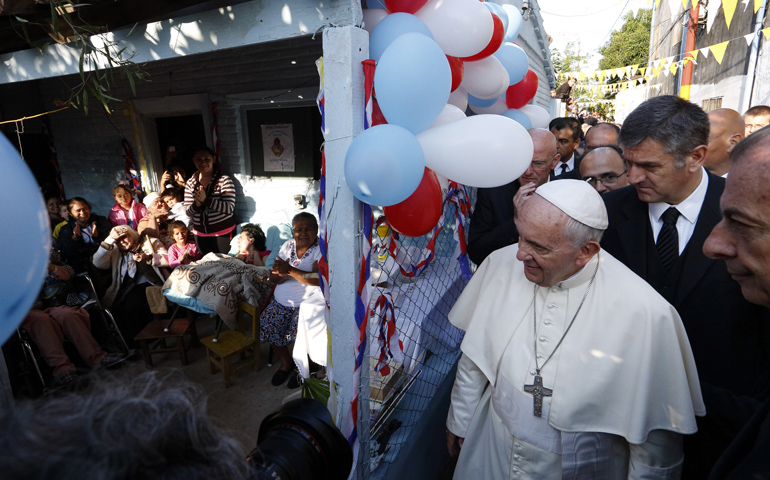 Pope Francis arrives to meet people gathered at a house as he visits Banado Norte, a poor neighborhood in Asuncion, Paraguay, on July 12. (CNS/Paul Haring)

In the growing corpus of Pope Francis pronouncements -- in homilies and speeches and encyclicals -- an eloquence adheres that might safely be characterized as singular in quality in the long history of papal literature. It is an eloquence eminently accessible, born of personal experience and shaped primarily by his love of the poor.

It is not a distant love or a romanticized notion out of which he speaks. He doesn't make heroes of poor people or conjure some noble purpose out of poverty that will somehow be fully realized in the next life.

Quite the opposite. Transcendence is not reserved for some other reality. For Francis, the Christ we worship in the quiet of the sanctuary is the Christ of the streets. Francis is about real here-and-now situations in very plain language, and that language at times is disarmingly undiplomatic.

Indeed, in the United States, the eloquence is difficult to discern. The words make us squirm.

During his speech in Bolivia to members of popular movements, he said: "When we look into the eyes of the suffering, when we see the faces of the endangered campesino, the poor laborer, the downtrodden native, the homeless family, the persecuted migrant, the unemployed young person, the exploited child, the mother who lost her child in a shootout because the barrio was occupied by drug dealers, the father who lost his daughter to enslavement ... when we think of all those names and faces, our hearts break because of so much sorrow and pain. And we are deeply moved."

It was a telling moment. No one smirked or thought it an exaggeration that he places himself fully within those circles. He's been there. It is part of the authenticity that makes his words not only bearable when they might understandably repel, but actually inviting and enticing.

His exhortation to walk to the margins is not a rhetorical flourish; his now-familiar reference to the "art of encounter" is not metaphor. The images he supplies repeatedly in real time and circumstances demonstrate precisely what he means -- move into the margins of society among the broken, the disfigured, the financially destitute, those behind bars. They are the first preference for his attention and energy, the starting point from which flows his understanding of the heart of the Gospel and the Christian life.

How many of us have heard during a retreat or day of recollection some version of the "inverted triangle," a simple image to explain how the Christian understanding of what is important in life might be different from what is preached by Wall Street or the daily bombardment of ads encountered in every corner of life.

Francis goes deeper than explanation, well beyond mere tolerance. And this, perhaps, is what makes us nervous here in the First World, the developed world, the rich North. This pope is not ideological or partisan. He is radical in the most essential sense -- going to the root of things. It can't be overstated that an indispensable part of his formation occurred steeped in the "storms of people's lives" in the slums around Buenos Aires, Argentina. These are not places where one meets perfect nuclear Catholic families. These are not places of investment portfolios, career ladders, elegant dinners and heady intellectual conversation. These are not places that influence a country's economic or military policies. But they are his starting point, the first lens through which he views the rest of the world.

Those who wish to define Catholic orthodoxy by a narrow list of sexual sins are inclined to describe themselves as countercultural, fighting the mighty forces of secularism. Come September and Francis' visit, we all are likely to be shaken to our roots by a much-expanded definition of Catholic orthodoxy and a far more demanding idea of what it means to be countercultural in the United States.

"You, dear brothers and sisters, often work on little things, in local situations, amid forms of injustice which you do not simply accept but actively resist," he told the community activists in Bolivia. He was applauding them and their heroic work for "standing up to an idolatrous system which excludes, debases and kills."

Those in the room needed no further explanation of what he meant by "an idolatrous system." It is, in his words, "a globalization that excludes." He is about to arrive in globalization central.

A version of this story appeared in the July 31-Aug 13, 2015 print issue under the headline: Pope's eloquence makes us squirm.