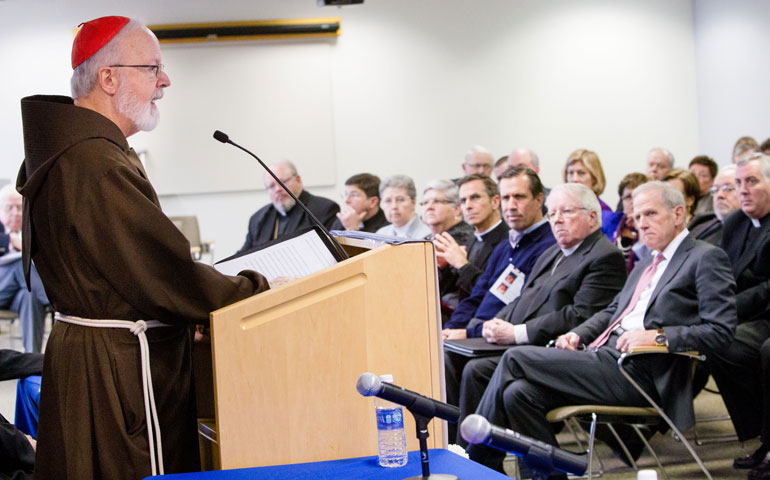 Boston Cardinal Sean O’Malley speaks at a news conference Nov. 15 to announce his approval of a plan to group the archdiocese’s 288 parishes into 135 “pastoral collaboratives.” (CNS/The Pilot/Gregory L. Tracy)

Rather, "Disciples in Mission" calls for reorganizing the 288 parishes into 135 collaboratives: groupings of one to four parishes led by one pastor, a pastoral team, and single finance and pastoral councils.

Largely a change in structure and staffing, the plan will maintain each parish's identity -- its name, canonical rights, buildings, financial assets and obligations -- while attempting to strengthen parishes toward a renewed focus on evangelization.

"If you wanted a one-sentence summary of 'Disciples in Mission,' it is: Parish-based evangelization works, and we can train for it, but to do so, we need strong parishes," said Fr. Paul Soper, who was named the archdiocese's director of pastoral planning alongside the pastoral plan's announcement.

Evangelization is the vehicle driving the plan, which is divided into two parts: part one, on strengthening parishes through collaboratives; part two, on re-energizing pastoral leadership through extensive training.

The belief is that shared resources and personnel will relieve the financial strains of individual parishes, permit more competitive salaries to lay ecclesial ministers, and thus allow greater focus on mission and evangelization. The increased training, augmenting that mission, is expected to represent the bulk of costs associated with the plan, and are still being finalized, the archdiocese said.

The plan will play out in four phases over five years, with the first-phase collaboratives, around 15 in all, to be announced in early January 2013. Pastor assignments will come in March, and the collaboratives will be formally inaugurated July 1. At the beginning of 2014, a pastor-appointed team at each collaborative will begin writing the local pastoral plan, expected to take a year to complete.

Factors influencing collaboratives include geography, demographics, and past working relationships among parishes, in addition to meeting minimum targets of 1,600 parishioners per priest (the national average, but almost double Boston's current average), and an offertory of $500,000 -- half of which is expected to cover staffing costs.

"I think that we're at a critical moment in the life of the church in the United States, and in Boston in particular," Soper said. "It's really something of a turning point."

Moving from a "one-pastor, one-parish" model to "one-pastor, multiple-parishes" is a significant step, said Capuchin Fr. David Couturier, who headed pastoral planning from May 2009 to May 2012, but has since left the office.

"This puts the relationship of priest to people in a very new light," he said, adding that it will present Boston's 300-plus priests with new challenges while increasing their responsibilities.

Fr. John J. Ahern, who has served as pastor of three parishes since May 2009, said the challenge of serving multiple parishes becomes maintaining relationships.

"Sometimes I feel like I'm an absentee father, that I have three families, and sometimes I'm pulled in too many directions, and I don't think I give either community their just due," he told NCR, adding that his friendship with God has deepened under the circumstances.

Still, Ahern said he is optimistic about the plan. He likes the emphasis placed on training for priests and lay leaders, and its "better sense of team."

"I think there's a better sense [for the parish to work effectively] that it's just not the pastor or the priest," he said.

The realities leading to the restructuring in Boston are a familiar refrain across the country: dwindling Mass attendance, fewer priests, strained finances and, more often than not, closing parishes.

In a city where turnstiles at Fenway Park boast a historic sellout streak of 793 consecutive Red Sox baseball games, its parishes have seen Catholics attending Mass diminish to roughly 16 percent. In the 1970s, 70 percent of Boston Catholics attended weekly services.

"There's been a huge migration of Catholic population over the course of the 20th century and it's finally filtered down to the point where dioceses in the Northeast and the upper Midwest are having to face the reality that the buildings were left behind," said Mary Gautier, a senior research associate at the Center for Applied Research in the Apostolate at Georgetown University in Washington, D.C.

The reality, Gautier said, is that younger generations have left cities for the suburbs, and moved into the South and West, abandoning former church strongholds populated largely through the enormous immigration waves of the 19th century.

In Boston, they have reached their second verse of this tune, as "Disciples in Mission" becomes the second attempt in eight years at parish reorganization. While the song remains mostly the same, the strategy has changed.

The 2004 plan shocked many unprepared parishioners with news their parish and its church were closing; in all, 65 parishes were to be suppressed, and 60 churches to be shuttered. Six parishes still have pending appeals at the Vatican's supreme court, and full resolution of those cases could take another year. Two parishioner communities continue to occupy their to-be-closed churches.

Acknowledging the pain that plan brought, the archdiocese emphasized greater transparency in the development of the latest restructuring. In 2010, O'Malley visited various deaneries to meet with priests to understand their priorities and needs. The framework provided a starting point a year later for the Archdiocesan Pastoral Planning Commission, a 19-member group of a mix of religious and lay leaders.

Through 40 direct meetings and localized parish listening sessions, the commission received feedback from some 25,000 people before forming its plan. Since then, pastors have been consulted as collaborative groupings are formed; a request for a different grouping is not uncommon. The idea is not to surprise anyone, Soper said, but rather to avoid "drama" through an open process.

Even with the increased transparency, Soper realizes the pain of 2004 will distort how some view this new plan, presenting a prerequisite hurdle to overcome before scrutiny of the new plan's details even begins.

"People look at this with greater wariness because of our experience in 2004, there's no doubt about that. We have a higher hill of credibility we have to get over," he said.

Among the skeptical is Peter Borre, leader of the Boston-based Council of Parishes, which formed in the wake of the 2004 parish closings.

Borre currently represents two Boston parishes in their appeals, and has worked with parishes facing closure in other dioceses -- notably representing several parishioner groups in the Cleveland diocese among 11 total that won precedent-setting appeals in Rome to prevent their church doors from shuttering.

"This is another round of parish closings. There's no getting away from that," Borre said, calling the collaboratives a "first move." He predicted that the new pastoral teams will evaluate surpluses -- multiple rectories, duplicate staff, etc. -- resulting from the parish groupings, and look to reduce redundancies, including churches.

"You can never say that a parish will never ever close," Soper said. "This plan does not envision large-scale closings of parishes; as a matter of fact, it envisions, if any parish ever has to close, it would be because absolutely every possibility has been tried to keep it open and it just hasn't worked."

But other questions remain.

Portraying the pastoral plan through the lens of the new evangelization has left many wondering what exactly that means, and what it will look like.

The text of "Disciples in Mission" does not include specific details about evangelization campaigns, nor does it set target figures to gauge effectiveness, a critique Couturier raised, pointing to national figures suggesting less than half of any age group under 70 regularly attends Mass.

Soper said those were intentional decisions, in order to allow parishes flexibility in adapting to Catholics' differing needs throughout the diocese. His office continues to meet with parish representatives to discuss what works, and what they would like to do.

The gamut of successful strategies has run from traditional door-to-door visits in some areas to Fr. John Unni asking young Catholics at a Sunday night Mass at St. Cecilia in Boston to take out their smart phones -- in church -- and set their status to "I'm at Mass."

Ahern, the pastor of three parishes, said there's a cautious excitement among parishioners -- relieved that no parishes will close, but unsure if the resources exist to see the plan succeed.

Others outside the diocese doubt whether a model that doesn't close churches is sustainable.

"I'm not sure that's it's realistic to even assume that you wouldn't have to have continuing reorganization," Gautier said. "Unless people start bringing their parishes with them when they move, the fact is the building stays, but the people move."

"It is possible that Boston's plan could cause less disruption to the faith life of parishioners and that is positive," said Jean Welter, director of research and planning in the Chicago archdiocese. "On the other hand, there can be financial and neighborhood consequences to leaving churches open."

"The positive things that we can say," Couturier said, "is ... this plan recognizes that simply restructuring is not enough. And that's a significant change from 2004. What this plan says is that we have to restructure and we have to evangelize in new ways."

To Soper, such suspicion is not an obstacle to the pastoral plan's success, but rather "a sign that [parishioners are] taking it seriously."

"They should be wary of it. They should be watching this carefully. … This is not a moment to be reducing the involvement of people in the plan, or getting them just to dive into something blindly," he said. "This is a moment to get them engaged in the whole process."

A version of this story appeared in the Dec 21, 2012-Jan 3, 2012 print issue under the headline: Evangelization key to new pastoral plan in Boston.