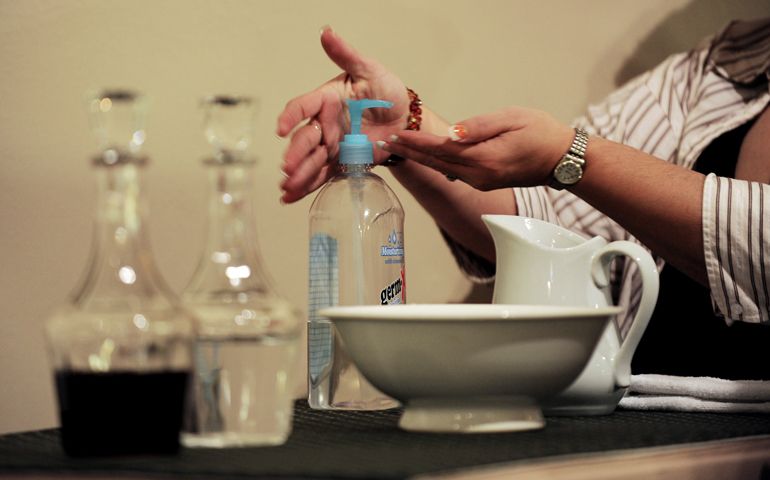 An extraordinary minister of holy Communion uses hand sanitizer kept on the credence table during a 2009 Mass at Our Lady of the Americas Church in Rochester, N.Y. Faith communities in the Rochester Diocese were urging "common sense" measures to avoid spreading the H1N1 and seasonal flu viruses, measures that could be put back into place with this year's flu epidemic. (CNS/Catholic Courier/Mike Crupi)

Washington — This year amid the flu epidemic in the United States, several dioceses have issued recommendations for receiving Communion, offering the sign of peace and even attending Mass.

According to a report by the U.S. Centers for Disease Control and Prevention, the flu season started earlier than usual this year. As of Wednesday, 47 states were reporting widespread influenza activity, up from 41 states the previous week. The report also stated that the flu was beginning to subside in some areas, especially in the Southeast, where it first appeared.

The U.S. Conference of Catholic Bishops posted on its Facebook page and blog the recommendations it offered in 2009 regarding the flu and church practices.

The recommendations stressed that the diocesan bishop should always be consulted regarding any changes or restriction of options in the celebration of the liturgy.

It also noted that in localities where outbreak of influenza was high, "bishops have introduced several liturgical adaptations in regard to such practices as the distribution of holy Communion and the exchange of the sign of peace in order to limit the spread of contagion."

The recommendations urged the use of common sense and basic hygiene stressing that priests, deacons and extraordinary ministers of holy Communion should "always wash their hands before Mass" and that the "the faithful should be instructed not to receive from the cup if they feel ill."

In mid-January, several Catholic dioceses posted guidelines on their websites about liturgical practices during flu season.

Guidelines posted online by the Washington Archdiocese stressed that "no one is ever under an obligation to shake hands during the sign of peace" and that a statement, bow or other gesture is appropriate.

It also noted that "no one is ever under an obligation to receive from the chalice" and that "anyone who is ill, or suspects he or she is ill, should refrain from receiving from the chalice out of good will and consider receiving the host in the hand rather than by the mouth."

The archdiocesan guideline also urged Catholics who are unwell to "consider remaining at home" and if possible, watching the televised Mass.

Priests in the Boston and New York archdioceses received letters in mid-January reminding them they could suspend distributing wine from a the Communion chalice and suggesting they ask parishioners to bow instead of shaking hands to wish one another the sign of peace to curb the spread of flu germs.

Some bishops went a step beyond recommendations and stressed that during the flu season, Communion would only be offered in form of consecrated bread and parishioners should not shake hands at the sign of peace.

Bishop Peter Libasci of Manchester, N.H., said the extreme flu season in New Hampshire made it necessary to follow such precautions.

"As always, your pastoral judgment is critical to ensure that these temporary changes are seen as being in the best interest of the faithful, as well as ensuring that no one with special circumstances is excluded from the table," he wrote.

"Once the flu season is over, we will quickly reinstitute our traditional means of sharing the sign of peace and norm of distributing Communion from the cup for those parishes that elect to do so at each Sunday celebration of the Eucharist," he added

Bishop Michael Pfeifer of San Angelo, Texas, also made the same recommendation. In a Jan. 11 letter to diocesan priests, he requested that they "suspend the use of the Communion cup at all Masses" until further notice. He also recommended that parishioners not offer the sign of peace with a handshake, but simply offer the exchange verbally or with a bow.

"Once the danger of transmitting the flu has lessened, I will restore the use of the Communion cup," he wrote.

On marriage, the bishops should start over