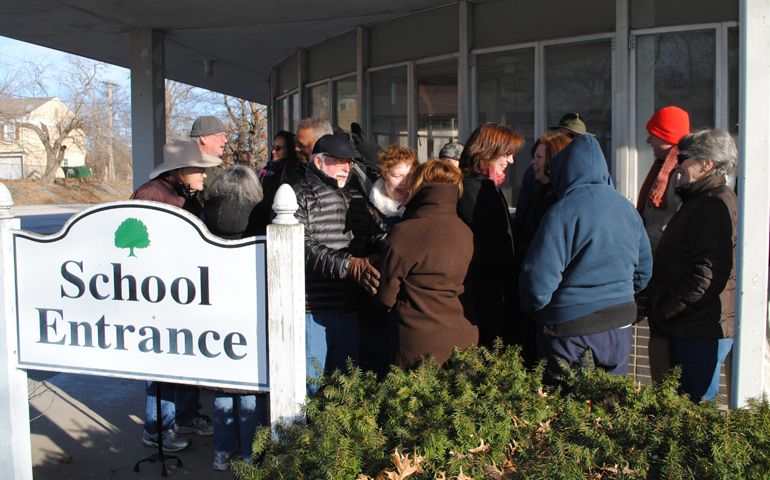 Kansas City, Mo. — An empty school building in midtown Kansas City, Mo., has become the subject of a heated debate between its next-door parish and the local bishop.

The building once housed St. Francis Xavier Parish's school, and parishioners had hoped to renovate it for community-enhancing programs. But Kansas City-St. Joseph Bishop Robert Finn has begun working with developers to create a faith-based apartment complex targeting university students.

The developers and community members met Jan. 28 to discuss the final design, which the local City Plan Commission will vote on March 17.

The site could be a prime location for either vision. Located just west of Jesuit-run Rockhurst University and east of the University of Missouri-Kansas City, the building could be demolished and replaced with an apartment building used by college students seeking a Catholic atmosphere. Providing evangelical Catholic missionaries to UMKC students was one of Finn's first initiatives since becoming bishop of the diocese in 2005.

The neighborhood and parish, however, hoped to take advantage of its location, seeing it as an opportunity to unite the east and west sides of Troost Avenue, a street considered a racial and economic dividing line in Kansas City's urban core.

In 2012, Finn and the parish agreed upon four criteria for whichever project is pursued: It must be self-sustaining, provide a parish hall for St. Francis Xavier, include a space for missionaries of the Fellowship of Catholic University Students (FOCUS), and receive final approval from Finn.

The last condition makes many of the parishioners think their ideas don't have a chance.

"We met several times [to discuss proposals], and the bishop clearly said he was only interested in the Catholic student housing project," said parishioner Ken Spare.

Nearly two years ago, parishioners and a neighborhood group, the 49/63 Neighborhood Coalition, worked with an architectural firm, BNIM, to carry out a needs assessment of the area. The result was a 19-page plan that made several suggestions for the existing building, such as a parochial or charter school, space for adult education, a child development center, community gardens, assisted living housing, an event space, and more.

While all these ideas included financial planning and options for hosting FOCUS groups, the bishop shot down each proposal because, according to Spare, Finn said the ideas did not meet the broader mission of the diocese.

Instead, Finn pushed ahead with his plan and brought on Domus Development to undertake the Bellarmino Catholic Center, a faith-based apartment development.

In partnership with EPR Properties, the Domus plan is to create Catholic housing communities for students at secular universities. To gauge interest in housing on this disputed property, Domus worked with Brailsford & Dunlavey, a program management and facility-planning firm that specializes in colleges and student housing. From that partnership, a feasibility and market study showed there was sufficient demand for this project to continue, with students expressing enough interest to fill 386-660 beds.

Tri-North Builders, a construction management firm based in Wisconsin, considered the four criteria laid out by Finn and the neighborhood coalition, and in three years has designed three plans, each time considering neighborhood feedback. But the main change each time has been only in size, with the building originally being five stories with 363 beds.

The latest proposal, presented by Steve Harms, Tri-North's director of pre-construction services, to parishioners and neighbors at St. Francis Xavier Jan. 28, would require demolishing the existing building and includes the following:

While the market study showed that this project is financially viable and surveys among students demonstrated interest in this housing option, the majority of the 85 community members who attended the presentation voiced concerns.

Many of the parishioners' and neighbors' questions regarded its sustainability and potential consequences: Has the diocese considered the high percentage of UMKC students who commute? Students may be interested, but would the high rent sit well with parents? Won't this parking ratio affect the neighborhood? Have Rockhurst or UMKC voiced interest in or a need for additional housing? Can the already cash-strapped diocese afford this risk? With only 10-30 FOCUS students previously attending meetings at the church, will there be enough interest to fill a faith-based building? What will happen to the new building if it doesn't meet its minimum occupancy of 90 percent? How is it the mission of the church to provide housing options for non-Catholics?

One key frustration, however, regarded the parish hall. Not only did the presentation exclude any insight regarding the interior of the hall, leaving the parishioners curious as to what needs this project would fulfill, but it also mentioned that this hall would be shared with the residents.

Harms said it's unlikely the residents would have any need for the hall's amenities or space, and that the "shared" detail pertains more to the salesmanship of the residence hall. Still, parishioners would have to reserve the space as needed.

"For a project that is supposed to be about ministry, worship, and a refuge of light in a world of sin, it is surprising that there is so little consideration given to the needs of the church next door," said Les Cline, president of the 49/63 Neighborhood Coalition.

"What few people on the other side of this debate don't appreciate is that we community people have worked very seriously, earnestly and sincerely with the four criteria the bishop set about this project," he added. "We agreed to these principles. Now, I want to tell the bishop to live up to his own standards. We are holding fast to them."

The timing was also upsetting to the parishioners, as the final design was to be reworked between the presentation and its submittal to Kansas City's planning commission on Jan. 30, leaving little chance for the parishioners and neighborhood to respond.

"This feels like a cause," Cline said. "We are a community."

More smoke and mirrors from the Vatican on child sexual abuse

Exploring the true meaning of anti-Catholicism