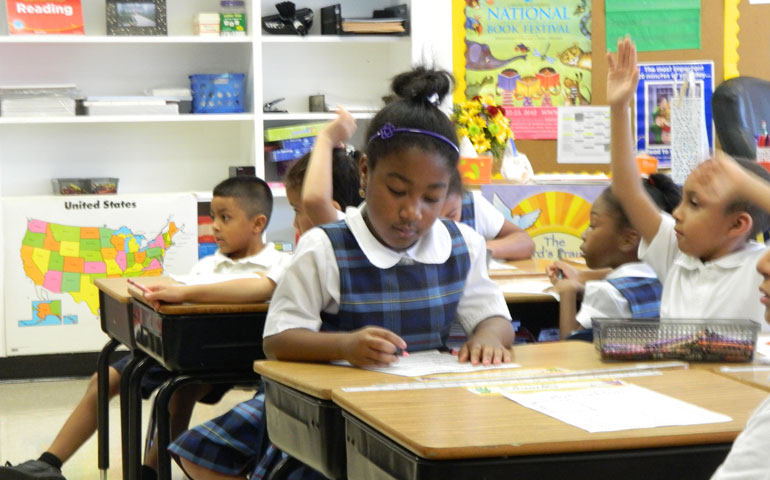 When St. Francis International School opened its doors for the first day of classes at the end of August, it seemed the world, or a good bit of it, arrived on its doorstep in Silver Spring.

More than 70 percent of the parents of its 485 students were born outside the United States -- 53 countries in all. Among them is a large representation from Central America -- Guatemala, Honduras, Nicaragua and El Salvador -- as well as from countries of West Africa, the Caribbean and South America, from the Philippines, Bangladesh and India, Vietnam and Thailand, Malaysia and a few spots in Europe.

In many ways, the school, which first opened in 1954 as St. Camillus School, represents the various arcs of change that have occurred in the church of the Northeast United States during the past half-decade. Located within the Washington archdiocese, it was part of a postwar building boom. In the earliest period of its existence, it was run entirely by Notre Dame de Namur sisters and it remained a traditional Catholic elementary school through 2010.

Enrollment surged to as many as 1,200 students by the mid-1960s, said current principal Tobias Harkleroad. By the mid-1980s, the school was entirely lay-run and the enrollment was falling as the white middle and working classes that had supplied the students for years began to move, and the neighborhoods changed in character from suburban to a densely populated urban area. By the end of the first decade of the 2000s, the school was hemorrhaging students and money, with deficits in the hundreds of thousands of dollars per year. The model had become unsustainable.

According to an article on the Education Week website, the demographic shift has been underway for more than two decades and has significant consequences. "Such tectonic shifts in the public school population are a harbinger of what is to come for the American population as a whole within the next three decades," the article states.

The Census Bureau, for instance, predicts the country will become majority nonwhite by 2043, based on higher birth rates in the Latino community and declining birth rates among whites.

Harkleroad, 37, landed at St. Camillus as principal in 2008, the same year Franciscan Fr. Mike Johnson was named pastor after spending six years as associate pastor. The two of them quickly determined that in order for the school to remain viable, its method of operation and financing had to change.

A number of parishes in the region going through the same down cycles were facing the prospect of closing. In St. Camillus' case, the parish was subsidizing deficits that annually topped $100,000, said Harkleroad.

Over the course of a year, and partnering with a nearby parish, St. Mark the Evangelist -- which ended up closing its school -- St. Camillus was refashioned and renamed. It closed at the end of the 2009-2010 school year with an enrollment of 260 and reopened the following September as St. Francis International School, with an enrollment of 435.

If the transformation was successful, it was not without pain. Staff at each school had to reapply for jobs and some weren't rehired. When initial enrollments didn't match projections, more were let go.

Four years into its new existence, however, St. Francis appears to be on stronger footing. Enrollment has increased steadily over that period and preschool classes are full.

The school is located on the large campus of St. Camillus Parish, a richly diverse community just a short drive from the nation's capital, with about 100 countries represented in a congregation that, according to the archdiocese, has grown 80 percent over the past decade. More than 10,000 adults and children are registered, with more than 4,700 attending Masses on weekends.

Major feasts are celebrated in Spanish and French, in addition to English. During the year, Masses are celebrated in each of those languages on weekends, with a heavily attended multicultural Mass on Sunday morning, where an acclaimed choir's repertoire includes material in those languages as well as Bengal, a number of African languages, and Latin. Johnson and three other friars that reside at the parish are multilingual.

The campus is tucked into one of the poorest corners along the southeast border of Montgomery County, a stark contrast to much of the rest of the county, which is one of the wealthiest in the state. The parish engages in a host of outreach ministries in this small section of the county where immigrants and others often hang by threads to society's margins.

When St. Francis opened in 2010, said Johnson, 25 percent of the students were African, 25 percent were Latino, 25 percent African-American and the remainder was a mix of Asian and white. "The kids are being formed into the world they are entering," he said, "at the same time being exposed daily to Franciscan spirituality which Toby has done an amazing job of infusing into the curriculum."

More than 60 percent of students at St. Francis are eligible for federal free and reduced-price meals, and the school as a whole qualifies for a state program that provides breakfast and snacks during afterschool programs.

Students receive close to $300,000 in financial aid from the Washington archdiocese, based on financial need. Other tuition aid is given from a combination of grants as well as support from three other parishes that are allowed to target their archdiocesan assessment for education to particular schools. And every student pays some tuition.

The student population is drawn primarily from St. Camillus (186) and St. Mark (38), with 72 students coming from a total of 29 other parishes. Students also are members of the Ethiopian Orthodox, Baptist, Lutheran, Methodist, Episcopalian, Presbyterian and nondenominational churches. Five percent of the school's population is non-Christian and includes Muslims, Hindus and Buddhists.

Being a haven from public schools is also not the mission of St. Francis.

"We need to be an excellent school academically," Harkleroad said. "We need to be able to compete with Montgomery County schools. But if that's the only reason that families want to come here, they might as well get a free education at the county schools. Families come here because we have something different."

Much of that difference has to do with a faith-based motivation and environment. The students here attend a weekly Mass. In addition to the signs of welcome at the front door in half a dozen languages, are representations of Jesus and he is depicted with children of different nationalities and ethnicities.

Harkleroad said an added unforeseen benefit of working at St. Francis is Johnson's collegial approach to ministry. The parish, he said, is not afraid to take risks or to give people responsibility for carrying out ministry. "Fr. Mike has given me a very broad opportunity to be a partner in mission rather than just an employee."

A version of this story appeared in the Sept 12-25, 2014 print issue under the headline: School finds its footing amid demographic shifts.