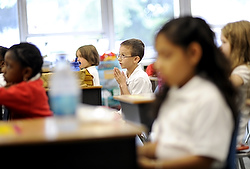 NEW YORK -- A strategic plan for the elementary schools of the New York archdiocese will close underperforming schools to reduce growing deficits, channel funds from the sale or rental of shuttered properties to an education fund and replace the traditional parish governance model with a regional structure.

The three-year plan, named "Pathways to Excellence," was released Oct. 5.

"We like the analogy of the biblical vine grower," Timothy J. McNiff, archdiocesan superintendent of schools, told Catholic News Service. "When you prune a tree, you're prepared for growth."

McNiff said the short-term target is to reduce by half the subsidies the archdiocese gives to struggling schools. "We can only sustain deficit spending for so long," he said.

In 2009, the archdiocese spent $30 million to support needy parishes and schools.

Implementation of the strategic plan has already begun. A "reconfiguration steering committee" of principals, pastors and lay representatives will make recommendations for school closings and mergers to the superintendent during the first week of November.

The archdiocese will consider appeals and alternate financing arrangements before implementing changes at the end of the 2010-11 school year. McNiff said students in closed schools would be encouraged to enroll in "the next neighboring Catholic school."

Archbishop Timothy M. Dolan of New York has repeatedly pledged that there will be a seat in a Catholic school for any child who wants it. He told CNS that "Pathways to Excellence" is "not the silver bullet," but the beginning of a recovery of confidence in the school system.

Under the strategic plan, monies realized from the sale or rental of closed schools will be used to establish an archdiocesan-wide education fund. McNiff said, "The Archdiocese of New York has something no other diocese has, namely Manhattan." He said the sale or rental of church-owned properties in New York would allow the archdiocese to "reinvest in our school system."

McNiff said the details of the education fund are not yet in place but will be developed in collaboration with pastors.

In the past, parishes were allowed to retain funds derived from the sale or lease of unused buildings. Archbishop Dolan said, "To maintain integrity and respect donor intent, if a parish is making money from a closed school, a chunk of the money needs to follow students to (other) Catholic schools."

The strategic plan moves away from parish-based elementary schools and creates regional school boards to devise "viable governance models" that may vary from one geographic region to another.

"The strategy," McNiff said, "is to break the system into smaller pieces through regionalization and ask the laity to take greater ownership of the schools, always in collaboration with the pastor."

Archbishop Dolan said, "This is not the end of parochial schools. Where one parish with one school is strong and vibrant, it will stay," but in suburban and rural areas, where two or three parishes are having trouble maintaining individual schools, the regional model will allow a single strong school to thrive.

"Pathways to Excellence" anticipates that each parish will support a Catholic school, even if it is not located on the parish campus. And while the archdiocese will continue to support schools in areas of critical need, there will be a significant reduction in the total amount of financial subsidies from both parishes and the archdiocese.

The strategic plan lays out 25 objectives and 84 strategies to achieve them in the areas of Catholic identity, leadership, academics, governance, finance, enrollment strategies and communications.

The plan calls for strengthening the Catholic identity of schools by supporting faith formation and religious practice for teachers and parents, because "it is essential that the adults who are entrusted with sharing the faith tradition and guiding the moral development of students are themselves well-formed in the faith."

McNiff said the plan is "predicated on the belief that leadership is key. There is a focus on making sure we get the right adults in the building."

The plan describes tools to identify, cultivate and retain exceptional principals and teachers and promote a professional atmosphere that rewards excellence and supports a cohesive group of educators. It includes recommendations to strengthen recruiting, training, mentorship and evaluation.

Since 2008, the Archdiocese of New York and the Diocese of Brooklyn have operated the Curran Principal Academy, an 18-month fellowship program that prepares classroom teachers to become administrators.

"Pathways to Excellence" acknowledges that the archdiocese can no longer rely on good will and word of mouth to fill its classrooms. The plan recommends an aggressive marketing and recruiting campaign, including an interactive website that has already been launched to attract prospective families, www.buildboldfutures.org.

The archdiocese has joined with the University of Notre Dame in a program to increase the number of Latino children in Catholic schools.

In a letter introducing the strategic plan, Archbishop Dolan said the Catholic schools of the archdiocese have spent more than 200 years promoting lifelong commitment to faith, prayer, virtue, social justice, religious vocation and embracing a way of life based on responsible stewardship.

"We have done a splendid job educating children from many backgrounds, giving them the tools and confidence to succeed. And our schools are here to stay," he said.

Day 2 at the USCCB: Strategic Priorities

Time to put the 'catholic' back into the Catholic Church