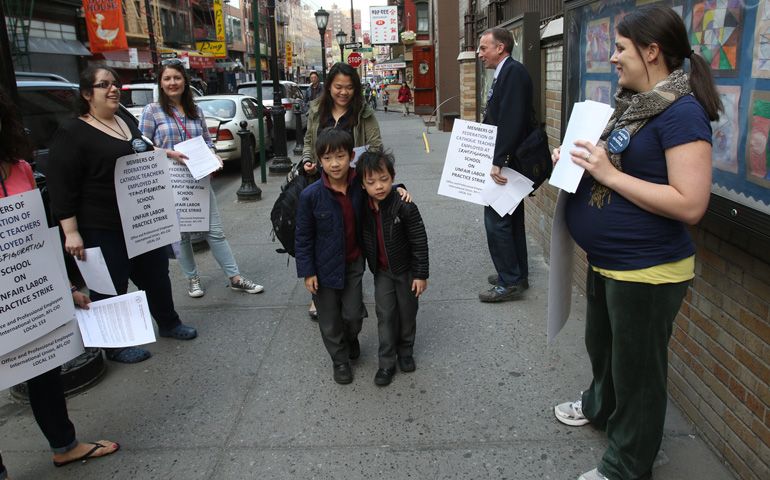 A woman and two students walk past striking teachers May 5 near the entrance of Transfiguration School in the Chinatown section of New York City. (CNS/Gregory A. Shemitz)

Washington — In early May, Catholic school teachers in the New York archdiocese took part in one-day strikes at 16 different schools and are planning to continue to participate in these "rolling strikes" throughout the month, according to the teachers' union.

The Federation of Catholic Teachers, which represents more than 2,600 teachers, said they were striking to protest what the group calls unfair labor practices charges it has raised against the archdiocese's Association of Catholic Schools. The charge is based on a letter to teachers from the archdiocesan school superintendent that said that if teachers accept a salary increase of 1 percent, it could lead to Catholic school closures.

Julia Pignataro, president of the teachers' union, said the letter to Catholic school parents and teachers earlier this year from Timothy McNiff, superintendent of schools, was a direct violation of the bargaining process.

Joseph Zwilling, communications director for the New York archdiocese, told Catholic News Service that archdiocesan attorneys have assured the archdiocese that they have "done nothing improper."

"I'm confident we've acted appropriately and negotiated in good faith trying to have a settlement that's fair for teacher and parents. We're working hard. I hope we will be able to negotiate a settlement," he added.

The Catholic school teachers have been working without a contract since September, and the union representing them has taken part in about 20 negotiating sessions with the New York archdiocese.

When talks began in the fall, the archdiocese initially proposed 1 percent annual raises for three years, and the teachers' union asked for a 6 percent annual wage increase over a three-year period -- the standard contract for the teachers.

There was some back-and-forth negotiation and then, according to Pignataro, the archdiocese started "bargaining in reverse" by downgrading its offer and saying it would give the teachers a two-year contract with no raise or a 1 percent raise with a two-year contract and the likelihood of 10 schools per year closing.

Pignataro, in her first year as president of the Federation of Catholic School Teachers, told CNS the archdiocesan teachers are "angry and hurt" over the negotiation process and feel they are not asking for too much but simply for pay they deserve.

"Really, deep down," she added, the strikes wouldn't be the teachers' first choice, but they wanted to get their message across. They have succeeded on that level since the union has been receiving calls and emails from parents wanting to get involved and to show their support, Pignataro said.

She pointed out that further strikes will be determined in weeks ahead, depending upon how the negotiations proceed. The archdiocesan school year runs through mid-June.

Zwilling said no schools have closed during the strikes. He said the archdiocese has made an offer for teachers with built-in step increases that "we believe to be fair." He also said other issues have been settled and that the only dispute now is over teacher salaries.

"The bottom line in all of this," he said, "is there aren't enough people sending kids to Catholic schools." He said "when schools aren't filled or are half empty or a third empty, it's tough to pay the bills."

He also noted that the archdiocese went through a dramatic and painful planning process in the past four years when it closed 60 schools. Now the archdiocesan schools are in a regional system to "control costs and keep schools sustainable for the long term."

"We simply can't turn to parents and say 'by the way we're raising your tuition'" to pay higher teacher salaries. He said the schools will end up losing more students and the deficit will continue to grow.

Zwilling said the new regionalized system is in its early stages but no Catholic schools closed last June and none is due to close this June.

Pignataro, who was a kindergarten teacher in the now-closed St. Joseph's School in Rosebank, N.Y., said it is very likely Catholic schools will close in the future and it would not be fair to say it happened "because teachers took a raise."

As warden, she oversaw executions; now she fights to stop them