Our brains are wired for liturgy 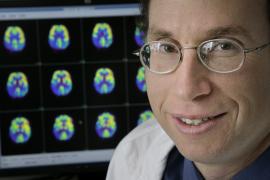 Dr. Andrew Newberg, director of the Center for Spirituality and the Mind at the University of Pennsylvania School of Medicine (AP/Matt Rourke)

With their scientific research into the biology and anthropology of religious behavior, Andrew Newberg and the late Eugene d’Aquili, both physicians at the hospital of the University of Pennsylvania, have shed light on the origins of ritual and liturgy in the human sphere and in particular on the tensions that underlie the “liturgy wars.”

In an interview with NCR, Newberg said: “We have observed how different types of rituals result in slightly different effects. For example, praying to God will give a different result than praying to a saint. Different holy days cause different experiences based on their liturgies. It would be an interesting research study to determine exactly what kind of effect -- and with what strength -- appears to arise from liturgy that is focused on the priest versus one focused on the assembly. Perhaps such an exploration would yield important information about what people experience differently depending on the type of ritual. It would be nice to know whether the different approaches result in similar or different experiences. And if they are different, how are they different?”

Their research on the relationship between the brain and our experiences of prayer, meditation, sacred story and liturgy is a step forward in the study of religion. Previously, religious behavior was thought to be purely cultural. Now we know there are biological correlates for many kinds of religious activities.

Hundreds of thousands of years ago, Neanderthals built altars and conducted funeral ceremonies. This proto-religious behavior shows that as soon as hominid brains got big and complex enough for mind to arise, we began to wonder about the mysteries and problems of existence, and found some resolution in religious story and ritual.

The brain has an inbuilt tendency to turn all thoughts into actions, according to these researchers. Vestigial contacts that exist between the highly advanced frontal lobes and the brain’s motor areas inhibit the brain’s inclination to act out all thoughts, yet this inhibition can be overridden, and often is. By mentally rehearsing actions like running, stalking or fighting, hominids probably honed those abilities and prospered accordingly.

It would be no surprise then if the brain compelled us to act out our religious and sacred stories. “The ideas these stories convey about fate, death, and the nature of the divine and human spirit … would certainly gain the mind’s attention,” Newberg and d’Aquili write in their 1999 book, The Mystical Mind: Probing the Biology of Religious Experience (Fortress Press). Combine the neurological functions and the meaningful context, and we have the source of ritual’s power.

Add to this the reality that ritualized dancing, singing or chanting can drive the brain’s frontal cortex into producing ineffable, pleasurable feelings. In combination with other activities often a part of ritual -- fasting, repetition or call and response, hyperventilation or inhalation of incense -- this multisensory stimulation can affect the body in ways that lead to altered mental states. All this combines to powerfully reinforce the beneficial effects of liturgy and ritual.

Ritual or liturgy, Newberg and d’Aquili write, is performed in order to solve a problem presented to the verbal, analytic part of the mind/brain. The problem may be that of discerning between good and evil, life over death, or the disparity between God and humanity. These are not abstract concerns solely; they are lived out all the time in our lives, and they produce anxiety, unrest and dissatisfaction.

Like all other animals, humans must often cope with environmental stimulation by means of motor behavior. When the situation is ambiguous, the most useful response is some kind of repetitive motor activity, like a bull pawing the ground, a dog barking, or a cat repeatedly licking itself. Such rhythmic stimulation strongly drives the arousal system that allows us to fight or flee when danger presents itself or to focus the mind.

Prayers, chanting and other repetitive behaviors associated with ritual can also stimulate the arousal system. In ritual behavior, the quiescent system is also stimulated, that part of our nervous system that provides us with rest, equanimity and balance.

Ritual behaviors bring about a simultaneous discharge of both the arousal and quiescent systems. The result is not only a feeling of “union with a greater force or power but also an awareness that death is not to be feared and a sense of harmony of the individual with the universe.”

Ritual is the brain’s mechanism for relief of existential anxiety, they summarize. This explains its persistence in the range of important human behaviors that have been with us over hundreds of thousands of years.

Newberg and d’Aquili also point out that if a ritual or liturgy is to maintain meaning from one generation to another, the balance between rhythm and content must constantly be adjusted. By rhythm, they mean that it recurs in the same or nearly the same form with some regularity. As an example, they refer to the Second Vatican Council prescribing the use of the vernacular for Mass. The content of the ritual had been preserved but the change remained controversial; some found the vernacular Mass less satisfying. “Virtually all rituals must maintain this delicate balance, between permanence and impermanence,” they write.

The Mystical Mind presents much of their research on ritual and liturgy. Newberg is a specialist in brain imaging; d’Aquili, who died in 1998, was a lecturer in psychiatry and held a doctorate in the anthropology of religion.

The researchers are not saying brain physiology alone creates ritual and liturgy, only that biology, over the hundreds of thousands of years of our development, has created and shaped the neural pathways to render these aspects of experience useful and effective. The general structure of religion and theology necessarily arise from the functioning of our brains.

This research shows how intimately linked our bodies are with our souls.

Ritual and liturgy are powerful because they allow participants to taste, if only for a moment, the transcendent spiritual unity that all religions promise, Newberg and d’Aquili say. “One can see why so powerful a behavior has persisted through the ages and is likely to persist for some time to come.”

[Rich Heffern is an NCR staff writer. His e-mail address is rheffern@ncronline.org.]

All this week, NCRonline.org focuses on liturgy. Every day a new article and lots of discussion.

Parish | Our brains are wired for liturgy

Study: Almost one in five Americans has no religious affiliation