Parish installs Marian shrine to bring comfort to those with addictions 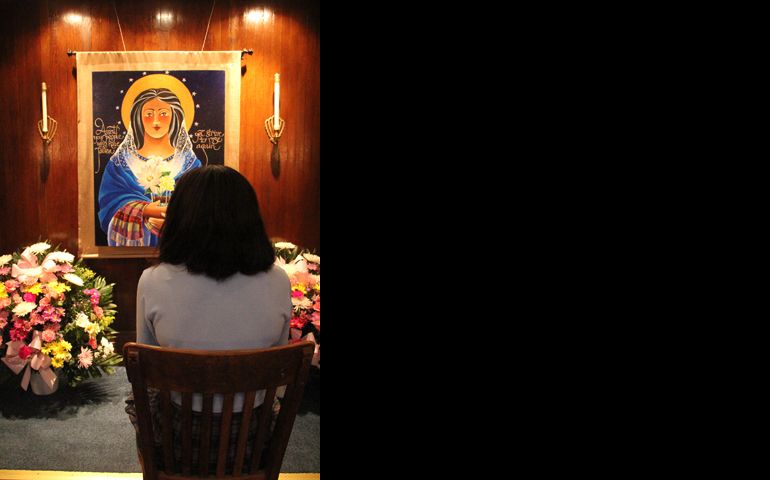 A visitor prays before a shrine to Our Lady of Light, featuring a painting by Oblate Br. Mickey O'Neill McGrath, at Blessed Virgin Mary Church in Darby, Pa. (CNS/CatholicPhilly.com/Sarah Webb)

Darby, Pa. — Just about every Catholic church has at least one and often several images of Mary, and that is certainly the case at Blessed Virgin Mary Church in Darby.

It is an old church, built in 1930, but one shrine to Mary is new. It was installed just last October and is unique among the Philadelphia archdiocese's 235 parishes.

A large icon painted especially for the church, "Our Lady of Light, Help of the Addicted," was executed by celebrated artist Br. Mickey O'Neill McGrath, an Oblate of St. Francis de Sales, who also gave a reflection at the parish.

In the icon, Mary is depicted holding a broken cocktail glass, and growing from it are three flowers: a lotus, symbolizing enlightenment and beauty; a golden rose, symbolizing the rosary, especially the mysteries of light; and a lily, reminding everyone of the hope of Easter and the promise of a new beginning.

Mary's halo is surrounded by 12 stars symbolizing the 12 steps of addiction recovery programs, and in the background there are words from an ancient prayer: "Assist your people who have fallen, yet strive to rise again."

The shrine, which has two chairs in front of it for meditation, was the idea of Fr. Joseph Corley, who has been the church's pastor for the past 15 years. During that time, he has had to preside at the funerals of too many people who died as a result of addiction.

Substance abuse is probably no worse in Darby than in most other parishes -- maybe 8 percent of the deaths over the years, as a ballpark figure.

What really bothers Corley is that most of them are way too young to die -- often between 20 and 45. For some, it's a slow death after alcohol has destroyed their system; for others, the instant death of drug overdose.

In Blessed Virgin Mary Parish, the deaths are about evenly divided between men and women, and usually members of families Corley sees every week. "We try to support the parents," he said.

This isn't a brand-new experience for Corley. "I was a detox counselor at a VA hospital earlier in my career," he told CatholicPhilly.com, Philadelphia's archdiocesan news website.

It's encouraging to him when he sees members of the parish or people from other parishes who attend one of the two Alcoholics Anonymous groups that meet at the Darby church or family members who attend the Al-Anon groups in the parish.

"I've had friends who have moved from addiction to recovery," he said. The new shrine gives hope. "The grace of God can help and I see people who come before the shrine and pray. Some are in recovery and some are parents."

Some of those who enter recovery programs for addictions do not speak about it outside of their 12-step group. Others might find talking about the issue therapeutic and a way to encourage others to join.

Richard Whalen, 37, an active member and lector at Blessed Virgin Mary, is a recovering alcoholic who belongs to the latter group and is quite open about his own struggle. Growing up the son of an alcoholic parent, he swore to himself he would never drink. That changed when he was 21, and he not only drank, but before long, drank constantly.

It didn't stop after he married. Although his wife, Lee Anne, often threatened to leave him because of his alcoholism, he is thankful she stuck by him. "She has been so supportive and has helped me along the way," he said.

Through it all, there was his Catholic faith, which included daily rosary and prayers even though he refused to admit he had a problem.

"I was drinking and driving, emotionally abusive and in a bad mood every day because I was up all night drinking," Whalen said. "I was in a world where I was the only person, it was all about me."

It was back in 2008 that he finally got up the courage to do something about it. He emailed Corley and told him he had a "little" drinking problem.

Corley was more than helpful and convinced him to join an AA group, and he has been a steady member of the Wednesday night group ever since.

Meanwhile, Whalen has the support of his friends and family, along with Corley.

And of course, there is the Shrine to Our Lady of Light, Help of the Addicted. "I love the shrine, I go there often," Whalen said.

[Lou Baldwin writes for CatholicPhilly.com, the news website of the Philadelphia archdiocese.]

Pope cites three lessons from Mary: Be joyful, help others, never give up

Spend time in silence and service before Christmas, pope suggests