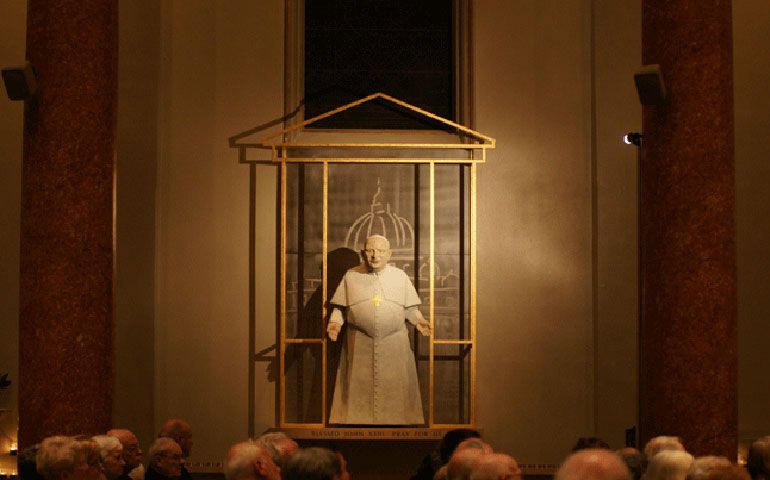 Seattle — St. James Cathedral here dedicated a shrine to Blessed Pope John XXIII the last weekend in September. Installed in the west nave of the church, between the shrine to the Infant of Prague and the regally marble St. Anthony of Padua, the almost life-sized statue was unveiled Sept. 29, the evening before a Sunday Mass commemorating the 50th anniversary of the opening of the Second Vatican Council.

Dedicated to the Italian-born pope of humble origin who once said, “Every believer in this world of ours must be a spark of light, a center of love, a vivifying leaven amidst his fellow men,” the shrine features an open-armed and realistically wide-girthed bronze sculpture that hovers above a rounded pedestal of Jerusalem stone. Designed to exude a spirit of compassion and openness, the statue visibly opens up into the space, serene and inviting.

Those gathered to worship and witness the shrine’s dedication applauded with joyful emotion and tears when Fr. Michael G. Ryan, pastor here since 1988, welcomed his friend and mentor, retired Archbishop Raymond G. Hunthausen, to the cathedral they had once tended together. Hunthausen, 91, had traveled from his home in Helena, Mont., to join in the remembrance of the historic event and to honor the memory of his “hero,” John XXIII. Hunthausen was named bishop only weeks before the opening of the council. He is the only American bishop still living who participated as bishop in all four sessions of the council.

Ryan, in a homily that began with Moses and ended with John XXIII, told parishioners that “Good Pope John was simply doing what the Spirit had always prompted him to do -- espousing a church with an open heart and an open mind -- a church every bit as open as he was: a church renewed from the inside out and from top to bottom, a church where the gifts of all -- women and men, laypeople and clergy, Protestant and Orthodox, poor and rich, simple and educated -- would be welcomed and honored and celebrated.”

The shrine was envisioned about a decade ago. It also serves as an extension of renovations to the cathedral carried out in 1994 that implemented and integrated Vatican II guidelines for the celebration of the liturgy, including moving the high altar to the center of the church. The architect, Stephen Lee, who oversaw that renovation and the development of the new shrine, described this latest work as “elegant, sacred, comfortable … fitted to the rest of the building.”

Created in bronze through the ancient lost-wax process by local artist John Sisko and treated with a polychrome patina that lightened its exterior, the sculpture appears pleasantly approachable to some, shockingly true-to-life to others. Set in front of a gilt-framed sketch of St. Peter’s Basilica, the sculpture’s pose suggests the balcony scene on the moonlit eve of the council, when John addressed a crowd estimated at perhaps half a million.

Even unfinished, the statue inspired visitors. As Sisko first shaped the pope’s figure out of oil-based clay, people browsing the gallery adjacent to his studio would catch a glimpse of the work in progress, and recognize, with surprising frequency, someone they knew. Lingering near, they would engage the sculptor with stories about the pope that he likened to “generous helping hands in the process.”

Sisko also immersed himself in his subject through photographs, film and books. At times, he would bring in his own father as a model, and borrowed Hunthausen’s long, buttoned cassock so that he could study the garment hanging from a similar body type.

Sisko told about an elderly man who approached the statue, stating with emotion: “This is Good Pope John.” The man then explained that he had met the pope as a teenager, while on a trip to Italy with his grandmother; she had been granted audience with the pope, and though he had recently become an atheist, he understood that this wasn’t an opportunity one declined. Desiring to be respectful but also mindful of his conviction, he fretted for days over what to say. Just before their moment of meeting, words came to him. Kneeling, he said, “Holy man, bless me.” The pope then took him by the shoulders, embraced him, and whispered in his ear: “No, holy man, you bless me!”

So connected is John to the Second Vatican Council that his feast day, usually assigned to the day of death, is Oct. 11, the day the council opened. Announcing a “new Pentecost,” he once spoke of throwing open the windows of the church so that “we can see out and the people can see in.” Both quotations appear as inscriptions on the shrine.

At the close of the dedication liturgy, Ryan invited Hunthausen to have the “last word.” The archbishop spoke gently. “You touch my heart,” he began.

He concluded, “It’s my hope that you continue as a faith community, as God’s holy people, to live in the spirit of Good Pope John, to live in the spirit of Vatican II. You have certainly done a wonderful job so far, but there is so much more to bring to our troubled world. So may you be Gospel people, may you live the life of the disciple, asking John to be with you and of course to direct us all to our savior, Jesus Christ.”

[Julie Gunter is a freelance journalist from Seattle.]