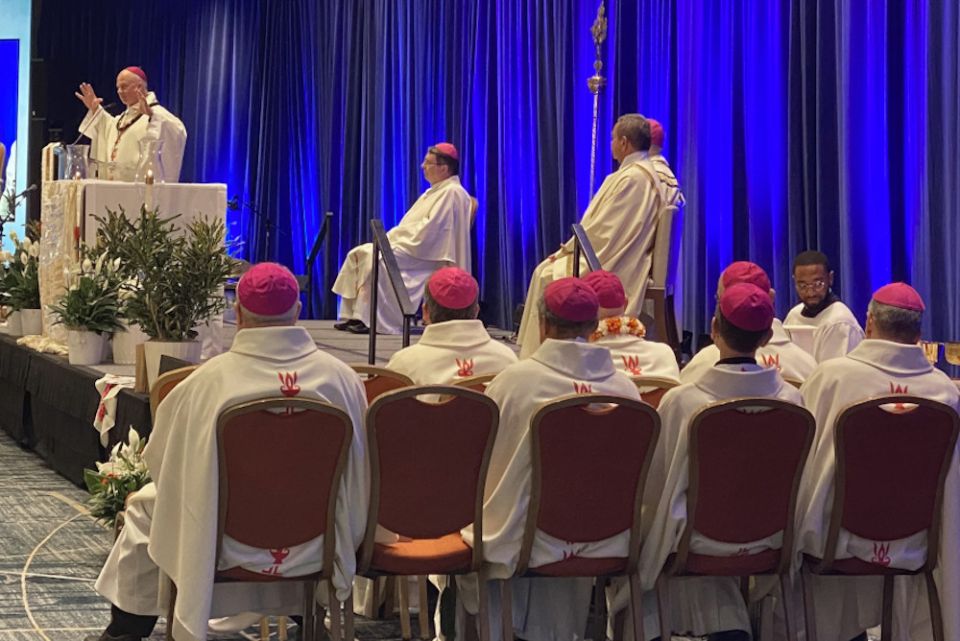 Bishops and priests are seen during the June 23 opening Mass of the "Alive in Christ: Young, Diverse, Prophetic Voices Journeying Together" national multicultural gathering in Chicago. (CNS/Courtesy U.S. Conference of Catholic Bishops)

Finding healing and exploring ways to work more effectively with diverse communities was the focus of the general session on the second day of the "Alive in Christ: Young, Diverse, Prophetic Voices Journeying Together," a multicultural national gathering of Catholic ministry leaders in Chicago June 23-26.

Over 300 Catholic ministry leaders, young adults and bishops from dioceses and parishes around the country listened to the panelists who spoke about the importance of embracing historical memories in their cultures and faith.

Anna Robertson recalled learning about historical memory in a rural town in El Salvador, where young people were committed to preserving the memory of the civil war in that country and the suffering of their communities so that history would not repeat itself.

Upon returning to the United States, Robertson wanted to share the lessons learned.

"I think that part of what fascinated me so much about these stories about these young people, was my own sense of removal from historical memory," said Robertson, who is the Catholic Climate Covenant's director of youth and young adult mobilization.

Over the "Journeying Together" process, she has heard stories of painful exclusion in ministry due to sexism or clericalism; she, too, Robertson said, has felt the sting of exclusion.

"But I believe that turning with courage and curiosity toward historical memory is one way that I can contribute to creating a church where no one is excluded," Robertson added.

Young Hoang, president of the Vietnamese Eucharistic Youth Movement in the U.S., spoke about how Vietnamese refugees clung to their faith as they started a new life in the United States. He recently saw similar efforts among Ukrainian refugees.

"Recently, I had an opportunity to be at the Ukraine and Poland border, and we were able to receive the Ukrainian refugees of war, and I could see many of the families hanging on to pictures of Our Lady of Perpetual Help as a source of faith, something to keep them going," said Hoang, who is from the Archdiocese of Washington.

The growth of the Vietnamese eucharistic movement, which began in 1984 and now has over 140 chapters and over 25,000 members throughout the United States, is an example of that historical memory embraced by Vietnamese Catholics, Hoang added.

The keynote speakers were Precious Blood Fr. David A. Kelly, executive director and founder of the Precious Blood Ministry of Reconciliation, and Nicole Symmonds, an ethics professor at Mercer University in Macon, Georgia.

Kelly has worked for decades with youth and families impacted by violence and the prison system in Chicago. He addressed the importance of healing wounds and building paths by creating encounters and sharing commonalities that help multicultural communities gather in harmony.

"Because we are of Christian tradition, we place our collective stories into the larger story of a Christian story, of the suffering, death and resurrection of Jesus Christ," he said.

"And so, you can enter into those muddled messes, those places of discomfort because you know you are never going alone, but you're going embracing a faith that brings us through the death and the misery and with time, hopefully, the resurrection," the priest added. 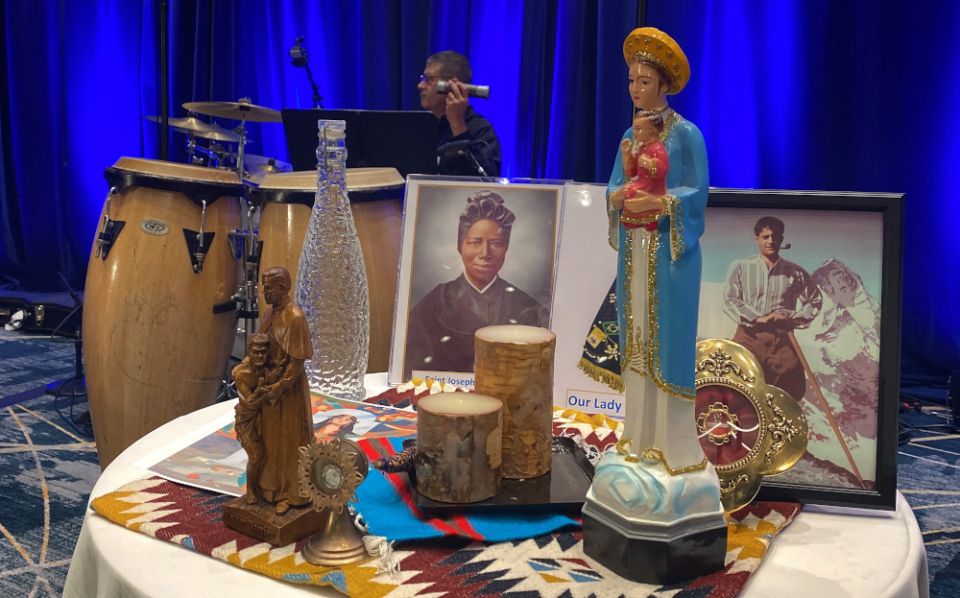 Images in a display at the "Alive in Christ: Young, Diverse, Prophetic Voices Journeying Together" national multicultural gathering in Chicago are seen June 23 the first day of the four-day conference. They include, back left, an image of St. Josephine Bakhita, who was sold into slavery as a child in her native Sudan; in the foreground, a statue of Our Lady of La Vang, a Vietnamese Marian image; and at right a photo of Pier Giorgio Frassati, an avid mountaineer, engineering student and political activist in Turin, Italy. (CNS/Courtesy of U.S. Conference of Catholic Bishops)

Symmonds encouraged participants not to be afraid of encountering discomfort and painful experiences in their dialogues and to embrace the call to bear witness to others' experiences.

"As people of faith, ritually, we're people of history. Every time we come to the table, we talk about 'Do this in memory of me,' so we already have a call," Symmonds added.

The full day of activities included small group sessions for planning and workshops on issues such as supporting culturally diverse families and marriages; nurturing vocations; fostering healing and peace in diverse communities; encouraging leadership; and ministering to young adults.

The four-day gathering was the culmination of a two-year process to form collaborations and pave the way to continue engagement and leadership among young adults and culturally diverse communities in church ministry.

The conclusions of the gathering will be compiled and offered to dioceses, schools, Catholic organizations and apostolic movements for follow-up and implementation, according to the event's website.

Robertson concluded by saying, "I believe that Christ meets us in our story, so let's tell it."

The gathering opened with an afternoon welcoming Mass June 23, followed by a dinner. Presiding at the Mass was Archbishop José Gomez of Los Angeles, U.S. bishops' conference president and Bishop Chad Zielinski of Fairbanks, Alaska, was the homilist.

Speakers at the opening general session held that evening examined how the Catholic Church can advance and encourage "the diversity, giftedness and prophetic voices" of the church's young people from every cultural family.

They also explored "what gifts which we all bring to the one body of Christ" to showcase the diversity of the church.

Hosted by the U.S. Conference of Catholic Bishops, the multicultural national event was led by the Committee on Cultural Diversity in the Church, with the conference's Secretariats of Catholic Education; Clergy, Consecrated Life and Vocations; Evangelization and Catechesis; and Laity, Marriage, Family Life and Youth.

The National Federation for Catholic Youth Ministry also collaborated on the conference.

Donnelly College provides a leg up for those on the margins