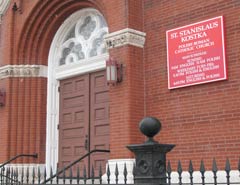 ST. LOUIS -- The fate of a Polish-heritage parish long at odds with the St. Louis archdiocese soon could be decided by a civil judge weighing two-and-a-half weeks of testimony by bishops, canon lawyers and others, and arcane documents dating to the parish’s founding in the late 1800s.

A decision in the years-long dispute, which centers on control of St. Stanislaus Kostka Church in St. Louis, is expected anytime, following a trial in January and the filing of final legal arguments by attorneys Feb. 22. Both sides have indicated they may appeal St. Louis Circuit Court Judge Bryan Hettenbach’s ruling.

St. Stanislaus and the archdiocese have been fighting since 2003, when the lay parish board refused to adopt a model of parish governance that was being instituted archdiocesan-wide in the wake of the clergy abuse crisis.

In the months and years of wrangling since, then-St. Louis Archbishop Raymond Burke removed the parish’s priests, announced St. Stanislaus had broken away from the official Roman Catholic church, and excommunicated board members and a Polish priest they recruited in December 2005 from an adjoining Missouri diocese. Fr. Marek Bozek, who subsequently was laicized, continues to celebrate Polish and English Masses and celebrate the sacraments at St. Stanislaus.

The archdiocese and six former board members filed a lawsuit in 2008, seeking to regain control of St. Stanislaus and restore the parish’s original 1891 bylaws, which gave the archbishop power to appoint the pastor and board of St. Stanislaus’ civil corporation. The archdiocese contends that bylaws passed by the lay board in 2001 and 2004 that strip the archbishop’s authority in making such appointments are invalid and should be stricken.

The archdiocese also contends that in light of Bozek’s status, the parish is not being maintained as a Polish Roman Catholic church as required by its articles of incorporation.

The archdiocese’s attorney, Bernard Huger, said the power struggle could be resolved by reverting to the 1891 bylaws.

Under them, “everybody got along fine for more than 100 years,” he said in an interview. “It worked. They’d be getting along fine now if somebody hadn’t changed them.”

Attorneys for the other side contend that the archbishop at the time, Peter Kenrick, created the parish in cooperation with the laity, and that when Burke declared St. Stanislaus outside the official Roman Catholic church in 2005, that did nothing to undo the civil corporation and its elected lay board, which aren’t bound by canon law.

“Only a bishop can create a parish, which he did in the 1800s,” said attorney George von Stamwitz, representing St. Stanislaus’ civil corporation. “But when [Burke] uncreated it, the civil corporation was still there. Civil law and a civil board created a space for the parish.”

Archbishop Robert Carlson, who succeeded Burke in April 2009, has said the court case is aimed at giving St. Stanislaus parishioners a means to “return to full communion” with the Roman Catholic church, and that he hoped the court’s decision would help “initiate a process of reconciliation and healing.”

For years now, churchgoers at St. Stanislaus have been practicing their faith without being in relationship with the archdiocese, von Stamwitz said. “If we prevail, the situation will continue, and any reconciliation will be done voluntarily as adults,” he said.

The two sides have failed numerous attempts to settle the matter, as recently as a parish vote in August.

Bozek has told the congregation that he will remain with them as long as they want him to stay, but that he would move on if parishioners chose to revert to archdiocesan control. His arrival in 2005 evoked David standing up to Goliath. That year, more than 1,500 curious Catholics from around the United States packed a Christmas Eve Mass that spilled into the parish hall.

As time wore on, his calls for a more progressive, inclusive church that welcomes ordination of women and a married priesthood won new parishioners, but riled others.

The parish rolls, which once consisted solely of Poles or people of Polish ancestry, now include divorced and lapsed Catholics, gay couples, and straight families with kids from the suburbs who say they’ve never felt so welcome. At the same time, some longtime parishioners who object to Bozek have moved on or spend Sunday morning grousing in the parish hall over coffee and donuts.

Bozek said the two sides will never reconcile as long as the main characters in the story are alive.

“We need to die before a sober and cool process of negotiation can begin again,” he said in an interview.

But he added, “What we stand for has to happen,” though it may take a “century or two.”

Polish immigrant Piotr Kornacki, who’s been coming to St. Stanislaus for 20 years, described Bozek as “very intelligent and manipulative” who preaches “his own Gospel.”

Jack Miller, a Protestant, regularly attends St. Stanislaus with a Catholic friend. “I’m a Presbyterian and feel at home here,” he said. “God is here.”

[NCR contributor Cheryl Wittenauer is based in St. Louis.]

Presence of religious among youth helps plant 'seed' for vocations

Catholic health system gets into insurance