Vatican, US bishops mandate changes to 'Lamb of God' 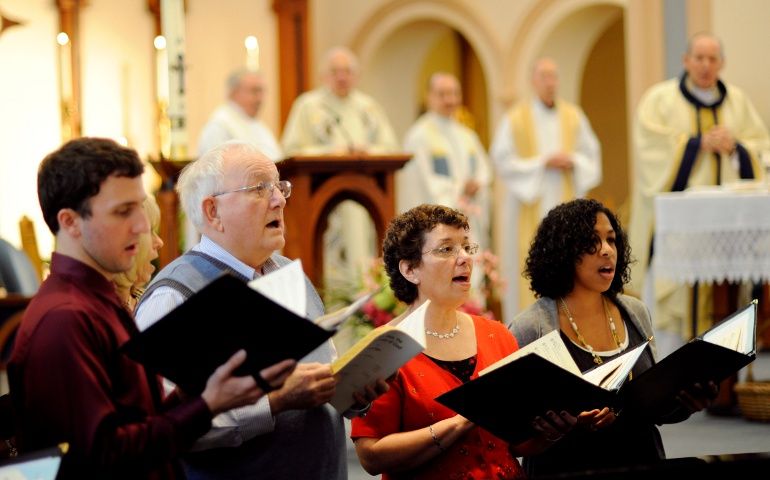 The leaders of the U.S. bishops' conference have requested immediate changes to the music used during the Catholic Mass in parishes across the country to align the texts of the English liturgy more closely to a strict translation of the Latin version.

The changes, announced in the latest edition of a newsletter put out by the bishops' Committee on Divine Worship, ask musicians and the faithful to stop referring to Jesus by any title but "Lamb of God" before they receive Communion.

According to the bishops' newsletter, the U.S. bishops' Administrative Committee, a group of 36 American bishops, approved the changes to the music in September following a request by the Vatican's Congregation for Divine Worship and the Discipline of the Sacraments.

The newsletter states that a document approved by the U.S. bishops in 2007 that granted permission for Catholics to use other titles for Jesus during the musical litany has been "altered to remove any further permission" for the use of those titles, sometimes referred to as tropes.

"This alteration is effective immediately, and affects all existing and future musical settings of the Lamb of God," the newsletter states.

The changes affect the music Catholics use during the last part of the Mass before taking Communion when they sing or chant, "Lamb of God, you who take away the sins of the world, have mercy upon us."

While the Latin version of the Mass specifies that the refrain is to be sung three times before the faithful proceed to receive Communion, congregations in many U.S. parishes have traditionally extended the litany, sometimes including other titles for Jesus such as "Word of God," "Bread of Life" or "Light of Peace."

Calls to the bishops' Secretariat of Divine Worship for comment on the change were not returned Wednesday.

Although several liturgists and liturgical composers contacted by NCR for comment about the change said they were unsurprised that the Vatican has apparently decided the longer versions were no longer necessary, they also expressed some frustration that the change reflected one more sign that the bishops were exerting control over the Mass.

Several also expressed frustration that the Vatican congregation was apparently issuing directives to bishops' conferences on the matter.

One liturgist, Viatorian Fr. Mark Francis, called the changes "another revision to a former way of operating."

"We're into this fundamentalist kind of approach," said Francis, who has previously taught at the Catholic Theological Union in Chicago and served in Rome as his congregation's superior general until July.

The changes to the "Lamb of God," Francis said, are "another example of [the bishops'] trying to maintain the purity of the Roman rite."

"Other than simply being literally faithful to the previous way of doing these things, what does this do for us?" he asked. "How does this help our worship? That question is very rarely asked anymore."

Felician Sr. Judith Kubicki, an associate professor of theology at Fordham University, said she saw the change as "two-pronged," both as a logistical adjustment following the recent changes in the liturgy and as a further signal that the Vatican is concerned about "controlling the text" of the Mass.

"It's another example of a need to completely supervise what the prayer text is," said Kubicki, who also served as president of the North American Academy of Liturgy in 2008. "And if you have these tropes ... they're no longer under supervision."

Descriptions of the change on several blogs have also attracted wide comment, with a posting on the popular liturgical blog "PrayTell" receiving almost 90 comments in recent days.

Several liturgists at the blog and others in comments to NCR mentioned that while they may disagree with the background of the bishops' decision to stick more closely to the Latin text, many of the changes made to the Mass in the recent revision of the English translation made a longer version of the "Lamb of God" no longer necessary.

Fr. Jan Michael Joncas, a Catholic liturgical composer and liturgist, told NCR the changes to the music of the "Lamb of God" are one side of "two kinds of visions for how liturgical reform/renewal/restoration goes forward."

"One is a restrictive form in which you are limited to precisely the texts that are offered in the officially approved Roman missal," said Joncas, an associate professor of Catholic studies and theology at the University of St. Thomas in St. Paul, Minn. "And that's really what has taken place now."

At the same time, Joncas said, the new version of the Mass has also shortened the time required for the consecration of the bread and wine, meaning there is less time for the congregation to sing before taking Communion.

As an example, Joncas pointed to changes in the latest version of the General Instruction of the Roman Missal, issued by the U.S. bishops' conference in 2011, which instructs that the wine for Communion be poured from one carafe into separate glasses before the act of consecration.

Before that instruction, it had been common practice in many parishes to pour the wine into separate glasses following its consecration. Changes like that, Joncas said, shorten the time from the consecration of the Eucharist to when parishioners come up for Communion.

"If the music is supposed to cover the ritual, it's pretty clear that you need less and less music," Joncas said.

According to the bishops' newsletter, the paragraph in the 2007 document that mentions the matter, named "Sing to the Lord: Music in Divine Worship," has now been changed to reflect the change in music before Communion.

Referring to the Latin for "Lamb of God," the newsletter says that paragraph now reads: "The Agnus Dei should not be prolonged unnecessarily nor may other texts be added to this chant."

The previous version of the document stated that "when the Agnus Dei is sung repeatedly as a litany, Christological invocations with other texts may be used."

The newsletter also states that New York Cardinal Timothy Dolan, president of the bishops' conference, received a letter regarding the issue "earlier this year" from Archbishop J. Augustine Di Noia, an American who until June was the second in command at the Vatican's worship congregation.

The letter, the newsletter states, said the practice of using other titles for Jesus was "not in conformity" with the Roman Missal and asked the U.S. bishops' conference to "make this information available to publishers and pastors."

Dolan responded to Di Noia by saying that "the matter would be addressed, in part through a correction to Sing to the Lord," the newsletter states.

While the "Sing to the Lord" document was approved with wide support from the U.S. bishops in 2007, the newsletter states that it was presented "as a set of non-binding guidelines" and did not require Vatican approval.

The bishops' committee's newsletter also states that the entire text of "Sing to the Lord" is undergoing an "editorial review" following the changes in the translation of the English version of the Mass.

That review, the newsletter states, "will result in minor changes to vocabulary, capitalization, and quotes" from the Roman Missal.

For an update on this story, including comments from the director of the U.S. bishops' worship office, see: Bishops' staffer: 'Lamb of God' changes immediate.

A scanned copy of the first two pages of newsletter from the U.S. bishops' Committee on Divine Worship, which contain the notice regarding the "Lamb of God," follows.

Parish | Vatican, US bishops mandate changes to 'Lamb of God'

At Holy Spirit in Las Vegas, desert retreatants found room at the inn

'The life we've been living': Historic Black Catholic Church in Norfolk, Virginia, looks to the future