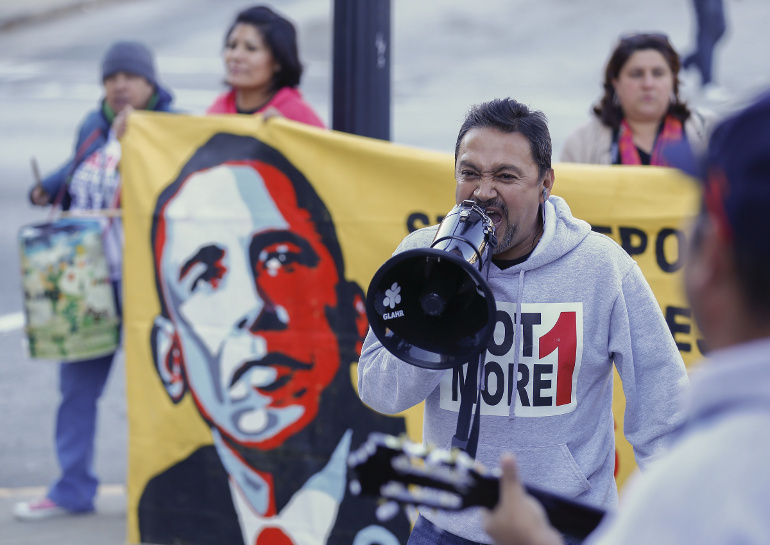 Tomas Martinez shouts into a megaphone during an immigration reform rally at the Atlanta City Detention Center in Atlanta Nov. 21. (CNS/EPA/Erik S. Lesser)

The year 2014 brought potentially significant changes for millions of people who are in the United States illegally and either arrived here as minors or who have U.S. citizen or legal-resident children.

Likewise, a smaller population of kids in Central America may benefit from a safer, legal way to reunite with their parents, in response to a surge in unaccompanied minors and families with children who were making dangerous multi-country crossings to reach the U.S. border.

For more than a decade, there was little progress to report in an annual look back at what had happened on efforts to address the problems with having more than 11 million people in the country who lack legal immigration status.

As 2014 drew to a close, permanent legislative fixes were still elusive, but nearly half of that population might soon be able to "come out of the shadows," as some put it, under enforcement changes announced Nov. 20.

President Barack Obama that day announced steps he is taking administratively to use discretion in who is prosecuted and -- at least temporarily -- protect potentially millions of people from deportation and give them documents allowing them to work legally.

One change will expand the Deferred Action for Childhood Arrivals program, or DACA, by ending an upper age limit and rolling forward the date by which an applicant must have arrived in the United States as a minor.

The bigger change will create a similar program for potentially about 4 million people who lack legal status, but whose children are U.S. citizens or legal residents. It will apply only to people who've been in the country for five years or longer and who pass background checks, register with the government and pay probably hundreds of dollars in fees.

The executive actions also include:

The actions riled Republicans, some of whom threatened to block approval of spending bills or to impeach the president over what they said was an overreach of executive powers. The administration responded by providing a phalanx of legal experts who said the actions were well within prosecutorial discretion and in fact echoed steps taken by previous presidents.

Obama also challenged the Republican-dominated House to take up a comprehensive immigration reform bill passed by the Democratic-controlled Senate nearly a year and a half earlier. Obama's actions might affect about half the people in the country illegally and may be summarily reversed by a future president. But legislation could be broader-reaching and more permanent.

The only substantial immigration-related legislation the House has voted on in the last few years has been to try to stop DACA several times, and to do away with the Diversity Visa Program and use those visas to create more slots for people in the science, technology and engineering fields. The Senate did not take up those bills.

As the congressional term wound to a close, nobody expected the House to take up the Senate's comprehensive reform bill. Nor was there any chance the Senate would take up the Dec. 4 House bill that rebuked Obama.

When the Republicans control both houses of Congress in January, new efforts at changing immigration law will begin again, but there's a broad range of ideas for how to accomplish that, especially in a way that will win the president's signature.

The governors of 17 states Dec. 3 sued Obama in a Texas federal court, charging that the executive actions violate his constitutional obligation to enforce laws, that they put unfair financial burdens on states and that Obama failed to follow procedures for federal rule-making.

Meanwhile, another new administration program allows some families to apply for status permitting their children to come legally to the U.S. without making a dangerous, expensive and illegal trip to cross the U.S. border from Mexico.

That in-country process launched in early December was developed in response to a separate immigration-related crisis revealed this summer. In June, Obama announced that federal agencies and social service providers were scrambling to handle an unprecedented surge of unaccompanied minors and families with young children who were appearing at the border and turning themselves in to Border Patrol agents.

By the end of the fiscal year Oct. 1, more than 68,500 unaccompanied children and more than 68,400 families, primarily from El Salvador, Guatemala and Honduras, had been detained by the Border Patrol. Most had crossed in the Rio Grande Valley of Texas, overwhelming government and private agencies that deal with their legal status as well as provide short- or long-term housing.

Some families were held in immigration detention centers while their legal cases were considered, others were given dates to appear in court and released. Church-run programs around the country quickly mobilized and provided for their needs.

But federal law requires juveniles to be cared for by the Office of Refugee Resettlement, in the Department of Health and Human Services, until they can be placed with relatives or foster families. With so many children arriving within a few months, the agencies were for a time unable to deal with the caseload and some of the children were temporarily housed in warehouse-like conditions, lacking showers, proper beds and activities suited for children.

Congress was unable to pass legislation requested by Obama during the summer to fund the emergency efforts.