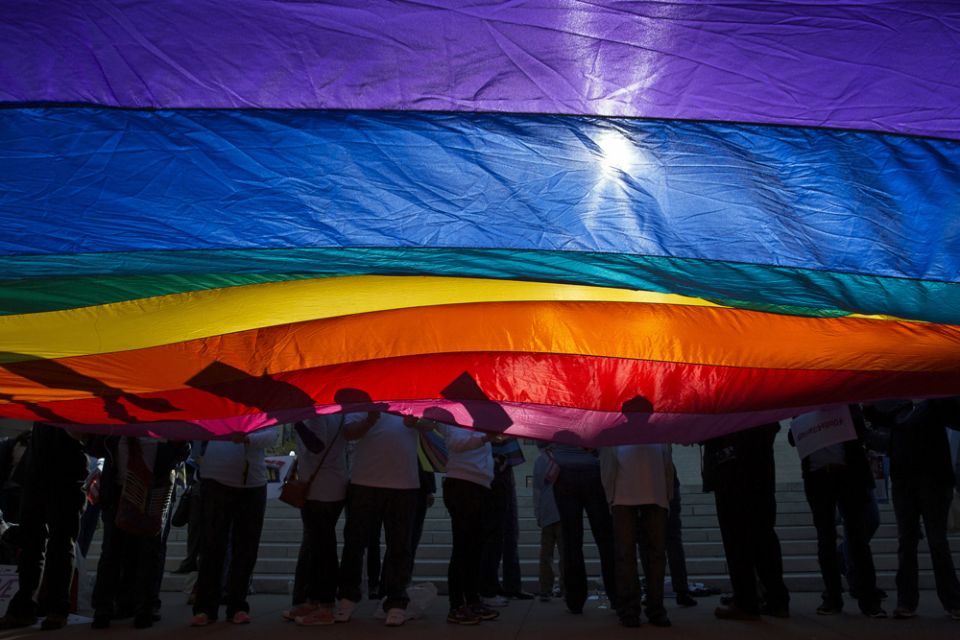 In this 2015 file photo, supporters for same-sex marriage wave a flag outside the U.S. Supreme Court in Washington. (CNS/Tyler Orsburn)

New York — As this city readied for Gay Pride Weekend — this year marking the 50th anniversary of the Stonewall riots that brought LGBTQ rights to public consciousness — Catholics gathered June 26 at Fordham University to explore how their church is facing LGBTQ rights movements around the world.

Catholic activists from Uganda, Mexico and the Philippines described the impact the church has on LGBTQ rights, such as a total roadblock in Uganda, to signs of hope south of the U.S. border.

The event "LGBTQ+ Catholic Activism: A Global Conversation" was co-sponsored by the Fordham Department of Theology and the Church of St. Francis Xavier, a Manhattan Jesuit parish. It was moderated by Jamie Manson, NCR columnist and books editor, and Craig Ford, a postdoctoral theology teaching fellow at Fordham.

Ssenfuka Joanita Warry, executive director of Freedom and Roam Uganda, a group dedicated to fighting for LGBTQ rights, said the situation in her country is dire and the Catholic Church is not helping.

"You don't want your child to know you are gay in Uganda," she said, describing her situation with a lesbian partner, raising three of her partner's children.

Her partner's former husband has spread the word that she is in a lesbian relationship, an act Warry described as threatening in a country where homosexuality is often vehemently opposed. She and her partner have tried to keep their orientation quiet from the three children they are raising.

"It has to be all in the closet. When the child finds out, there is a backlash," she said.

Ugandan bishops and priests regularly encourage discrimination against LGBTQ people, both in homilies and in public statements. But Warry feels it's important for her to keep going to Mass as a witness that one can be a lesbian and have a Catholic spiritual life. She said her goal is to one day be a priest.

Br. Argel Tuason, the chair of the spirituality and faith development committee of the Global Network of Rainbow Catholics, is a Benedictine Oblate of the Monastery Without Walls. He described his life as a quest for Catholic spirituality and community, despite strong opposition from the church and the wider Filipino culture.

As a youth, he sought out the Neocatechumenal Way, a Catholic group with appeal to young spiritual seekers. While with that group, Tuason faced a panel which he said tried to exorcise his homosexuality.

The goal, led by an Argentinian priest, was to "pray away my homosexuality," Tuason said. The ritual included the priest intoning, "Do you believe that the power of Christ can change you?"

After a series of denials, Tuason responded yes, because, he said, "I got tired" of the insistent questioning.

He left that community and said he felt bereft, without a spiritual family. He ran across a book written by Jesuit Fr. John McNeill in a bookstore, flipping through the pages before the store closed because he could not afford the purchase price. McNeil, who died in 2015, was an author and psychotherapist who advocated for LGBTQ rights in the church. Tuason struck up an email friendship with McNeill, who was forced out of the Jesuit community in 1987 for his writings and lectures seen by Vatican superiors as overly favorable to homosexuality.

While difficulties for gay Catholics are front and center in Uganda and the Philippines, there is reason for hope in Mexico, said Carlos Navarro, who helped create the Mexico Network of Rainbow Catholics.

About half of Mexico's 32 states have legalized gay marriage, and Navarro himself is married to Eduardo, his partner of 22 years. "We are moving along and will eventually get to all 32 states," he said.

While the church has opposed same-sex marriage, his group, said Navarro, who once worked in church media in Mexico City, is "using the church's tools," including quoting Scripture, "to let the church know that they are mistaken, they are wrong."

Navarro said he became involved in outreach to LGBTQ Catholics because he wanted to recreate the sense of spiritual community he experienced with a youth group in his hometown of Puebla. The community he founded in Mexico City now has some 60 members, from all walks of life, including gays and straights, who meet twice a month. A pastor invited the group to form a choir for his parish.

"There is no doubt that it is a gay choir," he said. But the Mass itself is for all people.

That sense of inclusion is what Navarro is trying to build in Mexico. He said other LGBTQ Catholic groups have a more confrontational style. But in the long-term, he said, inclusion is what will change attitudes.

"The church is not the enemy," he said. "Heterosexuals are not the enemy." He said the church will change not by papal decree but by the example of LGBTQ people who are openly part of its life.

In Uganda, the Philippines, and Mexico, the growing presence of evangelicals, many financed from the United States, poses a more aggressive threat to LGBTQ rights than the Catholic Church, said the panelists. They have become politically involved, fighting legislation that would outlaw discrimination.

All three panelists said that Pope Francis, whose words of welcome to the LGBTQ community have been highly publicized, could do more in coming out against overt discrimination.

"If only the pope spoke out against discrimination they would listen," said Warry, who noted the strong influence the church has in Uganda, a country where religious leaders are revered.