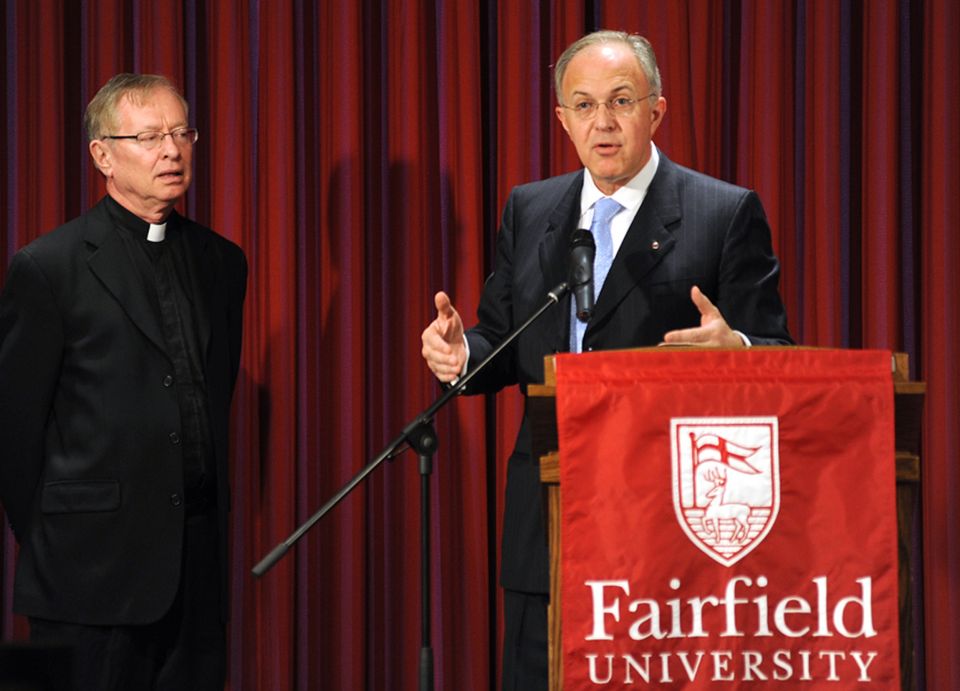 Jesuit Fr. Richard Ryscavage looks on as Supreme Knight Carl Anderson of the Knights of Columbus delivers a speech at Fairfield University in Fairfield, Conn., Jan. 23, 2008. Ryscavage, whose research and work on behalf of refugees and migrants was recognized around the world, died April 26 at age 74. (CNS/Jean Santopatre, courtesy Fairfield University)

Washington — Jesuit Fr. Richard Ryscavage, whose research and advocacy on behalf of refugees and migrants was recognized around the world, died April 26 at age 74.

His career was devoted to serving people on the move globally and at one time he led the U.S. Conference of Catholic Bishops' Office of Migration and Refugee Services, one of the world's largest refugee resettlement agencies.

Ryscavage since 2017 served as an adjunct professor in the Institute for the Study of International Migration within Georgetown University's School of Foreign Service, teaching a course on global child migration.

Former colleagues at the agencies he served recalled his kindness and his willingness to encourage young staffers in their response to the needs of refugees and migrants.

"A number of us who worked with him, particularly the junior people, really benefited by the way he would empower you and he asked you to think through systems and come up with ideas and do things in creative ways," Donald Kerwin, executive director of the Center for Migration Studies in New York City, told Catholic News Service.

"He was an extraordinarily kind, bright, caring and decent person who was committed to refugees and to other vulnerable migrants," Kerwin added.

Wendy Young, president of Kids in Need of Defense in Washington, credited Ryscavage for his deep intellect "combined with this deep sense of compassion" for refugees and immigrants.

"He was a steady presence in the field," Young said. "As a young professional, it was so great to learn from somebody who had been doing it for a while. He had that ability to see the issue from many perspectives, yet to center it in the saving of human lives."

A member of the Jesuits' Maryland province, Ryscavage was the founding director of the Center for Faith and Public Life at Jesuit-run Fairfield University in Connecticut, exploring areas where religion and social and political issues intersect.

During his time at Fairfield, he also was a member of the federal government's Interagency Task Force on Unaccompanied Children, working with representatives of the U.S. departments of State, Homeland Security, Justice and Health and Human Services.

Earlier, he served as national director of the Jesuit Refugee Service/USA. He also organized the first program to provide religious coordinators for immigration detention facilities operated by the Department of Homeland Security.

Ryscavage chaired the humanitarian section of Interaction, the largest coalition of American nongovernmental organizations working internationally through which he collaborated with federal officials, the United Nations and the U.N. High Commissioner for Refugees in Geneva.

Additionally, the Jesuit was the first Arrupe Tutor at the Refugee Studies Center of Oxford University in England. In 2006, he was invited by the Vatican to join the Holy See's official delegation to the 61st session of the U.N. General Assembly and participated in meetings called by the U.N. secretary-general to discuss worldwide migration.

Ryscavage entered the Jesuits in 1967 in Wernersville, Pennsylvania, and was ordained in June 1977. He pronounced final vows at Georgetown University in 1990.

He graduated from Assumption College in Worcester, Massachusetts, with a degree in foreign affairs and earned master's degrees in law and diplomacy from the Fletcher School of Law and Diplomacy at Boston's Tufts University, in political philosophy from Boston College, in divinity from the Weston School of Theology at Boston College and in international administration from the School for International Training in Brattleboro, Vermont.

He is survived by his brothers, Edward, Jr. and Thomas.

A funeral Mass was celebrated April 30 at Georgetown. Burial will be May 1 in the Jesuit Cemetery in Wernersville.