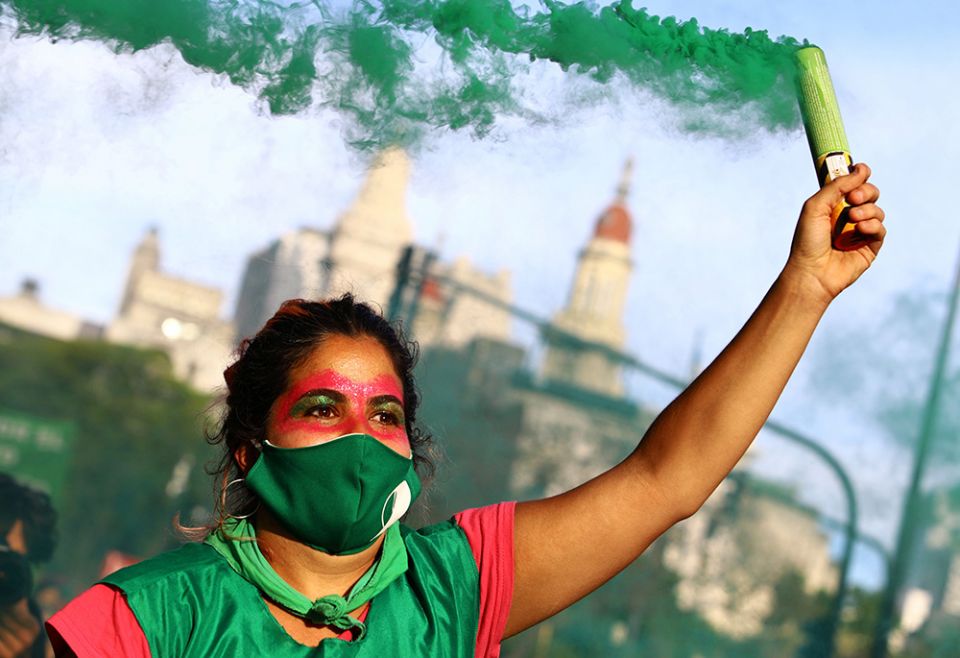 A woman participates in a demonstration Nov. 4, 2020, in Buenos Aires, Argentina, in favor of legalizing abortion. On Jan. 14, 2021, Argentine President Alberto Fernández signed into law a bill that decriminalized abortion during the first 14 weeks of pregnancy. (CNS/Reuters/Matias Baglietto)

Argentina's recent legalization of abortion has been seen as a significant defeat for the influence of the local Catholic Church, coming 10 years after its leaders also failed in their efforts to stop the passage of same-sex marriage.

Worsening the feeling of defeat was the active role that Catholic women played in the campaign to legalize abortion, citing their own personal experiences of dangerous clandestine procedures and a desire to make their own decisions.

Members of the Catholic hierarchy seemed to know they were fighting a lost cause, according to Fortunato Mallimaci, a sociologist at the University of Buenos Aires.

"They only repeated the same kind of reactionary arguments that were presented in the time of the approval of divorce [in 1987] and of same-sex marriage [in 2010]," Mallimaci told NCR. "The church knew that the dispute had already been decided."

President Alberto Fernández signed Argentina's abortion law on Jan. 14, following its passage through both houses of the National Congress in December. The law allows women to undergo elective abortions until the 14th week of pregnancy.

Prior to passage of the new law, women across the country were only allowed to have abortions in case of a dangerous pregnancy or if the pregnancy was the result of rape or assault.

A previous 2018 effort to legalize abortion had been approved in Argentina's lower house, the Chamber of Deputies, but failed in the Senate. More than a million women had gathered in the capital of Buenos Aires at that time, demanding the legalization. Many wore green scarves, which has emerged as a symbol of the pro-choice struggle. 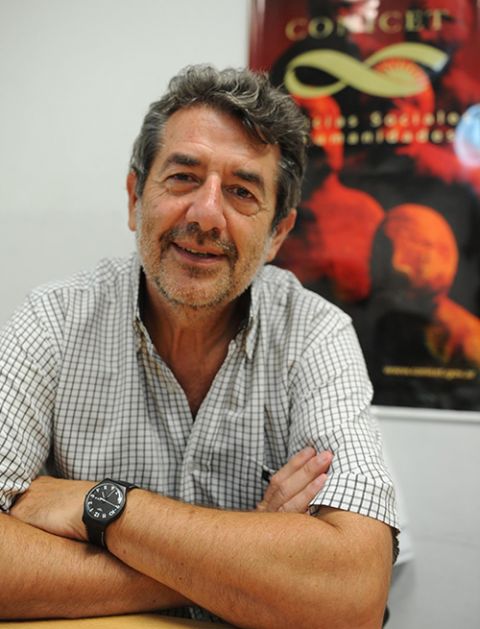 Fortunato Mallimaci, a sociologist at the University of Buenos Aires (Provided photo)

Although the pro-life movement was mostly led by evangelical Protestants and right-wing political groups, the Catholic Church was seen as a major anti-abortion campaigner, given its historical stance on the subject.

"But the Catholics only organized a small march a few days before the decision, along with conservative evangelical pastors," said Mallimaci. "They also called for an anti-abortion fast, but it had an insignificant response."

Mallimaci, who is also a researcher at the National Scientific and Technical Research Council (known as CONICET in Argentina), was one of the authors of a 2020 survey on Argentinians' opinions on abortion legalization.

The study showed that 27.3% of the country's population believed that women should always have the right to abortion when they so decide. Another 51.8% answered that abortion should be allowed under certain circumstances (in case of rape or if the woman's health is endangered, for instance).

Among Catholics, the numbers didn't change much: 22% responded that abortion should be legal for every woman, and 57.7% said it should be legal under certain circumstances.

"Most Catholics have their own set of beliefs," said Mallimaci. "They don't frequent a parish and don't listen to a priest or a bishop."

That's why a considerable part of the women wearing green scarves was Catholic, said Mallimaci. Over past years, he said, leaders of the pro-choice movement learned how to dialogue with women of faith and working-class women.

Maria Teresa Bosio, president of Catholics for the Right to Decide — a movement of pro-choice Catholic women inspired by the U.S. group Catholics for Choice — said divides between the Catholic hierarchy and laypeople have resulted in a more individualistic sense of spirituality over the past 40 years, including among poor, working-class women. 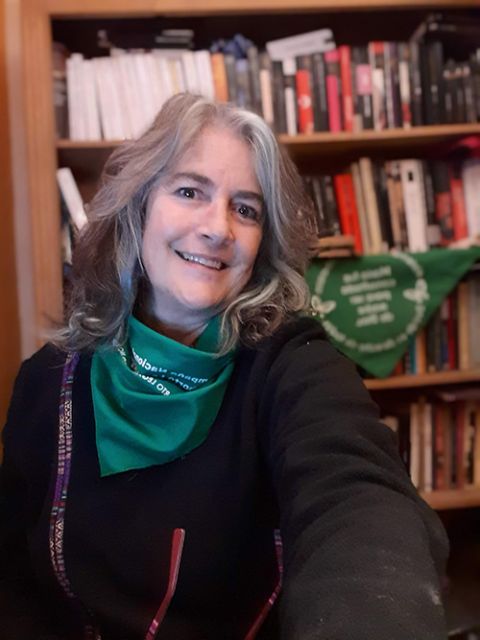 "We've seen in academic studies cases of poor women that pray and request Our Lady's assistance before undergoing an abortion procedure," she told NCR. "This suggests that there's a whole dimension of the popular Catholic spirituality which is unmediated by the official church."

Those ideas have been disputed by the most vocal Catholic voices who took part in the public debate. Fr. José María "Pepe" Di Paola was one of them. One of the country's best-known curas villeros ("slum priests," in Spanish), he argued that working-class people are not worried about abortion.

"In the villas, many people have lost their sources of income during the pandemic," said Di Paola, whose movement of priests living and working in poor neighborhoods was greatly supported by Pope Francis when he was Cardinal Jorge Bergoglio and Buenos Aires' archbishop.

"Poverty has grown 10%," said the priest. "They're expecting the authorities to act in other areas, like housing, health care and the creation of jobs."

Di Paola was one of the guest speakers in the Chamber of Deputies during the December discussion on the abortion bill. There, he argued that the pro-choice campaigners' claim that the legalization of abortion would benefit the poor is false.

"Most poor people oppose abortion," he said. "But the government and the media didn't allow them to express their opinion."

Fernández has said he sent the bill to Congress because of a promise he made to do so during his 2019 electoral campaign. Di Paola called that argument partially invalid.

"He has been saying that he would deal with this subject, but the truth is that, for most people, abortion was not a visible part of his political platform," said the priest.

"Caritas' main goal is to defend the poor," she told NCR. "We made an effort to be the voice of the poor women who we assist every day in this debate."

Imbroglia said the pro-choice campaign reinforced the notion that the lives of those experiencing poverty are "disposable." 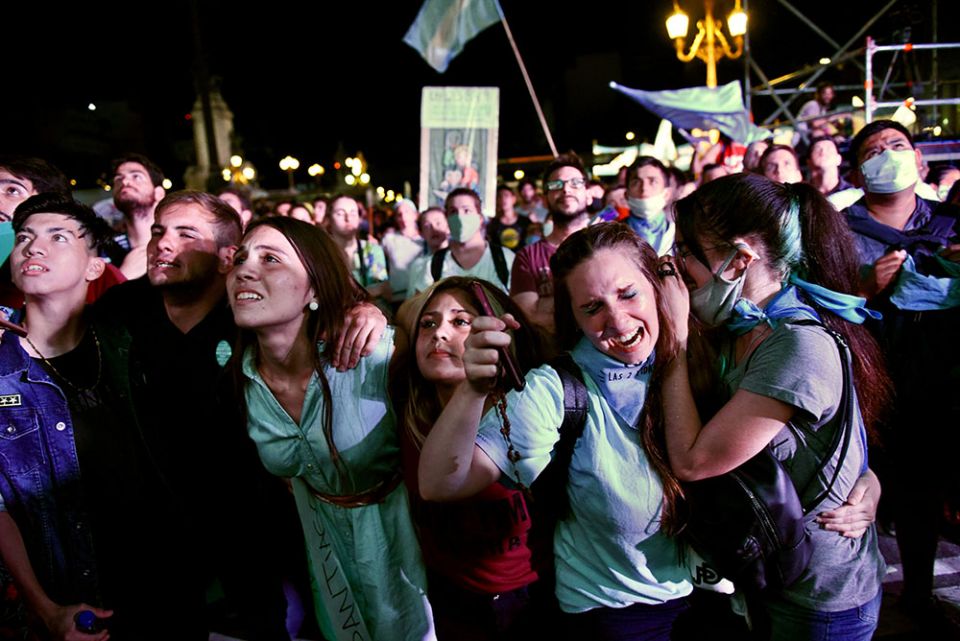 "The law states that any woman whose life is in danger can undergo an abortion and nobody can put it in doubt," she said. "We know that a poor woman's health is more endangered than a rich woman's. So, we consider that this law is discriminatory toward the poor."

Bosio, the pro-choice campaigner, said working-class women don't tell priests and members of Catholic organizations about their histories of abortion. That doesn't mean that they haven't had abortions, or that they don't suffer the consequences of clandestine procedures, she said.

"The Catholics for the Right to Decide and other feminist groups are also present in villas and in faraway provinces," said Bosio. "There, our companions hear many stories of poor women who risked their lives undergoing illegal procedures."

Bosio said representatives of her group had been asked to speak at radio stations all over the country during debate on the abortion bill. Even in very conservative provinces, she said, there were always people who approached them and told their stories of suffering.

"Many women tell us that they had to leave the church because of its patriarchal moral views," said Bosio. "At the same time, they say that we inspired them to feel Catholic again."

That was precisely the case for 30-year-old lawyer Noelia Aisama. In 2010, she got pregnant unexpectedly and was told by the doctors in her home city, San Salvador de Jujuy, that she needed to have an abortion. "I was born with a heart disease and they told me I wouldn't survive a pregnancy," she told NCR.

Aisama said that since she was a child, she has had a special devotion to the Virgin Mary, particularly in moments of anguish. "But I couldn't feel accompanied by the church during that process, because the need to abort the fetus contradicted everything that I had been told in Catholicism," she said.

Aisama went to Buenos Aires with her mother to do additional tests. While at the hospital, she said, a doctor waited until others in the room had left and then approached her.

Aisama remembered: "She asked me if I were a believer and if I were a churchgoer and I told her I was. Then she said: 'If you're a Catholic and know that it's wrong to kill a life, why don't you tell the doctors that you will go on with your pregnancy despite the risks?' "

That talk had a profound psychological impact on Aisama: "I was already feeling confused and guilty, and then I thought that I should be strong and interrupt the medical procedures."

Her mother, also a Catholic churchgoer, gave her all the support that she needed in that process, trying to comfort her. "But she thought that I should prioritize my health," Aisama said.

A few days after that, she ended up having a miscarriage. When she arrived at the hospital, the medical staff received her with suspicion, thinking that she had provoked it. "I felt violated again," she said.

The lack of Catholic support during such a traumatic event made Aisama distance herself from the church for a few years. "I never lost my faith, but it was hard to me to go to Mass again," she said.

In 2015, she met with Catholics for the Right to Decide and opened her heart to them about what had happened to her five years before. "I felt embraced again and felt that I could recover my Catholic identity," she said. "It was a very liberating moment for me."

During the heated debate in December, cases like Aisama's had mostly not been talked about, Bosio said. "Most pro-life groups ... portrayed the pro-choice campaigners as suspicious women who wanted to bring social chaos to Argentina," she said.

Bosio said the goal of her group is altogether different. "We just want to recover Jesus' message that we cannot leave any person alone, including women who undergo an abortion."

Mallimaci, the sociologist, said the Catholic Church in Argentina is currently in crisis. "It's now an institution which is unable to influence society in several areas," he said.

The professor suggested that the church has two opposing paths to consider.

"It may ally with the growing evangelical [conservative] groups or choose the poor," he said. "There are multiple Catholicisms now brewing in the country."

A version of this story appeared in the Feb 5-18, 2021 print issue under the headline: After abortion legalization, Argentine church in limbo .