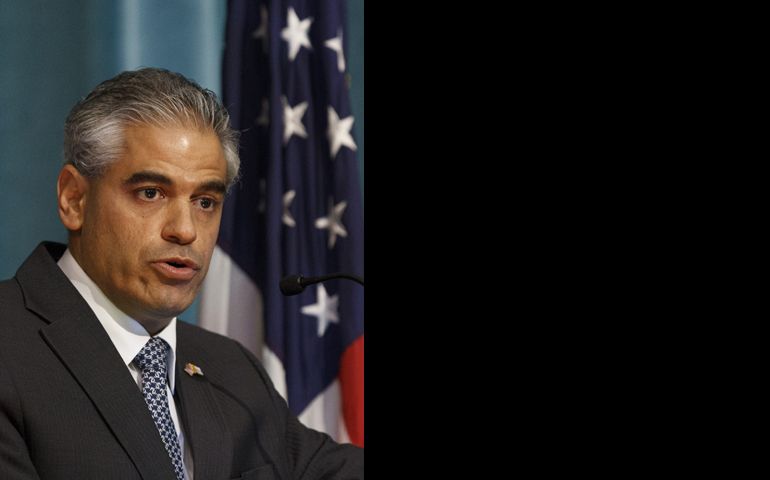 Miguel Diaz, U.S. ambassador to the Vatican, announced Nov. 7 that he will leave his post for a position as professor of faith and culture at the University of Dayton in Ohio. Diaz is pictured speaking on migration during a conference hosted by the U.S. Embassy to the Holy See at the Pontifical North American College in Rome in March. (CNS/Paul Haring)

Rome — Miguel Diaz, preparing to leave his post as U.S. ambassador to the Holy See, acknowledged tensions between the Obama administration and the U.S. Catholic bishops, but said his goal always was to build bridges between the U.S. government and the Vatican.

Meeting a small group of reporters Nov. 8, Diaz said he grew up "on the hyphen" of being a Cuban American proud of both heritages; he said his experience balancing two identities informed how he dealt with the tensions of being an American Catholic and a representative of the U.S. government.

Those tensions became particularly acute in the past year after the Department of Health and Human Services mandated that nearly all health plans, including those offered by most Catholic-sponsored universities and agencies, would be required to cover sterilizations and contraceptives, including some that can cause an abortion.

Diaz, a theologian who has served as ambassador since 2009, paid a farewell visit to Pope Benedict XVI Nov. 5 and was scheduled to leave Rome a few days later, joining his family in Dayton, Ohio, where he was to become professor of faith and culture at the Marianist-run University of Dayton.

Diaz insisted the HHS mandate and the U.S. bishops' strong objections to it as a violation of religious freedom was a "domestic matter" that did not come under his responsibility as a foreign-policy representative.

However, even Pope Benedict XVI voiced concerns about the mandate. He told a group of U.S. bishops in January, "Of particular concern are certain attempts being made to limit that most cherished of American freedoms, the freedom of religion. Many of you have pointed out that concerted efforts have been made to deny the right of conscientious objection on the part of Catholic individuals and institutions with regard to cooperation in intrinsically evil practices."

Diaz said, "Obviously, as a Catholic and an ambassador and a representative of President Obama, I am not ignorant of the tensions that have existed domestically speaking."

"I love my government and I love my church and when there are tensions and disagreements it's not something that I like," he said, so his response was to try to focus on strengthening cooperation in areas where his government and church do agree.

As for his own opinion about Obamacare and particularly the HHS mandate, Diaz has kept that private during his term as ambassador, but that does not mean he won't speak about the issue once he returns to the United States. "Stay tuned," he told Catholic News Service in a private interview Nov. 9.

During his tenure, he told reporters Nov. 8, the embassy worked on areas of common concern, engaging in diplomatic conversations, sponsoring conferences and networking on a range of issues, including preventing mother-to-child transmission of HIV-AIDS, promoting more ethical and just economies, assisting migrants and preventing human trafficking.

In his interview the next morning with CNS, he said, "What inspired me to serve this president and this administration was the 'Yes, we can,'" Obama's 2008 campaign slogan that Diaz said fit with his own vision of Christian anthropology, which emphasizes "we're in this together. The human person is intrinsically relational. ... We stand or fall together."

He said one of the reasons he's so happy to be going to the University of Dayton is its program on the American Catholic experience, which will give him an opportunity to study and discuss further "how to reconcile your patriotism and American identity with your Catholic identity."

After almost three years in Rome with his wife and four children, he said, "Italy has awakened in me a great love for beauty. In the United States we often judge things as being either right or wrong, but here," he said, speaking in Italian, judgments more often are "beautiful or ugly. There's an aesthetic sense to life. ... In order for something to be right, it has to be beautiful," and that applies to conversations and presentations of truth as well as to appearances.