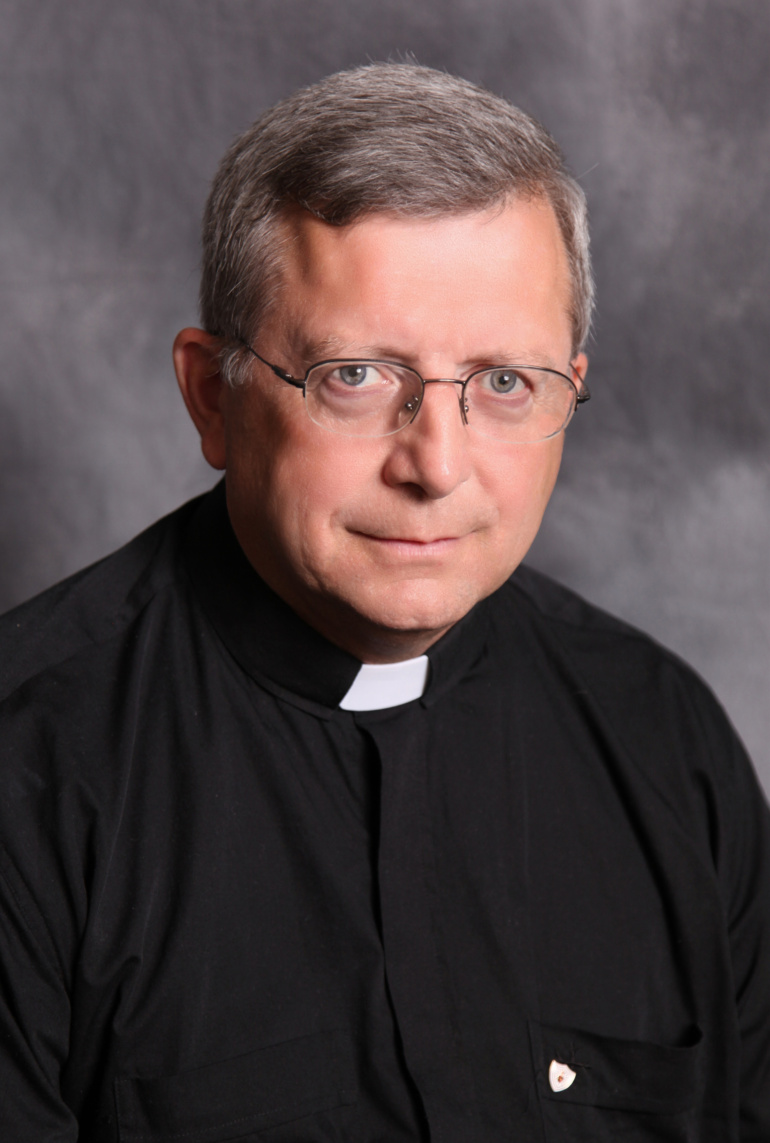 Fr. Patrick Dowling is pictured in an undated photo. Dowling has come forward as the "mystery priest," as he was called by the media, who anointed and prayed with a car accident victim Aug. 4 in central Missouri. (CNS photo/courtesy Diocese of Jefferson City)

The identity of a "mystery" priest who prayed with a young woman at the scene of an accident in central Missouri has been solved.

The diocese of Jefferson City, Mo., has identified the priest as Fr. Patrick Dowling, a native of Kilkenny, Ireland, who is currently serving in prison ministry and in parish ministry to Spanish-speaking Catholics in the diocese.

For days after the accident, which occurred Aug. 4, local and national media described an "angel priest" or a "mystery priest" suddenly appearing at the scene to pray with an accident victim and then just as suddenly vanishing.

An Aug. 12 statement from the diocese noted that Dowling was traveling that Sunday on state Highway 19 between Mass assignments in northern and central Missouri. He stopped at the accident scene near Center, where 19-year-old Katie Lentz of Quincy, Ill., was trapped in her car with serious injuries. The Missouri State Highway Patrol reported that Aaron Smith, 26, of New London, Mo., had crossed the center line and struck Lentz head-on.

The priest discovered late that week that his presence at the accident had become the center of media attention.

He eventually came forward by contacting the Jefferson City diocese and posting an online comment to a story about the accident at the National Catholic Register's website (the comment has since been removed):

"I had Mass in Ewing, Mo., as the regular priest was sick. As I was returning, I arrived at the scene. The authorities were redirecting traffic. I waited till it was possible to drive up closer. I parked behind a large vehicle about 150 yards from the scene. I asked the sheriff's permission and approached the scene of the accident. I absolved and anointed Katie, and, at her request, prayed that her leg would not hurt. Then I stepped aside to where some rescue personnel and the pilot were waiting, and prayed the rosary silently. I left when the helicopter was about to take off, and before I got to my car it was on its way to Quincy.

"I was amazed at the calmness of the two Highway Patrol men. The sergeant was completely in control, amazingly calm. Everybody worked as harmoniously as a Swiss watch despite the critical nature of the scene. I gave my name to one of the authorities, perhaps to the sergeant of Highway Patrol, explaining that I was returning having celebrated Mass at Ewing. It was the sergeant who, at the sheriff's request, gave me Katie's name as I was leaving, so I could visit her in hospital -- I assumed she would be taken to Columbia."

He added: "I think there may have been angels there too and, in this context, I congratulate the fire team from New London and Hannibal, the sheriff/deputies of Ralls County, the Highway Patrol personnel, the helicopter team, the nurses and all who worked so professionally. God has blessed your work. I hope the credit goes where it is due."

Dowling was ordained a priest of the Jefferson City diocese in 1982. He has served at parishes in Moberly, Monroe City, Indian Creek, Milan, Unionville and Eldon, Mo., and in the diocese's mission parishes in Marcona and Nasca, Peru.

Dowling told the Catholic Missourian, the diocese’s newspaper, that he has since visited Lentz and her family in the hospital. Speaking about his ability as a priest to anoint those who are sick, he said he, too, has received the sacrament before, and he described it as restoring "hope."

"You can very easily fall into despair when you're in trouble," he said. "And it restores hope."