Beauty and beer: Monks' outreach is part of new evangelization 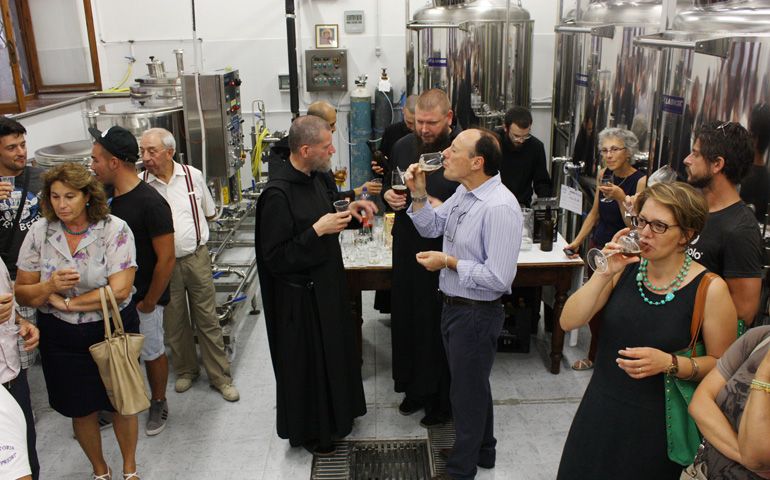 Benedictine monks mingle with guests during a tasting Aug. 14 in the brew room of St. Benedict's Monastery in Norcia, Italy. (CNS/Henry Daggett)

Vatican City — Even before retired Pope Benedict XVI set up a pontifical council for new evangelization and convoked a world Synod of Bishops on the theme, a new group of Benedictine monks was using Latin and liturgy to reach out to those whose faith was weak or nonexistent.

Now they've added beer to the blend, and people are flocking to the monastery in Norcia, the birthplace of St. Benedict, about 70 miles northeast of Rome in the Umbrian countryside.

But for the 18 members of St. Benedict's monastery, life is still about prayer.

"If the prayer doesn't come first, the beer is going to suffer," said Fr. Benedict Nivakoff, director of the Birra Nursia brewery and subprior of the monastery.

The monks in Norcia initially were known for their liturgical ministry, particularly sharing their chanted prayers in Latin online with people around the world.

But following the Rule of St. Benedict means both prayer and manual labor, with a strong emphasis on the monks earning their own keep.

After just a year of brewing and selling their beer in the monastery gift shop and through restaurants in Norcia, financial self-sufficiency seems within reach, and the monks are talking expansion.

"We didn't expect it to be so enormously successful," said Fr. Cassian Folsom, the U.S. Benedictine who founded the community in 1998 and serves as its prior. "There's been a huge response, and our production can't keep up with the demand and the demand continues to grow."

But even with the talk of expanding the brewery, and perhaps exporting some of the brew to the United States, the Mass and the liturgical hours are still the centerpiece of the monks' lives.

"Our life is very much unified by the liturgy, which forms a kind of skeleton around which everything else takes shape," Folsom said.

Many visitors tread a path between the church and the gift shop and, increasingly, from the crates of beer to the church.

Nivakoff said the monks began brewing Aug. 15, 2012, with three goals: contributing to the monastery's self-sufficiency; solidifying bonds with the town; and reaching out to people who are "turned off by religion."

For those who wouldn't think of going to Mass, he said, the monastery gift shop gives them a contact with the monks "in a setting and over a product they feel comfortable with. There's a spiritual gain for them, even though they aren't looking for it."

In many circumstances, Nivakoff said, "we have to preach the Gospel without preaching the Gospel -- just through the example of Christian charity and being kind to people."

The monks' Mass, often celebrated using the extraordinary or pre-Vatican II rite, and their beer may appeal to different people, but Nivakoff said the beauty in both can open people to God.

After years of study and research, including Folsom's visits to Trappist breweries in Belgium to see how the monks ensure their business does not disrupt their prayer and community life, the monks in Norcia decided to make two Belgian-style beers -- a "blond" and a dark, which has an alcohol content of 10 percent.

The dark's alcohol content is much higher than U.S. beers, but is similar to the "tripel" Belgian Trappist beers. It also goes well with the food of Norcia -- famous for pork sausage and wild boar -- and traditional Italian drinking habits in which wine or beer accompanies a meal, Nivakoff said.

Celebrating their one-year anniversary Aug. 14 with an open house and beer tasting, the monks imbibed along with their visitors -- something that does not happen every day, or even every feast day.

"It's too valuable to drink ourselves," Nivakoff said. However, when mistakes are made in the brewing or bottling, some of the foamy liquid makes it to the refectory table and "no one's upset."

Making sure the mistakes are kept to a minimum is the responsibility of Br. Francis Davoren, a native of Dallas who is the brewmaster or "head brewmonk." He had some experience helping a home-brewing friend before joining the monastery, but is still learning even after studying at breweries in Belgium and having a Belgian brewer travel to Norcia to teach.

"The biggest challenge for me has been going from learning theory to actually putting that into practice," he said. "Because beer is a natural product -- it has live yeast in it -- it can tend to have a mind of its own.

"Beer is something that often can break down barriers," he said. "The beer is a catalyst" for bringing people together and giving them something to talk about, but the conversations at the monastery often do not end with the beer.

Fr. Basil Nixen, the novice master, said the beer enterprise has raised the morale of the monks and reinforces their sense of community because all the monks are called on to help with some aspect of producing, bottling, distributing and selling the beer.

"Here in Norcia, we're at a very important place for evangelization" because so many tourists and pilgrims come through the town, he said. "We're continually sharing with others our life, above all the liturgy.

"People come to the monastery for the beer," he said, but they leave realizing God brought them to Norcia to meet him.

Making beer "perhaps dissipates any fear that we might be judgmental or overly critical of them," he said. People assume beer-making monks will accept them.

Br. Anthony Zemenick, a native of Arlington, Texas, who has been at the monastery for seven years, said the beer "is really good stuff."

"I'm not the world's most experienced beer connoisseur, but I've tried several different types and I'd say ours is the best ... not just because it's ours, but because of the flavor, too," he said.

'Who built your robot?' All-girls high school goes all in on STEM