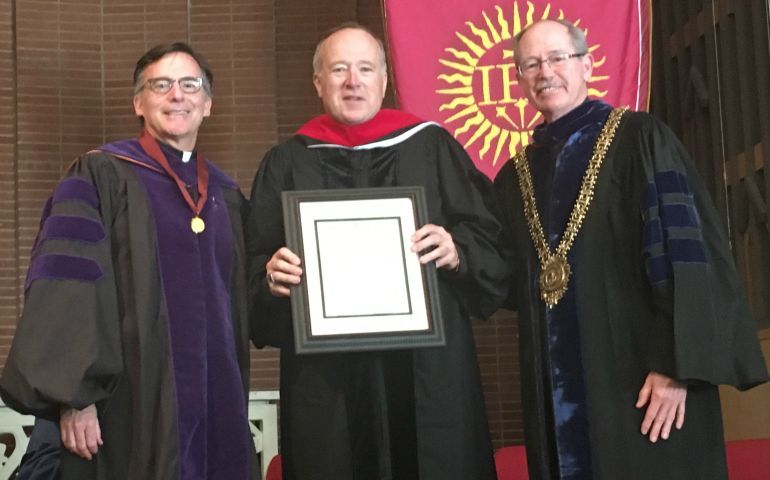 Berkeley, Calif. — Pope Francis teaches us that theology must "attend to the concrete reality of human life and human suffering," San Diego Bishop Robert McElroy told theology graduates at a commencement speech May 20.

McElroy addressed the 55 graduates earning master's, doctorate and licentiate degrees from the Jesuit School of Theology of Santa Clara University. The school is a member of the Graduate Theological Union on Berkeley, California's "Holy Hill."

At the ceremony, the school awarded McElroy an honorary doctor of divinity degree, although he already has a degree from the Jesuit school: a 1985 licentiate in sacred theology.

"When I graduated from here, the bishops of the United States had just finished a pastoral letter on war and peace," he said, noting that each generation faces its own set of challenges. "Thirty years from now, there will be new moments of opportunity and crises that you must face."

McElroy has written and spoken frequently about economic and social inequality, and has advocated a stronger social justice role for the church. Earlier this year he condemned anti-Muslim prejudice in the United States.

McElroy was ordained an auxiliary bishop for San Francisco, his home diocese in 2010. He was named bishop of San Diego in 2015.

Jesuit Fr. Kevin O'Brien, dean of the school, introduced McElroy as "a model of scholarship and ministry for our students."

"With a profound intellect and a pastor's heart, you embody in many ways how Pope Francis calls us to live our faith thoughtfully and compassionately amid the complex realities of human life," O'Brien said. "Your advocacy for migrants, undocumented persons and the working poor has been vital to our national dialog in a time of great change."

In his address, McElroy noted that pastoral theology, a study of the biblical view of the pastor's role, has only recently been considered a distinct branch of theology, though "there were splendid pastoral teachings in the Catholic theological tradition in every age."

Pope Francis, he said, "points to an understanding of pastoral theology which is far more robust."

"It demands that moral theology proceed from the actual pastoral action of Jesus Christ, which does not first demand a change of life, but begins with an embrace of divine love, proceeds to the action of healing and only then requires a conversion of action in responsible conscience."

Noting that people are confronted with "overwhelming life challenges" that prevent them from following the Gospel, he added, "The pastoral theology of Pope Francis rejects a notion of law which can be blind to the uniqueness of concrete human situations, human suffering and human limitation."

McElroy encouraged the school's faculty to focus on the pope's pastoral theology and to place it "at the very center and life of this institution."

"It will be one of the greatest theological projects of our age to understand how this new theological tradition should be formed — how it can bring unity, energy and insight into the intersection of Catholic faith and the modern world."

Pope: Stop throwaway culture now before another generation is lost