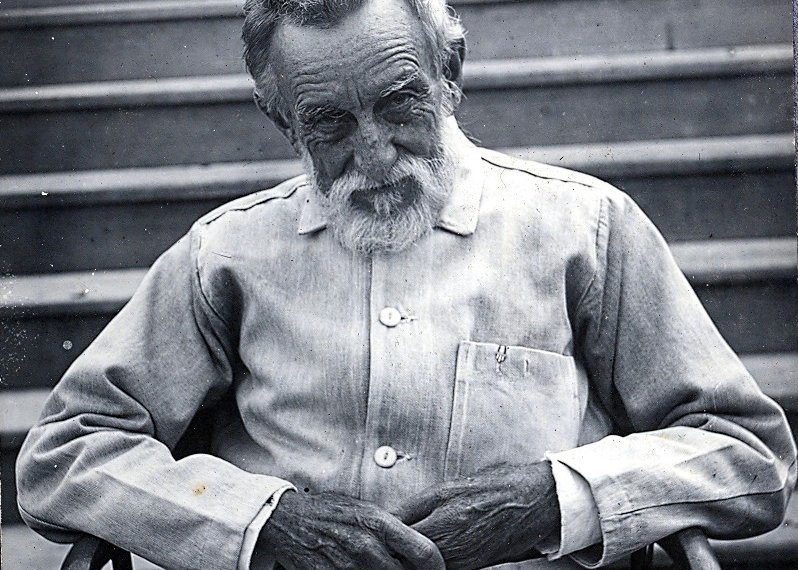 Joseph Dutton, a sainthood candidate with the title of "Servant of God," is seen in this undated photo. He was a Civil War veteran who served in the leprosy settlement of Kalaupapa, Hawaii, from 1886 to 1931, in atonement, he said, for his turbulent post-war years. He assisted both St. Damien de Veuster and St. Marianne Cope, primarily as "dresser of sores." (CNS photo/courtesy Hawaii Catholic Herald)

The U.S. bishops agreed Nov. 17 that the sainthood causes for three laypeople from the United States should be advanced by their respective dioceses.

Bishop Larry Silva of Honolulu presented the third cause, that of Joseph Dutton.

The 2007 Vatican document "Sanctorum Mater" requires the diocesan bishop promoting a sainthood cause to consult with the body of bishops on the advisability of pursuing the cause.

The bishops affirmed advancement of all three causes via voice votes with no audible dissent on the second of two days of public sessions during their Nov. 15-18 fall general meeting in Baltimore.

All three sainthood candidates have the title "Servant of God," given to them when their causes were officially opened. 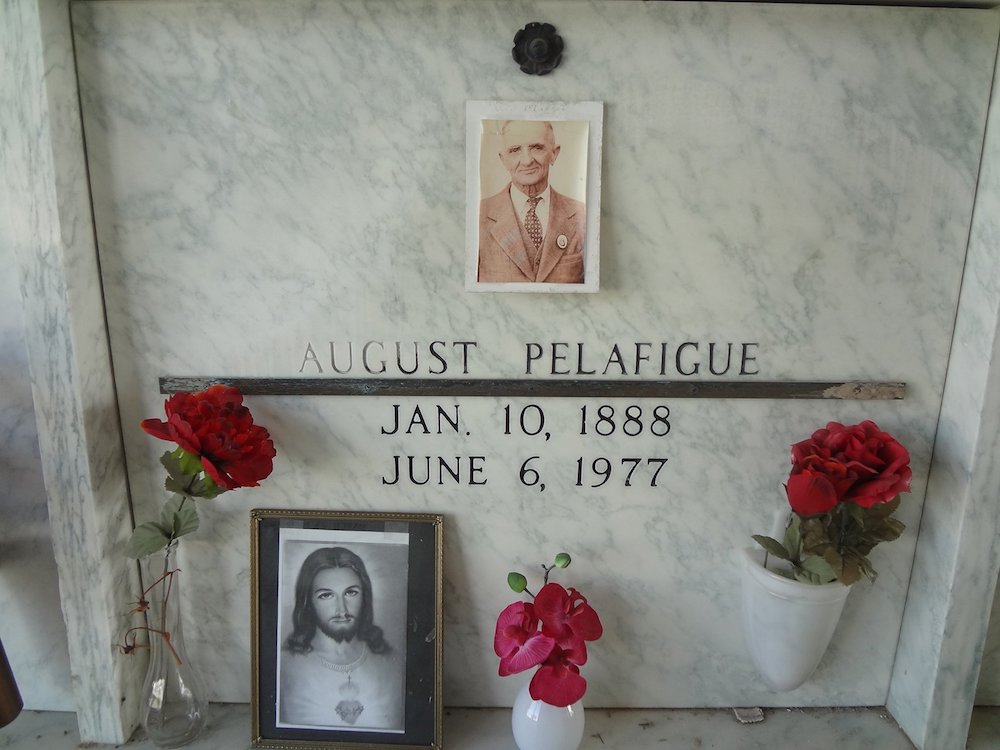 The gravesite of Auguste Robert "Nonco" Pelafigue is seen in this undated photo. Pelafigue, a sainthood candidate who has the title "Servant of God," is known for his decades of ministry in the League of Sacred Heart, Apostleship of Prayer, which is now called the Pope's Worldwide Prayer Network. (CNS photo/courtesy Diocese of Lafayette)

"On Saturdays he taught religion to public school children, and during the summer, Christmas and Lent, he introduced children and adults of the area to the stage by inviting them to perform in Sacred Heart programs and plays he personally wrote and directed for the children," according to a biography of Pelafigue submitted by the Lafayette Diocese. 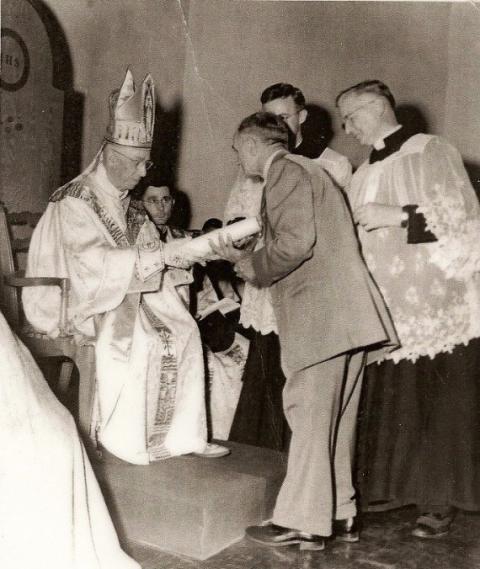 Pelafigue organized a League of the Sacred Heart with about 1,200 members, traveling on foot to spread the word. Offered rides "even in the poorest of weather conditions, he always declined, saying it was his way of doing penance for conversions and for the poor souls in purgatory," the biography said.

"As he grew up, he was given the nickname 'Nonco,' derivative of the French oncle — uncle. He was everybody's uncle," said Deshotel in addressing the bishops Nov. 17.

His house, the biography said, was basically a shed. Pelafigue only reluctantly accepted "the most rudimentary forms of electricity and plumbing; the house had only one lightbulb."

Pelafigue's ministry spanned 68 years, and ended only with his death June 6, 1977, the feast of the Sacred Heart. A foundation in his name was established in 2012 to carry on his work and explore the possibility of beatification and canonization.

Charlene Richard was described as a "laywoman," but she was just 12 and a half years old when she died in 1959 from acute lymphatic leukemia.

Charlene was described as "a normal little girl" who liked sports and went to church — until four months before her death, when she read a book about St. Therese of Lisieux. She asked her grandmother if "she, too, could become a saint by praying like Therese," according to a diocesan biography of the girl. 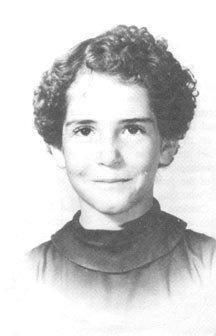 A childhood image of Charlene Richard, who is known as "the little Cajun saint." (CNS photo/courtesy Diocese of Lafayette)

The last two weeks of her life — the only time she spent outside her rural town — "were gifts of grace," Deshotel told his fellow bishops. "Priests who attended to her spiritual needs were asked by her who she could suffer for on that day."

The biography said when the hospital chaplain, a newly ordained priest, was sent to tell her of her prognosis, Charlene replied, "Father, when the Blessed Mother comes, I'll tell her you said hello."

Franciscan Sr. Theresita Crowley, who witnessed Charlene's acceptance of her suffering, would later say, "I can't forget her. I feel her presence. I feel her smile," adding that she prayed to Charlene daily.

The religious sister's devotion spread to others in the area, where people prayed to "the Little Cajun Saint," asking for her intercession in situations ranging from marital problems to finding jobs to seeking good weather for their crops.

One story is told of another girl with cancer who kept asking for Charlene, even though she had never been told of her existence. When someone supplied her with a prayer card bearing Charlene's picture, the girl said, "Charlene," and her cancer went into remission. Although the case was never submitted as a potential miracle, many people in the area considered it one. 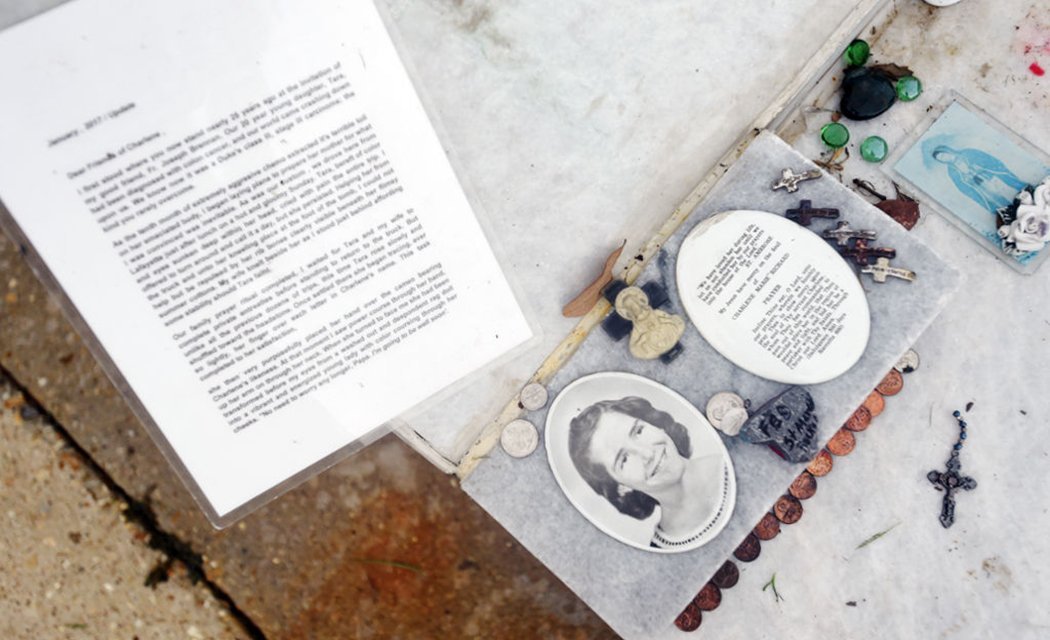 The gravesite of Charlene Richard, a sainthood candidate who has the title "Servant of God," is seen in this undated photo. The young Cajun girl from the Diocese of Lafayette, Louisiana, who died of leukemia in 1959 at age 12, is regarded as a saint by many in south Louisiana and beyond, who say her intercession has resulted in miracles in their lives. (CNS photo/courtesy Diocese of Lafayette)

By 1989, the biography said, hundreds of people were visiting Charlene's grave each week. The cemetery installed a light so visitors could more easily identify the gravesite, and added a box so they could leave written requests.

"Her gravesite is visited by busloads of people," Deshotel said. Charlene is considered "near and far as an example of redemptive suffering ... this innocent child who has proven to be an inspiration to all of us as we carry the cross of illness," he said.

Joseph Dutton was born in Vermont in 1843, moved with his family to Wisconsin in 1847 and later served in the Civil War.

Silva, in addressing the bishops, said Dutton might have suffered from what is now known as post-traumatic stress disorder.

"He married in Ohio in 1866, but separated a year later as his wife was 'unfaithful and extravagant,'" according to a Honolulu diocesan biography of Dutton. A divorce was granted in 1881. Sutton then embarked on what he called "a degenerate decade" of which he spoke little afterward.

He joined the Catholic Church in Memphis, Tennessee, in 1883, and learned about the work of Father Damien De Veuster — now St. Damien of Molokai — and his ministry to what Silva called "the pandemic of leprosy on Hawaii's islands."

Dutton made passage to Hawaii and joined the future saint, who himself had recently been diagnosed with leprosy, which today is called Hansen's disease.

"The courage of my dear brother Joseph Ira B. Dutton appears to respond very well to the special calling for which our Blessed Lord has chosen him. He takes a special interest in all what concerns the altars and sacristies of our churches," St. Damien wrote. "He also acts as our druggist, and he's truly a good confrere to me."

In 1892, Dutton, at the request of Mother Marianne Cope — now St. Marianne of Molokai — was received as a Third Order Franciscan. In 1895, he took charge of the Baldwin Home for Boys, with a capacity of 120 and meant for troubled and abused boys, holding that post until he reached age 87 in 1930. Dutton died the following year.

"In this year of St. Joseph, we propose [sainthood for] this other Joseph, who was the foster father of hundreds of young men at that time," Silva said. "He has many devotees throughout the world. Several books have been written about him. People from New York, from Baltimore, from Hawaii, from Indiana have suggested that we propose his cause of canonization.

"The importance of this cause for the local and universal church is very timely in light of the situation of the present day," Silva wrote to his fellow bishops.

"The poor and disadvantaged are often the objects of a 'throwaway' culture abandoned to their limited or practically nonexistent resources," he added. But Dutton, along with the two saints, "is a brilliant testimony of the presence and activity of Catholic Church for the downtrodden and abandoned."

About 60 sainthood causes of Americans are now working their way through the process toward canonization, according to Archbishop Jerome E. Listecki of Milwaukee, chairman of the bishops' Committee on Canonical Affairs and Church Governance.

In general, two miracles need to be accepted by the church as having occurred through the intercession of the prospective saint — one for beatification and one for canonization.

Auxiliary Bishop John P. Dolan of San Diego urged his fellow bishops that during November, which is Black Catholic History Month, that they "beg our heavenly Father" to further the sainthood causes of six Black Catholic Americans: Sister Thea Bowman, Mother Mary Lange and Julia Greeley, who have the title "Servant of God"; and Mother Henriette Delille, Fr. Augustus Tolton and Pierre Toussaint, all of whom have the title "Venerable."