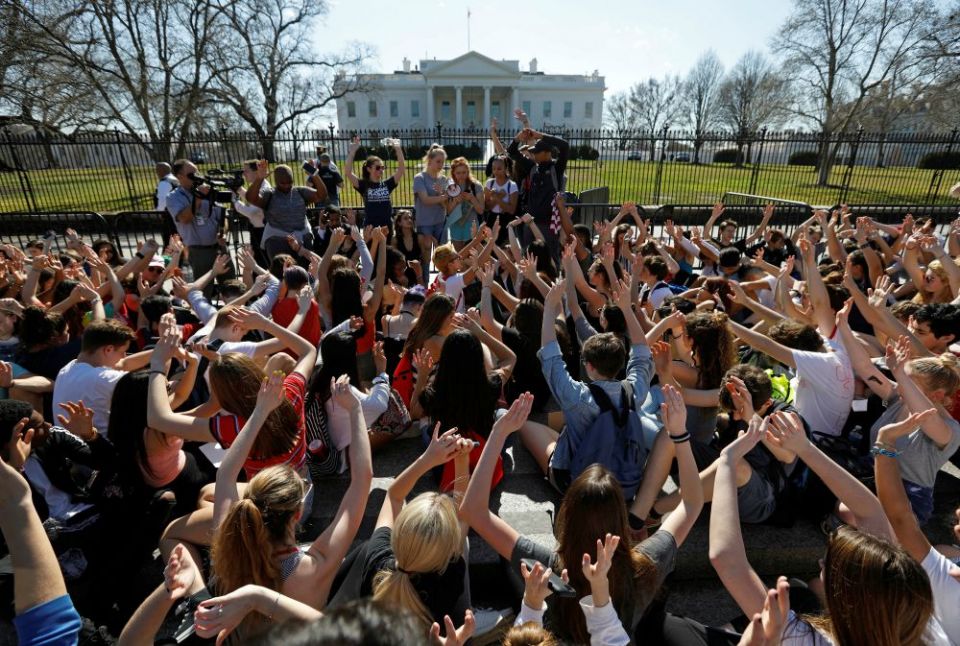 Students who walked out of classes from Montgomery County Public Schools in Maryland protest against gun violence in front of the White House Feb. 21 in Washington. (CNS/ Reuters/Kevin Lamarque)

U.S. — As high school students throughout the country demonstrate for stricter gun control legislation after a series of deadly shootings, colleges and universities are promising not to hold disciplinary measures resulting from non-violent activities against them in the admissions process.

Many Catholic institutions, including the University of Notre Dame, Georgetown University and Boston College have made statements to that effect.

To view a complete list of colleges and universities that have clarified their position on the issue, with links to their respective statements, visit the National Association for College Admission Counseling's database.

BOSTON — Boston College administration says the university is standing by its policy of prohibiting the distribution of birth control on campus in the face of a recent student vote, student newspaper The Heights reported Feb. 22.

Students for Sexual Health, an unrecognized student group, placed a referendum on the ballot for this year's undergraduate government of Boston College election Feb. 15 to allow them to meet and distribute condoms on campus. Of students who voted, 94 percent voted in favor of the group's measure.

"As with Notre Dame, Georgetown, Holy Cross and most Catholic colleges and universities, Boston College does not permit the public distribution of condoms on campus," university spokesperson Jack Dunn told The Heights. "We take this position out of respect for our commitments as a Jesuit, Catholic university, and we ask our students to be respectful of these commitments and the code of conduct that governs all BC students."

STEUBENVILLE, Ohio—Franciscan University of Steubenville will honor its former president and chancellor, the late Franciscan Fr. Michael Scanlan, with this year's Poverello Medal, the university's highest nonacademic honor, the university announced on its website.

Scanlan became president of the then College of Steubenville in 1974, amid institutional troubles and the threat of closure. During his tenure, the college stabilized, increased enrollment, and became a university, while also developing a reputation for its brand of charismatic Catholicism.

Sanclan stepped down as president of the university in 2000, then served as chancellor until 2011. He died in January 2017.

SPRINGFIELD, Ill.—Benedictine University will soon shutter one of its campuses, the Associated Press reported Feb. 28.

The university, whose main campus is in Chicago suburb of Lisle, Illinois, ended its undergraduate program at the Springfield, Illinois, campus in 2014. Since then, the campus had served adult education and graduate programs students.

Students will be moved to other existing sites to complete their studies. Benedictine has many employer-based and community programs in the Chicago area, as well as an operating center in Naperville, Illinois, and another branch campus in Mesa, Arizona.

A report by Decatur, Illinois, Television station WAND cited needed capital improvement as the reason the school decided to end programs at the campus. The property will now be sold.