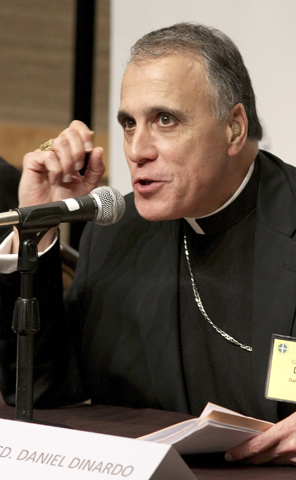 Closed-door meetings about the church's pastoral ministry to families focused mainly on the broader issue of how to support new couples, not on hot-button topics like divorce and remarriage, says a U.S. cardinal who was among the 150 cardinals here last week.

"If there was one thing that came out of the consistory, [it] was that we have to do more to accompany families, particularly the new ones," Galveston-Houston Cardinal Daniel DiNardo said in an NCR interview.

"In fact, in first world countries, cardinals will make the statement that we do pretty well in marriage preparation, but then we don't follow them after they're married," he said. "Everybody was kind of agreeing with that."

DiNardo spoke with NCR Sunday following weekend ceremonies at the Vatican to add 19 new members to the College of Cardinals.

Before Saturday's formal ceremony marking the new cardinals' entry, known as a consistory, the cardinals met in closed sessions Thursday and Friday to discuss an upcoming October meeting of the world's bishops, which is to focus on issues of family life.

Pope Francis opened those sessions last week by asking the cardinals to "deepen the theology of the family and pastoral care we must implement under present conditions."

In a 45-minute interview at the Pontifical North American College, DiNardo said the cardinals' discussions were marked by a wide range of concerns and did not focus solely on issues that have garnered popular interest, like possible changes to church law allowing divorced and remarried Catholics to receive Communion.

In the interview, DiNardo also spoke of how he sees Francis' worldwide popularity, the role of bishops' conferences around the world, and the Vatican's request in October that bishops around the world distribute a questionnaire on Catholics' views on hot-button topics like contraception and same-sex marriage.

"When people say this family thing has got to zero in on something about divorce and remarriage -- I'm sure they'll talk about it," DiNardo said. "But there's bigger eggs to fry when you hear the whole church and what's going on. In Africa, they're still dealing with the very delicate situation of polygamy and the family sense of structure there."

DiNardo, who has served as archbishop of Galveston-Houston since 2006, was elected as vice president of the U.S. bishops' conference in November.

If the U.S. bishops follow their tradition of electing their vice president as president, the cardinal will take over as president of the conference at the end of current president Louisville, Ky., Archbishop Joseph Kurtz's term in 2016.

Speaking of Pope Francis' worldwide celebrity, DiNardo said a key reason people around the world seem drawn to the pope is because he is "very practical in all that he speaks."

"My people in Houston are not going to ask intensely theological questions all the time," he said. "I mean, they aren't. But they love Pope Francis and they think he's very fine."

"They don't ask so many questions as the professionals do with what all's going on in the Vatican," he continued. "They just don't. [They like] that he's out there and he's in favor of the poor and he wants us to live our faith."

German Cardinal Walter Kasper gave a two-hour reflection of the family life theme to open last week's meetings at the Vatican. The talk has not been made available.

DiNardo said Kasper's talk was an "overture" marking out general themes of issues facing the family in the modern context.

"Some people will agree or disagree, and he wasn't saying, 'I'm making a solution,' " DiNardo said. "He was saying, 'These are the questions that you can raise about what's happening.' "

The October meeting of the world's bishops, known as a synod, is to focus on the theme "Pastoral Challenges of the Family in the Context of Evangelization."

In the fall, the synod office, led by new Cardinal Lorenzo Baldisseri, sent a 40-question questionnaire to individual bishops around the world, asking them to distribute the questions "as widely as possible."

DiNardo said he directed his archdiocese to put the questionnaire online, but they received a limited number of responses. To reach out to more people, he said the family life office set up consultations with families and he met with the archdiocesan pastoral and presbyteral councils on the matter.

Asked if knew how the Vatican synod office would deal with the responses to the questionnaire from the world's bishops, said to number in the tens of thousands of pages, DiNardo said he did not know.

"I'm looking at just what we sent in, and I'm saying you multiply that by 180 dioceses in the United States, I don't know what they're going to do," he said. "Even if they summarized everything [by country] and sent it over, there are 152 countries."

Mentioning that Houston has significant Latino and Filipino populations, DiNardo said some of the issues highlighted in media reports about the synod questionnaire were not as important to people in his diocese. Same-sex marriage, for example, was not mentioned as something to discuss, he said.

"Some people say the news media make it sound like Catholics are demanding change," he said. "Most of the reflections in my archdiocese on all the questions were we better do a better job in formation of youth and accompanying people when they're first married."

"Houston's a big, big city, but of Catholics in Houston, the large majority are poor: Latinos, Filipinos," he continued. "They want a church and that faith that's with them and their families."

DiNardo said among the respondents to the questionnaire in Houston, he did not see a significant call to readmit divorced and remarried Catholics to the sacraments. "I mean, there was some that said that, but that was a minority."

"Some of these questions about divorce and remarriage, some of them may say, 'Well, it might be nice, but that doesn't affect me,' " he said.

DiNardo, who served at the Vatican as a staff member for the Congregation for Bishops from 1984 to 1990, also spoke of Francis' expected reforms of the Vatican's central bureaucracy, the Roman Curia.

Over the past months, the pontiff has been meeting with a group of eight cardinals, known as the Council of Cardinals, to discuss the reform of the Curia.

DiNardo said one key reform might be to improve communication between department heads, suggesting that they be gathered together "on a much more regular basis" for discussion "so that we don't have these cross-purposes going on."

The cardinal also said he would support term limits on Vatican work so some staffers could rotate out of Vatican positions every few years.

"For the most part, people who work here should have a term of office and go home," he said.

Asked whether he thought bishops' conferences around the world could be given more autonomy to handle certain issues traditionally handled by the Vatican on their own, DiNardo said he is "not totally persuaded of that yet."

Francis has indicated he may be considering delegating more work to bishops' conferences, stating in his November apostolic exhortation, Evangelii Gaudium, that conferences "are in a position 'to contribute in many and fruitful ways to the concrete realization of the collegial spirit,' " but that desire "has not been fully realized."

DiNardo suggested that bishops' conferences might be able to help with laicization requests for priests or diocesan property issues if those matters were handled by separate groups inside the conferences approved by the Vatican.