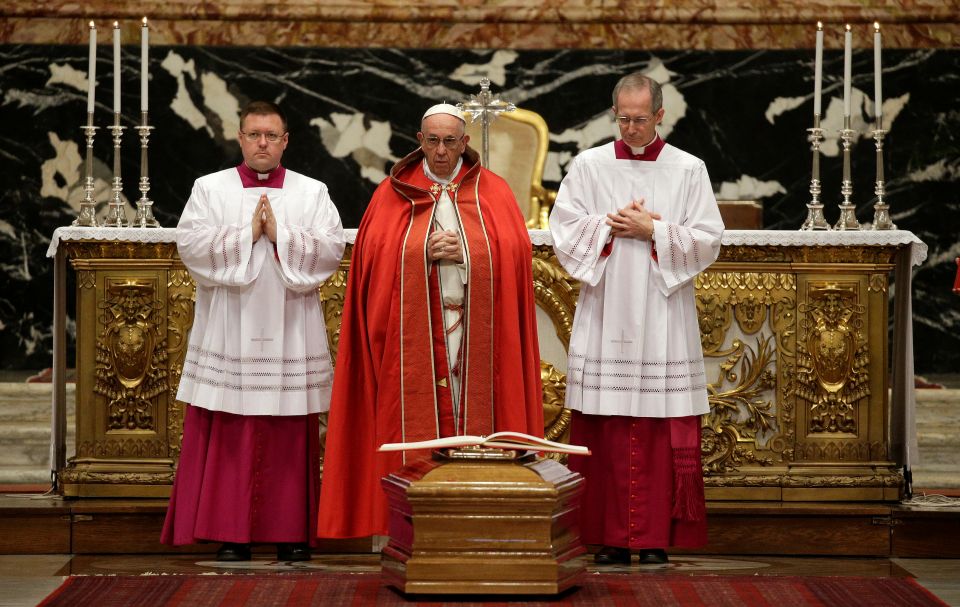 Pope Francis prays near the casket of Cardinal Bernard F. Law at the end of his funeral Mass Dec. 21 at the Altar of the Chair in St. Peter's Basilica at the Vatican. Cardinal Law, who resigned as archbishop of Boston in 2002 when it became clear he had knowingly transferred priests accused of sexually abusing children, died Dec. 20 in Rome at age 86. (CNS/Max Rossi, Reuters)

Vatican City — Cardinal Bernard Law, who resigned as archbishop of Boston when it became clear he had knowingly transferred priests accused of sexually abusing children, made mistakes as all people do, Cardinal Angelo Sodano said at his funeral.

Sodano, as dean of the College of Cardinals, celebrated the funeral Mass for Cardinal Law Dec. 21 at the Altar of the Chair in St. Peter's Basilica.

In his homily, Sodano said, "unfortunately, each one of us can sometimes lack in fidelity to our mission. That is why, at the beginning of every Mass, we say the 'Confiteor,'" the prayer that begins, "I confess to almighty God and to you, my brothers and sisters, that I have greatly sinned."

The pope read the prayers in Latin, sprinkled the cardinal's casket with holy water and blessed it with incense. But he made no remarks about the cardinal or his life.

In his homily, Sodano told the small group of mourners that Cardinal Law had "dedicated his life" to the church with 56 years of service as a priest, bishop and cardinal "of the great diocese of Boston" before his appointment as archpriest of Rome's Basilica of St. Mary Major.

"It was precisely here in Rome that he closed his eyes to this world to open them in the light of eternity," Sodano said.

Callista Gingrich, who was about to present her letters of credential to Francis as U.S. ambassador to the Holy See, and her husband, former House Speaker Newt Gingrich, were among those attending the funeral.

As Cardinal Sean O'Malley, Cardinal Law's successor in Boston, said in a statement Dec. 20: "In the Catholic tradition, the Mass of Christian burial is the moment in which we all recognize our mortality, when we acknowledge that we all strive for holiness in a journey which can be marked by failures large and small."

"Cardinal Law," he added, "will be buried in Rome where he completed his last assignment."

The cardinal was to be buried in Rome's Basilica of St. Mary Major where he served as archpriest from 2004 to 2011.