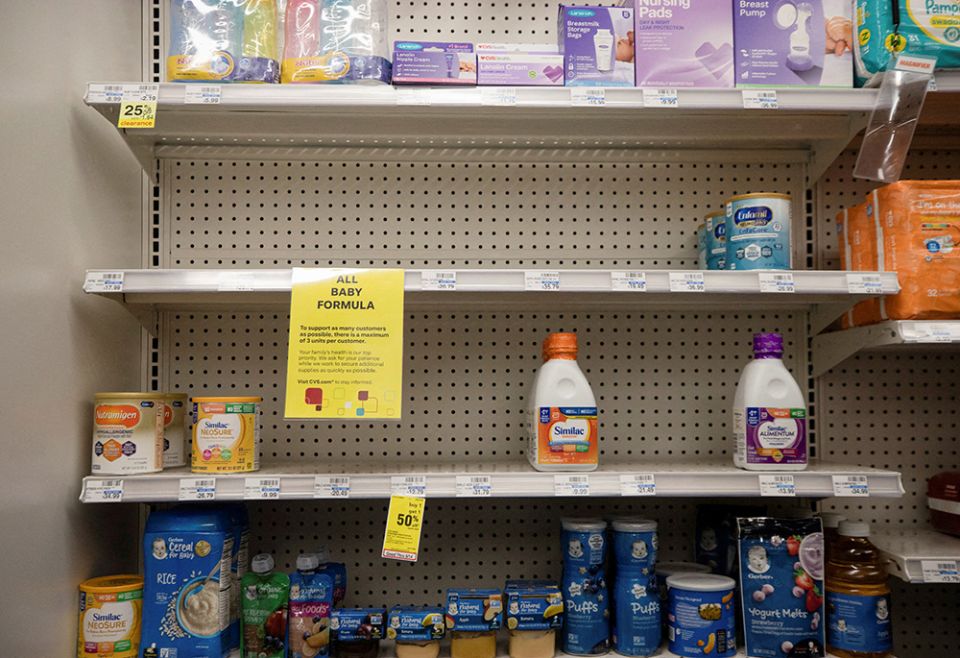 In February, Abbott, one of the biggest manufacturers of infant formula in the United States, closed its plant in Michigan after the Food and Drug Administration found contamination at the facility and recalled a variety of the company's powdered formula. By the end of April, 40% of baby formula was out of stock nationwide. Some states, like Texas and Tennessee, have reported being sold out of over half the formula they have in stock.

As the first shipment of formula from overseas arrived on U.S. soil on May 22, children are being hospitalized in several states as a result of the shortage.

New mom and Catholic Vanesa Zuleta Goldberg exclusively pumped for over a month before deciding to switch to formula.

"Unfortunately, pumping me was causing intense postpartum depression that was not only noticeable by myself, but also by my partner, my parents and people in our support system," Zuleta Goldberg said.

Frustrated by some who have taken to Twitter to shame mothers who use baby formula saying it is not natural, Zuleta Goldberg says that listening to those who have used formula firsthand can support both the mother and child during this difficult time.

Lactation issues are just one reason why parents might need to use formula to feed their babies. Babies might have a lactose allergy and are only able to consume specific types of formula.

"Physiology that may cause low milk supply, a history of sexual assault that may cause pumping or breastfeeding to be a trigger, or quite frankly the convenience of fitting into someone's lifestyle," said Rebecca Christian, a Catholic and doula and lactation counselor based out of Los Angeles, California. "Both breastfeeding and pumping milk are a lot of work and take time and resources to do successfully."

Catholics Nicole and Mon Alejo turned to formula because their daughter was born four months premature and spent almost four months in a neonatal intensive care unit. Their daughter also suffered from necrotizing enterocolitis, a condition that impacts the intestines of premature infants. After treatment, the family is limited to only one type of formula.

"For me as a mom, that typical stimulation that you feel as far as being able to produce because your baby's around or you hear your baby crying. I didn't really have that. I could only visit her a certain amount of hours every day in the NICU," Nicole Alejo told NCR.

The baby formula shortage impacts Black and brown mothers in particular. And for low-income families who are using programs like the Special Supplemental Nutrition Program for Women, Infants and Children, or WIC — vouchers only apply to certain brands and sizes.

Catholic food pantries around the country, many of which families rely on to provide formula, have also been hit hard by this shortage, according to Catholic Charities USA.

In northern Nevada, mothers who can't find formula in the stores are desperately inquiring at Catholic Charities, and Catholic Charities of St. Paul and Minneapolis said that so much time has been spent finding formula that staff can't focus on other projects.

"In addition, the cost to drive and the higher prices of essential items overall have made this all the more challenging for our clients," said Patricia Cole, vice president of external relations at Catholic Charities USA. "I recommend that if anyone does have formula to donate, they should first contact their local Catholic Charities or food pantry to find out what they need."

On May 16, the FDA and Abbott reached an agreement that will allow Abbott to start making formula again by June, but it will still take six to eight weeks for the product to hit shelves across the country. And on May 18, the House of Representatives passed two bills aimed at fixing the shortage.

In the meantime, the Alejos have been moved by people in their life sharing on social media where formula can be found.

"Ask people what they need," Christian said. "If you see formula available, you can purchase it for someone who needs it or donate it directly to a food bank. It's very important not to hoard resources, so please don't buy in bulk. Human milk sharing is also critical for preemies and other families that need it, so volunteering to drive milk stashes is also an invaluable way to help."

No place for a plaster saint