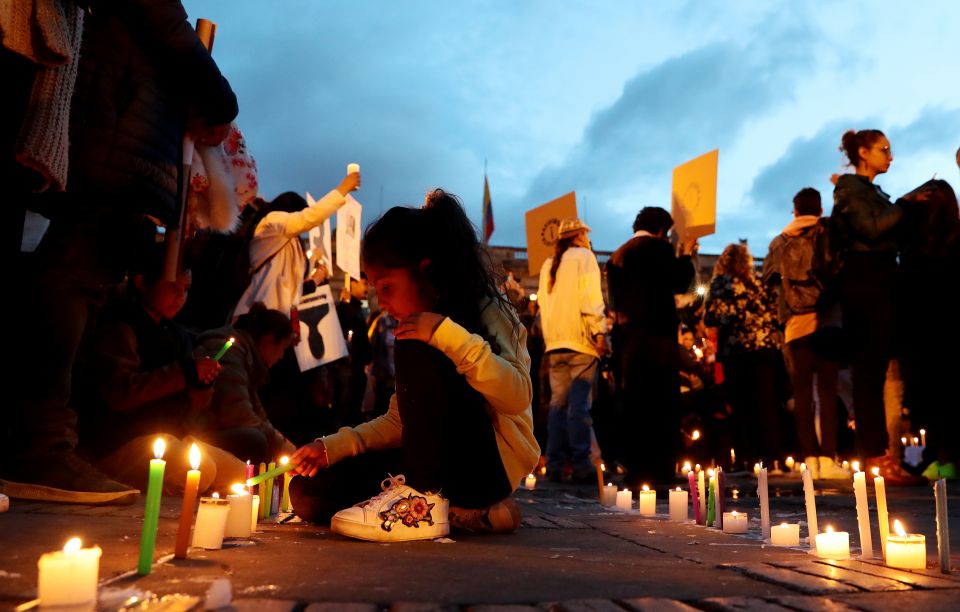 A girl lights a candle during a protest in early July against the killing of social leaders in Bogota, Colombia. If Colombians truly seek peace, they must give up vengeance and seek reconciliation by forgiving themselves and one another, said Consolate Fr. Leonel Narvaez, who has devoted his life to that mission. (CNS/EPA/Leonardo Munoz)

Bogota, Columbia — If Colombians truly seek peace, they must give up vengeance and seek reconciliation by forgiving themselves and one another, said a priest who is devoting his life to such a mission.

"The main reason for the violence in Colombia isn't drug trafficking or guerrillas, but the settling of scores and revenge," said Fr. Leonel Narvaez, a Consolata missionary.

Narvaez, a sociologist who has worked in Africa and in Colombia's Amazon region, established the Foundation for Reconciliation in 2003. The organization's "schools of forgiveness and reconciliation" have expanded to 18 countries.

"What's happening in Colombia is an epidemic of revenge," he said. "And if the main reason for murders is the settling of scores, there's no use in increasing the number of soldiers or police or prisons."

Forgiveness and reconciliation were key themes for Pope Francis when he visited Colombia in September 2017. He met with victims of the decades-long armed conflict that officially ended with the signing of peace accords between the government and the Revolutionary Armed Forces of Colombia, or FARC, the country's largest guerrilla group, in November 2016.

"Innocent or guilty, all are victims," the pope told them, adding the cycle of violence can only be broken "through forgiveness and concrete reconciliation."

To begin to break the cycle, Narvaez said, people must forgive themselves.

"Forgiveness is a process within oneself, to keep resentment from doing you harm," he says. "It shifts the narrative toward compassion."

Only then can there be reconciliation, which reestablishes trust between the victim and the person who harmed them.

The priest sees that in his work with victims of the violence and former members of armed groups. He began more than a dozen years ago with programs that aimed to help men -- "violence in Latin America is generally masculine" -- who had left armed groups rejoin society.

His work expanded to include victims of the violence. The armed conflict had pitted government forces and paramilitaries against two rebel groups. Caught in the middle were millions of civilians who were raped, kidnapped or forced to flee their homes and leave their land.

"The vast majority are angry, cultivating resentment and wanting revenge," Narvaez said. "The victim who does not forgive is a victim forever."

Those who perpetrated violence, meanwhile, suffer guilt and need to forgive themselves before they can begin to consider reconciliation, he said.

Teaching forgiveness and mercy -- key messages of Francis and of Jesus -- is a task for the entire church, Narvaez said, especially in Latin America, which has the highest homicide rate in the world.

While the region is home to about 8 percent of the global population, about one-third of the world's murders occur there. Colombia's homicide rate remains high, although it has dropped by more than half between 1995 and 2015, from 70 per 100,000 to 27 per 100,000, according to statistics compiled by the World Bank.

In the forgiveness and reconciliation schools, small groups of no more than three people work through a dozen educational modules that include topics such as dignity, truth, justice, reparation and memory. A confidentiality pact creates a safe space for people to build trust.

In telling and retelling their stories and working through trauma, resentment gradually gives way to compassion. The final step is a celebration of reconciliation, often on a date of particular significance for the participant.

"Deciding to forgive is a very important moment," Narvaez said.

Manuel Puentes, 50, learned about a reconciliation center in Florencia, a city in the southern Caqueta region, from a former paramilitary. Puentes, who spent virtually his entire adult life in the FARC and now heads an association of former combatants in Caqueta, thought the idea of the center was "idiotic," but agreed to go once.

"Because of that one visit, I stayed for three years," he said.

At first, he thought he would rise through the ranks at the center, just as he had in the FARC.

Instead he began working with communities where former members of armed groups and victims lived side by side, finding ways to bring them together.

"I used to recruit for the war," Puentes said. "Now I'm recruiting for peace."

Pope to visit pope in Egypt