Despite Vatican II, my clergy professors weren't 'allowed to say that' 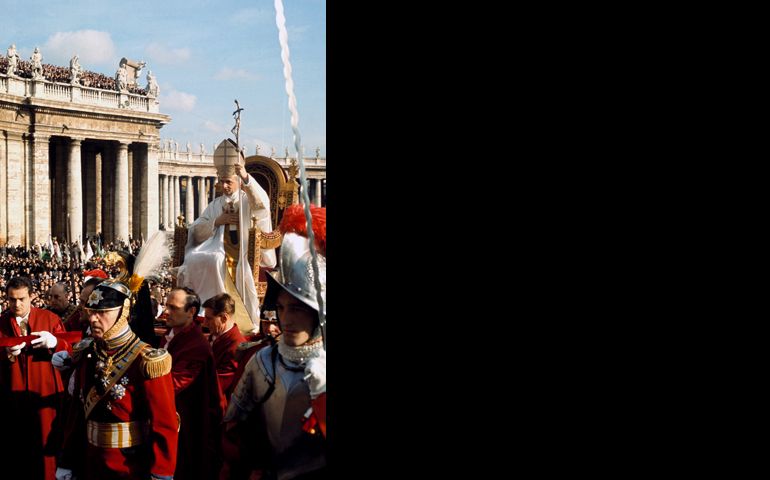 Pope Paul VI is carried on the "sedia gestatoria," a ceremonial throne, during the closing liturgy of the Second Vatican Council in St. Peter's Square at the Vatican Dec. 8, 1965. (CNS/Giancarlo Giuliani, Catholic Press Photo)

I earned my Bachelor of Arts degree from Loyola Marymount University between 1981-1985. I often think fondly of the priests and nuns there -- with whom I was a doting student, and with a few became friends -- but the memories of most of them are bittersweet.

My LMU years happened to fall almost exactly 20 years after the three-year span of Vatican II, from 1962-1965. The male and female clergy at LMU who were over 40, as most were, had been fresh, idealistic novices during Vatican II. Without exception, they were all deeply affected both by that brief period of optimism and upheaval, as well as the aftermath of the recoil as those institutional doors snapped back shut.

One of my three jobs as an underclassman was working for the LMU food service. I shoveled out eggs in the cafeteria line, took money at the cashier desk, waitressed for the in-house catering service at fancy dinners and fundraisers, and on weeknights, I served dinner at Xavier Hall, the Jesuit rectory.

One evening as I cleared plates away, Fr. Tom lingered alone at the dining table, chewing on a swizzle stick (he was an ex-smoker, and that chew-marked coffee stirrer was constantly going in and out of his mouth). Looking at that wiggling plastic stick made me want to gag, so I kept my eyes down and listened. I think Fr. Tom was talking as much to himself as to me.

He recounted how hopeful he had been during the early '60s, how he thought clergy would be able to marry, how he felt empowered about his music and his ministry, how everything felt open and possible. When it was over, instead of moving forward as the clergy had hoped, the papal hierarchy pulled the church firmly backwards, to a place of dark control.

JFK had already been assassinated in 1963. In April 1968, when Martin Luther King Jr. was killed, Fr. Tom had what was then called a nervous breakdown. In June, after Bobby Kennedy's murder, he was institutionalized. Fr. Tom was just plain out of hope.

He eventually recovered and rejoined the Jesuit community at LMU. He taught Christian marriage, coached the golf team, and headed campus ministry. He even sang duets with me for a few fundraisers.

But his joyful ideals had long ago been replaced by a self-deprecating cynicism. Fr. Tom could occasionally let go of a great cracking laugh, but more often, I would find him with slumped shoulders, staring at nothing, chewing on that plastic stick. At his core -- where he stored his faith in church, humanity, and himself -- he was broken. Fr. Tom died in 2007.

A nun whom I will call Sr. Sally -- she is still on the LMU faculty -- also shared her experiences and feelings about Vatican II and its aftermath.

The first time I walked into Sr. Sally's classroom, I seriously did a triple-take, she was so beautiful. She looked strikingly like actress Ingrid Bergman. Strong shapely figure, intelligent blue eyes, wavy hair, full lips. Like Bergman, she wore no makeup, and she didn't need it. It would only have distracted from her womanly perfection.

When I was a grad student, and a student teacher of English 101, I got to know Sr. Sally. She took her students on frequent field trips to the theater in Los Angeles. If she happened to have just two tickets, she and I would drive together to see the play and have lunch.

One afternoon, as I drove us back to the LMU campus in my little green Mustang, she was musing about how Vatican II had affected her order of nuns. She said when their habits were no longer required, one third of the nuns quit. Sr. Sally said she thought those women had liked their nuns' robes for many reasons.

Sr. Sally said that when she was wearing a habit, she was no longer perceived as a woman. She was given instant authority, instant deference. She explained that nuns in habits were perceived as equals to priests. With the habits gone, so was much of the power and respect. A priest in a polo shirt was still a priest. A nun in slacks and Birkenstocks was suddenly less than.

She added that many of the nuns she knew also had issues with their sexuality, whether it was avoiding men due to childhood abuse, or because they preferred the company of only women.

In regular clothes, she said, they were all suddenly just girls. They felt fully exposed. Others could see the curves of their busts and hips. Their hair was no longer covered. The thick buffer between them and the world was ripped away like a shower curtain, leaving them feeling functionally nude.

For her, and for some, it was freeing. She felt she could mingle more organically with her students. She could teach her classes, and move about campus, more easily without the cumbersome robes.

As we pulled into the parking spot in front of her building, I asked her the question that had been tickling me as she spoke.

I said, "You are so beautiful. I mean like movie star beautiful! Didn't being out of the habit get you more attention … from men?"

Sr. Sally blushed, and smiled softly. She brushed her fingers through her salt and pepper short hair, pushing it back from her forehead. Her face showed me she was clearly struggling with what and how much to say.

She looked at me. "There was one man."

I turned the key off, the motor died, and I sat still, looking at the steering wheel, listening.

She told me about a man who had been her co-worker, then her friend, and then he told her he loved her.  She admitted she had warm feelings for him as well. But she had pulled back, stayed true to her vocation, and he had agreed to leave her alone.

She said that decision changed her, made her shy away from interacting with men, and that she often wondered if she had made the right choice.

I nodded, just taking it in. Suddenly, I saw her face change. I saw fear. I saw that she worried she had said too much. That she had exposed more than she wanted to.

I hurriedly mumbled something about how she could totally trust me to be discreet, but I watched as she withdrew, like a sea anemone retracting. She left the car. After that, Sr. Sally was cordial, but she never again shared her tickets -- or her private feelings -- with me.

Fr. Bill's specialty was explicating the Bible, dissecting the Old and New Testaments in relation to their historic and cultural contexts. It was fascinating to learn the back stories in terms of Greek and Roman and Hebrew history, to understand why and how Catholic holidays and dogma originated.

For example, our modern Easter Sunday holiday overlaid both the existing Jewish Passover as well as pagan festivals celebrating the spring equinox. Linking the whole idea of rebirth and renewal -- the delivery of the Hebrews from Egypt, the annual awaking of the earth, and the resurrection of Christ -- made total sense for the early Christians.

We also learned that the story of the virgin Mary being visited by the Angel and then magically pregnant has its origins in Greek and Roman mythologies' countless god and virgin pairings. The early Christians chose gospels that used the virgin birth story - -much like the Greeks' Leda and the Swan — so that people in that place and time would understand the joining of God and man, with the resulting child being both of heaven and earth.

Once we reviewed similar virgin birth stories in most religions around the world, including Islam, Buddhism, Hinduism -- and the mythologies of Egypt, Babylon, Assyria -- we understood this story's deep symbolic resonance for Christ's followers 2,000 years ago.

But since Mary's virginity is considered dogmatic fact by church leadership, the next logical step was to question whether or not we need to take that story literally. If we know it to have symbolic origins, and there is historical evidence that Jesus had siblings, do we need to continue to believe that Mary was a virgin, and that Jesus' birth was miraculous?

When I raised my hand, and asked that next obvious question, I saw Fr. Bill's face change. The smile he had radiated as we batted ideas around the room vanished.

He said, "We are not allowed to say that."

I blinked, literally stunned by his answer. What do you mean we aren't allowed to say that? You give us all this information, teach us to pull apart each line of the Bible to expose the history underneath, and then you say, "Oh, by the way, you have to stop here?"

I raised my hand again. He pointed at me, but I think I saw him wince.

I said: "And if Jesus' mother was not a virgin, and he is then simply human, doesn't that mean that we are all divine like he was? Isn't that an even better message? Isn't that what Jesus came to show us with his life and death? How to treat each other, then how not to fear death? Because we are all his brothers and sisters, all God's children, all eternal … just like him?"

Fr. Bill looked down at his podium. He said quietly, "We are not allowed to say that, either."

It suddenly hit me. Here was this crazily intelligent Jesuit. He had years and years of education under his belt, was a passionate and effective teacher, but he operated in a virtual cage. He was surrounded by brick walls of what was allowed, what was dogma, what was heresy.

Like Fr. Tom, he came into the church believing that Vatican II would usher in a time of liberating dialogue for all Catholics. That celibacy would be optional, that debate would be encouraged, that priests and nuns could interact in their communities and the world like the humans they are.

If Fr. Tom was right to hope that the Catholic church was going to change the world for the better, if Sr. Sally was entitled to be both a powerful nun and a beautiful woman, and if Fr. Bill was correct in his biblical explication, being human should have been more than enough. But, from the end of Vatican II to date, we aren't allowed to say that.

People | Despite Vatican II, my clergy professors weren't 'allowed to say that'

In defense of the Vatican's 'back to the future' Nativity scene