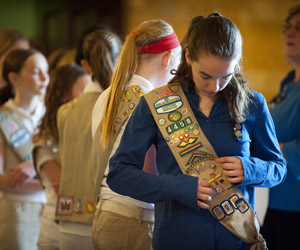 A Girl Scout cadet adjusts her sash during an awards ceremony at the Cathedral Basilica of St. Louis this year. (CNS/St. Louis Review/Lisa Johnston)

PHILADELPHIA -- Tina Kent credits the Girl Scouts for teaching her skills in leadership, conflict resolution and critical thinking and for giving her an appreciation for the outdoors and opportunities to travel.

Kent became a Brownie at age 8 in her native Vermillion, S.D., and remained a Scout until she was a teenager in Waco, Texas.

Now a wife and mother of five, Kent lives in the Diocese of Harrisburg, Pa., and is a Girl Scout troop leader in York, Pa., where her troop meets at St. Joseph Catholic School.

Her daughter Maggie, 7, a first-grader at the school, is a Girl Scout Daisy. Kent hopes daughter Ruth, 3, will one day join her sister in the Scouts.

Among other projects, her troop makes Christmas and Valentine's Day cards for the elderly and this year donated 46 boxes of Girl Scout cookies to the local Catholic food pantry and sent 85 boxes to a girls' school in Afghanistan.

"As Catholics, we are called to be serving other people, to be reaching out, to be trying to do good in this world," said Kent, 44, who became a Catholic at Easter 2003 when she was 35.

Kent is well aware of claims by some that the Girl Scouts of the USA promotes Planned Parenthood and its advocacy of birth control and abortion. Others have complained that some printed material distributed to Scouts contained references that countered the Catholic Church's teachings.

After looking into the criticism herself, she told Catholic News Service, "I just don't buy that it's happening."

The Girl Scouts of the USA, known as GSUSA, is marking its 100th anniversary this year. It has 3.2 million girl and adult members. An estimated 500,000 Catholic girls and adults in the U.S. are involved in Girl Scouts.

Criticism of the Girl Scouts as an organization has surfaced off and on over the last several years and earlier this year made the rounds again on the Internet.

In response GSUSA has strongly stated it "does not have a relationship or partnership with Planned Parenthood and does not plan to create one" and takes no position on abortion or birth control. "Parents and volunteer troop leaders in Catholic churches," it said, "have total control of the Girl Scout programming their girls receive."

Given the large number of Catholics involved in Girl Scouts, such concerns prompted the bishops' Committee on Laity, Marriage, Family Life and Youth at its mid-March meeting to discuss GSUSA's "possible problematic relationships with other organizations" and questions about some of its materials and resources.

In a March 28 letter to his fellow bishops, committee chairman Bishop Kevin C. Rhoades of South Bend-Fort Wayne, Ind., said some questions may need to be answered at the national level and others at the local level.

Among other actions, he said the committee wants to develop a resource bishops can share with priests, youth ministers, pro-life directors, educators and others in their diocese on Catholic identity for troops and guidance for parents.

The bishop invited Robert McCarty, executive director of the Washington-based National Federation for Catholic Youth Ministry in Washington, and Kathleen Carver, the federation's associate director and communications director, to the meeting to give committee members their perspective on the claims made about the Girl Scouts.

The federation's website, www.nfcym.org, has a question-and-answer section on the issue, and according to McCarty, dialogue between the national Girl Scouts office in New York and the federation has been ongoing.

McCarty told CNS April 9 that the bishops' Secretariat for Laity, Marriage, Family Life and Youth would convene a group soon to discuss what resources and tools would help create dialogue among church and Girl Scout leaders "more intentionally" and provide clear guidelines for predominantly Catholic troops where "Catholic teaching is honored and at the forefront."

Beyond the church's relationship with Girl Scouts is the bigger issue of "how does the church engage secular organizations?" McCarty stated. "We advocate for church teaching through direct engagement and honest respectful dialogue."

In an earlier interview with CNS, McCarty said he has met with Girl Scout leaders in New York to convey concerns the federation has heard from the field, though he rejected the claim that Girl Scouts promotes Planned Parenthood.

In January, Anna Maria Chavez, a Catholic who has been the Girl Scouts CEO since last November, came to Washington from New York, along with the chair of GSUSA's board of directors, to meet with McCarty.

"For nearly 100 years, we have partnered with the Catholic Church to support the growth and development of millions of girls," Chavez told CNS April 19. "It is a wonderful legacy and we're grateful for the opportunity to participate in the process that will only enhance our partnership."

She said her organization has had meetings with Catholic dioceses around the country and said "those conversations have been very valuable in strengthening that relationship."

"Working closely together, we will continue to provide girls with the courage, confidence and character they will need to make our world a better place."

McCarty said the assertion Girls Scouts has a relationship with Planned Parenthood arose from a statement the previous CEO made in 2004 on broadcast television in which she listed the organization as one group among many with whom the Scouts maintained a relationship.

"That," he stressed, "was eight years ago, and, that has changed."

Other criticism has been directed at the World Association of Girl Guides and Girl Scouts, known as WAGGGS, which, for example, has advocated for emergency contraception for women in Third World countries, McCarty said. GSUSA is one of WAGGS' 145 member organizations.

In the Archdiocese of Kansas City in Kansas, Deacon Dana Allen Nearmyer, a consultant for evangelization and Catholic formation in the archdiocese, said Catholic leaders are concerned by the fact the GSUSA sends money to WAGGGS.

"We've said that's not acceptable," Deacon Nearmyer told CNS in a recent interview. "Our recommendation would be that they would stop funding the World Association of Girl Guides and Girl Scouts."

No Scouts' dues or registration fees go to WAGGGS, but GSUSA sends investment earnings to the international group.

McCarty likened the relationship between the Girl Scouts and WAGGS to that between the United States and the United Nations. That association, he said, does not imply that the U.S. is aligned with everything the U.N. advocates.

"The Vatican has a role at the U.N. I don't see the Vatican walking away from the U.N.," he added. "The Vatican is there to engage the U.N. through the lens of Catholic social teaching and church teaching."

Another criticism arose over Girl Scout material that included a link to a play written by a girl who questioned her parents and the Catholic Church, McCarty said. "When we raised that issue with the Girl Scouts, they took it out. They reprinted their books."

"We appreciate being part of the conversation and moving the curriculum of Girl Scouting to its more traditional, original roots -- protecting families. We also value their national connection and notoriety," he said.

"But ... at some point, if parishes are looking for something that's a more substantial faith organization, Girl Scouts is only going to be able to carry them so far because they're a secular organization."

The Life: It's all about helping women survive and succeed

Muslims in NJ city fear another backlash after latest attack