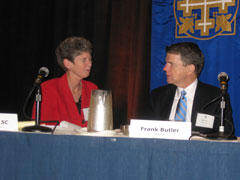 WASHINGTON -- Francis J. Butler -- who usually worked quietly behind the scenes but may have been as influential as almost any other layperson in the U.S. Catholic church over the past 40 years -- retired Feb. 3 after 32 years as president of FADICA, Foundations and Donors Interested in Catholic Activities.

During his tenure, FADICA and its member foundations and donors have played key roles in some of the most fruitful Catholic initiatives of recent decades in the United States and abroad. Just a short list of FADICA initiatives that have borne fruit under his guidance would include:


When Butler, who earned a doctorate in theology and was director of the U.S. bishops’ Office of Domestic Social Policy from 1973-80, joined FADICA as president in 1980, four years after its founding, it was a coalition of just 12 Catholic-oriented foundations with total assets of $235 million and annual charitable grants of about $15 million.

FADICA’s most significant contribution to the church over the past three decades, however, probably lies in how Butler organized regular programs that educated its member donors and foundations and helped them network with one another and channel their grants effectively to support projects that serve not only the church, but the common good of society.

Will Raskob, a member of the $140 million Raskob Foundation and FADICA board chairman, said the regular symposia and conferences Butler arranged over the years were “the easiest way to get educated on the issues.”

Sr. Sally Duffy, a FADICA board member and president of the SC Ministry Foundation, a $200 million organization of the Sisters of Charity of Cincinnati, told NCR that what FADICA is about is “supporting the mission of the church.”

“For me that happens in many ways through FADICA,” she said. “The learning, the friendship, the networking, the prayer, the discernment, and, quite frankly, Frank exhibited excellent leadership in terms of catalyzing all that for the membership.”

She added, “He was very supportive of women religious, not only what we’ve done historically, but who we are today and hopefully what we will be about in the future.”

In an NCR interview upon his retirement, Butler focused on future challenges facing the U.S. church and FADICA members as they respond to those challenges. He especially highlighted two:

Butler gave the closing address at the organization’s annual symposium Feb. 3. He said the FADICA model of collaboration has proven itself over time. Recent scholarly studies “have documented that cooperative behavior cascades and thrives in human networks, amplifying charitable behavior,” he said.

Butler told NCR he thought one of FADICA’s proudest accomplishments during his tenure was its support of women religious, especially orders that faced enormous unfunded liabilities to support the health care and other costs of aging members -- women who had spent decades carrying out the church’s educational, health care, and social and charitable missions for tiny stipends that barely covered their current modest living costs.

Two of FADICA members’ first contributions in that area were funding studies by the U.S. Conference of Catholic Bishops that revealed the extent of the problem, and funding the formation and initial budget support in the mid-1980s for the National Religious Retirement Office.

Those actions led to the bishops forming a national collection, first held in 1988, to help meet religious retirement needs. Every year since it was started, proceeds from that collection have dramatically exceeded those of any other national collection in the U.S. church, averaging $27.5 million a year in its first 20 years.

A third FADICA contribution to women religious, Butler said, was its members’ formation of SOAR -- Support Our Aging Religious -- a supplementary independent Catholic fundraising program across the country that regularly raises a million dollars a year or more to provide medical equipment and other necessities for aging women and men religious.

FADICA also played a central role in U.S. Catholic aid to dioceses, seminaries and other church institutions in Central and Eastern Europe following the collapse of communism and the end of church persecution throughout the former Soviet Union and Warsaw Pact countries.

FADICA foundations organized three fact-finding visits to Central and Eastern Europe following the collapse of communism, bringing along some three-dozen U.S. bishops to see firsthand both the enormous obstacles and the immense new opportunities the Catholic churches in those countries faced.

In 1990 the U.S. bishops’ conference approved a yearly collection, Aid to the Churches of Eastern and Central Europe, which since has netted about $8 million a year -- an amount surpassed only by the religious retirement collection.

The Eastern Europe and aging religious collections -- both inspired by direct FADICA funding activities and its lobbying with the U.S. bishops -- may be among the more obvious examples, but they barely graze the surface of how FADICA has affected church life in the United States and internationally.

Butler said FADICA foundations looked at the looming conflict, and the philanthropists wanted to bring both sides together in a constructive dialogue.

“We approached Bishop [John J.] Leibrecht [of Springfield-Cape Girardeau, Mo., then head of the bishops’ Subcommittee on Bishops and Catholic College and University Presidents] and asked, ‘How can we help?’ ” Butler said.

The result, he said, was that FADICA foundations funded a special temporary office at the bishops’ conference, headed by a Jesuit theologian and former Catholic university president, Fr. Terrence Toland, to sponsor a years-long dialogue between higher education leaders (organizationally represented by the Association of Catholic Colleges and Universities) and the bishops on how Catholic institutions of higher learning could reaffirm and strengthen their Catholic identity and mission in accord with the apostolic constitution while at the same time retaining commitments to academic freedom and autonomy.

The association’s current president and CEO, Michael Galligan-Stierle -- who was the U.S. bishops’ assistant secretary for higher education and campus ministry during the years the implementation of Ex Corde was being worked out -- told NCR that dialogue was critical: “I don’t think we would be where we are today were it not for the efforts of the USCCB, working in cooperation with the ACCU.”

In the years since publication of the apostolic constitution “we have achieved a remarkable level of open dialogue between our college and university presidents and their bishops,” he said.

“It was a low-key intervention. That’s our style,” Butler said of the FADICA members’ contributions to that dialogue.

But the results, he said, were “wonderful conversations ... heart-to-heart discussions” out of which the bishops crafted U.S. implementation norms for Ex Corde that Catholic higher education leaders could live with, and the colleges and universities involved found new ways to affirm and promote their distinctive Catholic identity and mission without abandoning academic freedom and autonomy. “The rest is a fairly happy history,” he said.

Butler spoke with special pride of the $7.5 million that FADICA members contributed after Hurricane Katrina to help women’s religious orders in New Orleans restore their educational and social ministries in a city sorely in need of their services.

The problem was pretty basic. First, the Federal Emergency Management Agency could help families or businesses with recovery funds, but religious orders, as communities rather than families or businesses, were not eligible for FEMA funding. Second, massive relief efforts funded by U.S. Catholics through Catholic Charities USA were designated chiefly for immediate relief or long-term recovery programs for individuals and families. Third, a special collection later taken up in parishes across the country was designated to assist hurricane-affected dioceses, mainly New Orleans and Biloxi, Miss.

FADICA initiated a disaster relief program directed at the religious orders that fell through the cracks of all those other church and federal programs.

Duffy, the Cincinnati Sister of Charity, coordinated that joint project by FADICA and the Leadership Conference of Women Religious. She said those New Orleans communities of women religious were battered by losses from the hurricane, their ministries in disarray, and in many cases unfamiliar with what a grant request to a foundation should look like. What FADICA did, she said, was not only help open its members’ coffers, but also assist the communities in developing grant requests that the FADICA foundations could process by their regular grant-making standards.

The result, she said, was an infusion in a relatively short time of about $7.5 million from other FADICA members, on top of about $5 million from SC Ministries Foundation, that put many of those orders’ educational, health and other social ministries back in action during the early stages of New Orleans’ recovery from Katrina.

She also noted that Catholic Charities USA, in a later meeting at FADICA’s offices, agreed to new rules that would allow future disaster relief donations to be distributed to religious order ministries as well as to individuals and families.

Butler said one of the main concerns of FADICA members in recent years has been the promotion and preservation of Catholic schools, “the most effective instrument for transmission of the faith” that the church has.

Another of FADICA’s key programs is formation of a next generation of Catholic philanthropists to understand the nature and role of philanthropy through programs like its Future Foundation Leadership Venture, Butler said.

He said FADICA has sponsored trips to Rome, Kenya, Tanzania and other places to help younger members experience church needs abroad and how their foundations can contribute to addressing those needs.

Its programs also include leadership institutes, mentoring, networking and other ways of introducing the next generation of FADICA member families into the vision and discipline of effective Catholic philanthropy, he said.

At the end of an interview, Duffy summarized Butler’s contributions to FADICA.

“Frank has touched our lives, and we’re better for it,” she said. “He’s just a good, good, holy man -- and very influential, needless to say.”

Mother Teresa and the secular scribe

Commentary: I am mourning Fidel