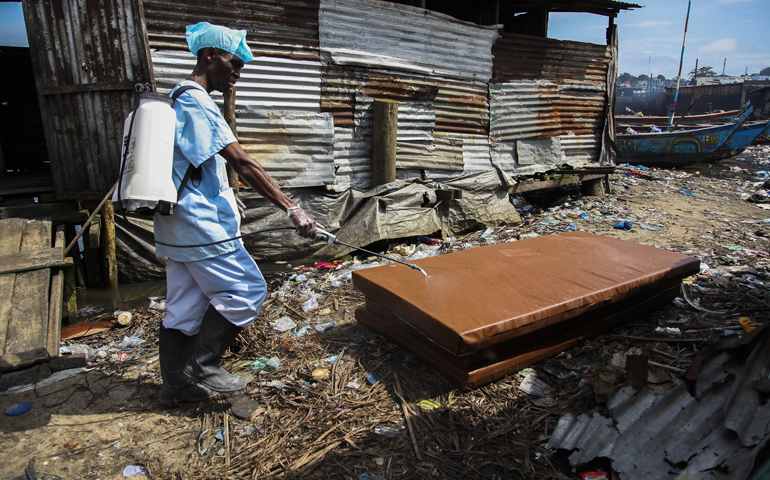 A Liberian nurse disinfects a looted mattress taken from a school that was used as an Ebola isolation unit in Monrovia, Liberia, on Tuesday. (CNS/EPA/Ahmed Jallanzo)

When the Peace Corps announced in late July that it was evacuating its 340 volunteers from the three West African countries most affected by the Ebola virus, the action was far from a panic-driven decision, but instead followed a protocol.

A similar protocol for health and security risks has led Catholic Relief Services to keep its personnel in the same countries -- Liberia, Sierra Leone and Guinea -- while following enhanced sanitary procedures and restricting most travel.

In a globalized society in which millions of people regularly cross international borders, a coup, a virus, tribal clashes or a natural disaster can toss whole regions into chaos for business and vacation travelers, expatriates and volunteers. U.S.-based organizations with employees or volunteers in global hot spots rely on multilayered systems to provide up-to-the minute information, advice and, if evacuation is in order, logistical support.

For example, Pamela O'Connor, executive vice president of human resources for Catholic Relief Services, said her agency relies on a company called International SOS to provide constant risk monitoring, establish plans for a range of possible emergencies, provide security if necessary and get personnel out of a location.

Ongoing analysis has so far kept CRS employees on the job in the countries dealing with Ebola, because they work in projects that put them at low risk of encountering people infected with the usually deadly virus. CRS programs for education, nutrition and agriculture are continuing to operate, although employees have been given refresher training in disease prevention, taught about Ebola and provided with cleaning products to help fight the spread of germs.

CRS has even expanded some programs in West Africa. An Aug. 18 press release said CRS would scale up prevention, preparedness and disaster management in Guinea, Liberia, Sierra Leone and adjacent Ghana.

"We deal with crises every day," O'Connor told Catholic News Service in a phone interview, explaining that the U.S.-based relief and development organization routinely keeps in touch with the State Department, the World Health Organization, the Centers for Disease Control and Prevention and local health and security agencies in every country where it has staff.

In any situation where employees are at risk from security or health crises, "we don't want to overreact, but we don't want to underreact either," she said. Decisions to close an office and withdraw staff are not made lightly, in part because CRS employs many local people, who likely will remain behind if employees from the U.S. or other countries are withdrawn.

In July, CRS had to temporarily close its operations in Gaza because of shelling between Israel and Gaza, she said. One CRS expatriate employee was evacuated to Jerusalem for a time, while others insisted on continuing to work from home. After a career in human resources management, O'Connor said, "I've never seen a staff so dedicated to the mission" as CRS employees around the world have been.

Calculations about safety are different even among nongovernmental organizations operating in the same regions.

Mark Andrews, vice president of volunteer and institutional engagement for Habitat for Humanity International, said the threshold for Habitat to evacuate volunteers in its Global Village programs is generally more conservative than it would be for "crisis NGO's" such as Doctors Without Borders or the Red Cross. "We're more proactive than reactive," he said.

Like CRS, Habitat uses an outside company to monitor security and health information around the clock for the dozens of countries where it has volunteers. Teams of 10 to 20 people travel from their home countries to spend a week or two helping build houses alongside homeowners in the developing world. The Global Village program will have more 12,000 volunteers this year across Central and South America and from Borneo to Bulgaria.

By comparison, CRS is usually worried only about its own resident staff members, who go through extensive security training. But in the developing countries where Global Village is active, Habitat manages sometimes multiple teams at a time of short-term volunteers who have little to no security training and may have never before traveled outside the U.S. or other highly developed countries.

So, Andrews said, that means Habitat will very quickly heed travel warnings by the State Department and its counterparts. For example, should a status "go red," meaning the State Department is warning against all travel to a given country, "we will not send a team from the U.S.," Andrews said. But if, for example, the Australian and U.S. governments come down differently on the risk of travel to a given country, an Australian team might still go to a country its government considers safe, even if the U.S. State Department warns against travel. A U.S.-based team would not be set to that country, Andrews said.

Situations that occur once volunteers are already in a country are weighed for how to respond, said Andrews. For example when the Royal Thai Armed Forces led a coup against Thailand's government in May, there was a Global Village team in the country.

"We had them shelter in place in a hotel for three days until we could arrange flights out for them," Andrews said. Two other teams that were supposed to go to Thailand in the following weeks were rerouted to other countries in Asia.

The approach of the Catholic Medical Mission Board, or CMMB, falls somewhere between Habitat's and that of CRS.

Remie Christ, senior vice president of marketing and communications, told CNS there currently are no permanent staff members or volunteers for the medical aid agency in the Ebola-stricken region. She explained that the agency's focus is on longer-term programming, such as HIV/AIDS prevention and treatment, maternal and child health, combatting malaria and developing interventions for chronic illness and disabilities.

There are currently 27 long-term volunteers around the world, who have an average tenure of about one year, although 15 people have been medical mission board volunteers for more than five years, according to Christ. In addition, the agency has 400 paid staff members in its five country offices in Peru, Haiti, Zambia, South Sudan and Kenya.

Although the agency doesn't intentionally work on disasters, Christ said, sometimes crises occur around its volunteers. She said there was a team in Haiti when the 2010 earthquake devastated the tiny country. The volunteers stayed and their focus shifted to emergency medicine for a while.

Each client has different issues to consider, Quigley said. "You can't use a cookie cutter approach."

For instance, he explained that some NGOs' needs are similar to those of academic institutions, which may be much more conservative about protecting personnel and volunteers than would an NGO that provides crisis services, or a news organization trying to report on a bad situation.

International SOS generally starts by preparing contingency plans, using local resources in pertinent countries, he said. When a situation changes, it relies upon a range of resources, including its own employees. The company has a network of more than 1,200 doctors it uses around the world and more than 2,000 employees, many with military background.

He said the company's hub-and-spoke system means it has 27 assistance centers around the world from which it can reach tens of thousands of service providers.

"There are very few square meters on the planet where we can't operate," Quigley said, "including Antarctica."