The faith and new mission of Tony Blair 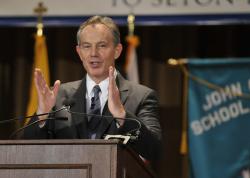 SOUTH ORANGE, N.J.
His hair grayer and a bit thinner than one remembers from his decade in 10 Downing Street (1997-2007), former British Prime Minister Tony Blair, 55, still takes to an audience with the youthful passion and pursuit of persuasion he brought regularly to "Prime Minister's Question Time" during Parliament sessions or even to the royal household.

Those in America who did not know of his efforts to cajole Her Majesty into holding a public funeral for Princess Diana, when Diana died in a car crash in Paris three months after Blair took office, learned about it in the Oscar-winning film "The Queen."

But those watching the real Blair at the real royal funeral also observed something passing strange in Britain where religion, if spoken of at all, is generally regarded with suspicion, even derision. They saw their highest elected official, a Laborite, at home in the pulpit, reciting -- seemingly without a script -- St. Paul's lesson on love.

It was the same Tony Blair who bounded onto the stage of the Walsh Gymnasium at Seton Hall University here Feb. 3. Delighted -- no, apparently amazed -- when 2,000 students, faculty and guests gave a standing ovation, he remarked: "This is not what I'm used to." Although he won two landslide majorities, Blair's later years and third term saw ministerial resignations and public protests over his siding with the Bush White House on the Iraq war and committing 40,000 British forces to the invasion.

Losing popularity at home has not cost him his place on the world stage. Shortly after handing over the prime minister's job to Gordon Brown, Blair set up shop in a Jerusalem hotel, where he serves as special envoy on behalf of the European Union, Russia, the United Nations and United States in joint efforts to broker peace between the Israelis and Palestinians.

Last May he launched the Tony Blair Faith Foundation to aid religious leaders, especially moderates within Judaism, Christianity and Islam, in countering extremism within their creeds. The foundation seeks to educate the public on how harmony among religions can enhance global security.

Faith and globalization are the twin pillars of a course Blair has brought to Yale University this semester and has made available for reproduction elsewhere.

Blair's charity hopes to tackle the U.N.'s Millennium Goals of alleviating poverty, advancing universal primary education and improving health care. It is encouraging faith groups to donate mosquito netting to ensure that malaria no longer attacks 500,000 persons annually and causes the preventable deaths of 850,000 each year.

Some in Europe point to the influence that Swiss theologian Fr. Hans Küng has had on Blair. Küng -- president of the Global Ethics Foundation, based in Germany -- and Blair are friends. Blair was the keynote speaker at the Global Ethics Foundation's annual meeting in 2000. But before that, he was reportedly taken with Küng's idea that peace among nations will not arrive until there is first peace among the world's religions.

There are those in the British press who believe Küng persuaded Blair to become a Catholic, an assertion unsubstantiated by either man. Blair, who was received into the church six months after leaving Downing Street, has credited his conversion to his wife's deep faith and to his own long engagement with spiritual questions.

Some of his critics in the church have accused Blair of hypocrisy, noting that on his watch Britain legalized human cloning and civil unions for gay couples and liberalized its abortion laws. In answer to a Seton Hall student's question, Blair said his decision to convert was a "private" one, which would have become "public" had he made it in office.

Born in 1953 in Edinburgh, Scotland, to a militantly atheistic father and a non-churchgoing mother, Blair attended school in Edinburgh and in Durham, England, city of Venerable St. Bede, the early chronicler of Anglo-Saxon and church history. He studied law and met his wife, Cherie Booth, a lawyer, while a student at Oxford University in the 1970s.

At the annual prayer breakfast held Feb. 5 in Washington, keynoter Blair related how his schoolmaster had comforted him and reassured him of God's love for his father, who had a heart attack when Blair was 10. Despite his father's unbelief, the teacher told him God loved him without demanding or needing love in return.

"That is what inspires: The unconditional nature of God's love. A promise perpetually kept. A covenant never broken," Blair told the breakfast guests, who included President Barack Obama. Both leaders related how their experience with faith-filled people inspired them in their search for the divine. In Obama's case it was the example of community organizers working out of a Catholic church on Chicago's South Side that led him to become a Christian, the president said.

Whether at Yale, Seton Hall, addressing political and faith leaders in Washington or listening to the many sides in the Middle East quagmire, Blair is out of office, often out of Britain and no longer guarded about his faith and the role that religion can play in dealing with the world's dilemmas.

He believes "faith motivates, galvanizes, compels and inspires ... billions of people" to do good and to embrace rather than exclude others. Yet so often it is a source of conflict rather than an instrument of understanding, Blair told Seton Hall students.

He urged future practitioners of diplomacy and development to adopt a set of "global values" that include a belief in freedom, democracy, justice and the power of community.

In Washington, Blair was more outspoken on the place of faith in our future: "The 21st century will be poorer in spirit, meaner in ambition, less disciplined in conscience, if it is not under the guardianship of faith in God." But he said he did not want "to blur the correct distinction between the realms of religious and political authority."

Nor did Blair wish to diminish the work of humanists, who, he said, "give gladly of themselves for others and who can often shame the avowedly religious. ... I only say that there are limits to humanism and beyond those limits God and only God can work."

Just how God would act to solve what Blair called the world's most urgent issues, the economy, environment and security, he did not say. But in confronting these interrelated challenges, he noted that solutions could no longer be national or regional but must be global. "It's not simply the sense of wanting to assume responsibility," he told students. "It's a belief there is something more important than ourselves."

It was a new audience and a new world with new problems. But from the thunder of their applause, many, it seemed, took inspiration from the now senior statesman spreading himself and his hopes in new pulpits across a troubled economic, political and environmental landscape.

Patricia Lefevere is a frequent contributor to NCR.

Printed in the Mar. 6 issue of NCR.

People | The faith and new mission of Tony Blair

What the US needs most right now, what we lack, is community

Get vaccinated, get a booster