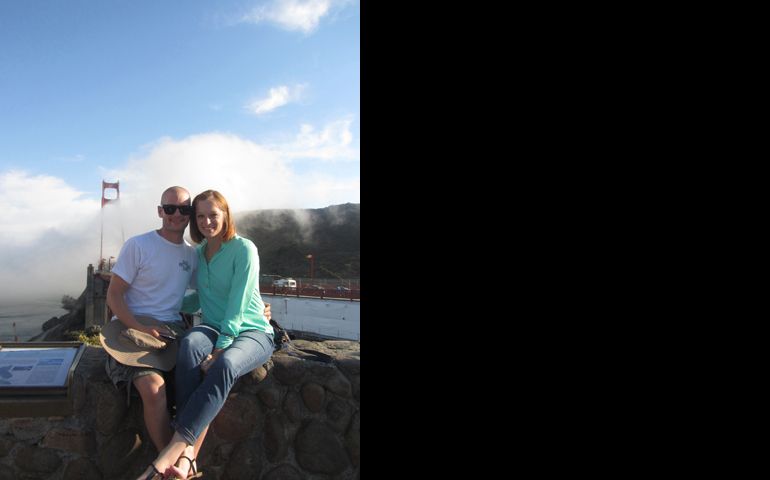 Macklin Swinney of Indianapolis and his girlfriend, Callie Bontrager, during a trip to San Francisco last summer (CNS/The Criterion)

Indianapolis — The moment touched Fr. Rick Nagel as he visited Macklin Swinney in the hospital and listened to the young man share the remarkable resolution of what he was giving up for Lent.

At the time, Swinney, then 26, had already been diagnosed with the most severe stage of skin cancer and had been given little chance of surviving.

It was a dark, frightening period for Swinney. But he still wanted to make the most of whatever time he had left in his life, including making the most of his decision to be baptized and become a member of the Catholic church.

Swinney made that decision after joining his grandparents for Mass one Sunday at St. John the Evangelist Church in Indianapolis, where Nagel is the pastor. Swinney had been moved that Sunday by Nagel's homily that focused on the themes "God wouldn't put things in our lives if we couldn't handle them" and "everything happens for a reason, even if we don't know it at the time."

Believing he was being called to God and the church, Swinney talked to Nagel after the Mass. And he soon started the Rite of Christian Initiation of Adults process to enter the church.

When his struggle with cancer forced Swinney into the hospital, Nagel came to visit. During one visit when they talked about Lent, Swinney shared the resolution he wanted to make.

The priest was stunned and inspired.

"If you're faced with death as a young man, and there's not much hope of medical recovery, the natural human tendency is to be afraid," he told The Criterion, Indianapolis' archdiocesan newspaper. "I was struck by how God had worked so beautifully in that moment to have this young man in his wisdom say, 'I'm going to give up fear.' "

More than a year has passed since Swinney made that resolution in the winter of 2013.

It is now the spring of 2014, just a few weeks after his doctor told him there is nothing more they can do for him.

It is also just a few weeks after Swinney began an alternative treatment that has given him a measure of hope. Since mid-March, he has lived at his grandparents' home in a hospice setting.

Even in a time of so much uncertainty in his life, Swinney's resolve to give up fear has stayed strong. He remembers when he first made that resolution.

"It was a scary time in my life," he said about the 2013 return of his cancer that had first been diagnosed in 2010. "I was facing death again. Not only that, I had a fear of what I would leave behind, what I hadn't accomplished, what I would have to go through with treatments, and how it would turn out. I decided to leave it to God. I thought if it was possible to give up fear, I would. It's been a freeing experience.

"Without fear, I didn't have the anxiety that loomed around all the time. It took a lot of things out of the equation. It let me focus on my life."

During Lent of 2013, one of Swinney's main goals was to be baptized in the church. When Swinney's life was threatened by the return of the cancer, Nagel arranged for an emergency baptism for him just before last Easter.

"It was very powerful," Swinney recalls. "I had a lot of friends and family who rallied around me. There were so many people at St. John's for the baptism. It was an emotional time for me.

"I received Communion for the first time with the rest of the RCIA program. I'll never forget my first Communion. I don't know what it was about it, but it definitely touched something inside of me."

Swinney continued in the RCIA in the hopes of being confirmed, and that dream came true March 25.

"It was beautiful, absolutely beautiful," he said. "Family and friends came. It was very emotional."

"And one of the biggest changes I've seen in me is that I pray every day. There is great comfort in the power of prayer. My faith has grown to where I believe God is hearing me in my prayer. I repeatedly ask for a miracle."

He paused and added, "I realize there are a lot of people out there who need a miracle."

Swinney is often the one giving doses of faith, hope and inspiration to others. His attitude of focusing on faith and giving up fear has touched and inspired many people, including his pastor.

"In all my years in the church, that was a new one for me -- to give up fear," Nagel said. "I think we should all give up fear."

To produce a good Catholic, raise your child Protestant

Lent is a time to grow in the faith

The Rite of Christian Initiation of Adults works, but only if we change

Is OCIA the only template that one can use to join the Catholic Church?