Father Josh: A married Catholic priest in a celibate world 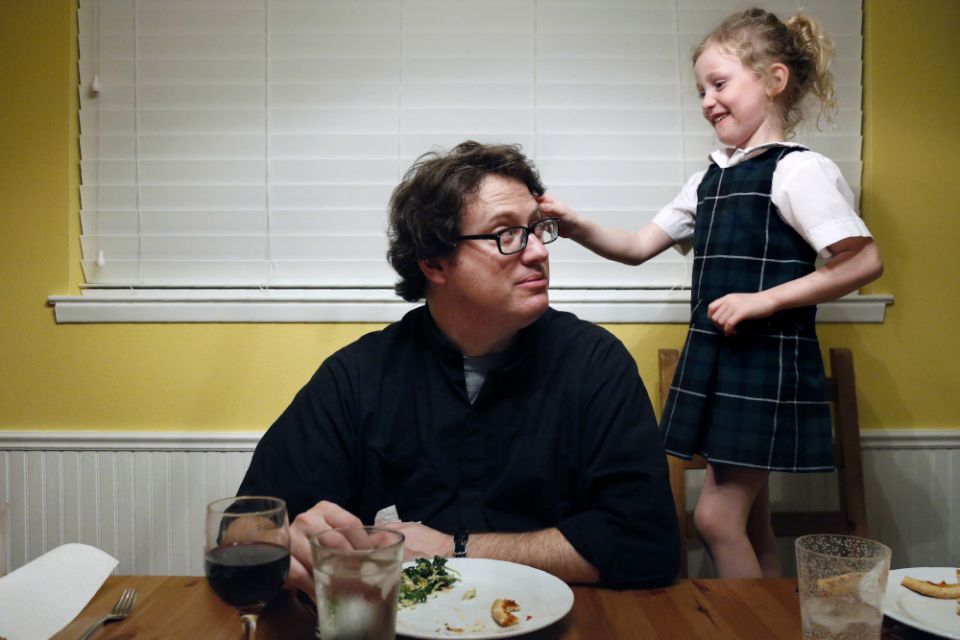 Converted Catholic Fr. Joshua Whitfield, left, looks up at his daughter Zoe-Catherine, 5, who stands on a kitchen chair pressing a pink butterfly clip into his hair during a Feb. 7 dinner in north Dallas. (AP/Jessie Wardarski)

Dallas — The priest wakes up at 4 a.m. on the days he celebrates the early Mass, sipping coffee and enjoying the quiet while his young children sleep in rooms awash in stuffed animals and Sesame Street dolls and pictures of saints. Then he kisses his wife goodbye and drives through the empty suburban streets of north Dallas to the church he oversees.

In a Catholic world where debates over clerical celibacy have flared from Brazil to the Vatican, Joshua Whitfield is that rarest of things: A married Catholic priest.

The Roman Catholic church has demanded celibacy of its priests since the Middle Ages, calling it a "spiritual gift" that enables men to devote themselves fully to the church. But as a shortage of priests becomes a crisis in parts of the world, liberal wings in the church have been arguing that it's time to reassess that stance. On Feb. 12, Pope Francis sidestepped the latest debate on celibacy, releasing an eagerly awaited document that avoided any mention of recommendations by Latin American bishops to consider ordaining married men in the Amazon, where believers can go months without seeing a priest.

Even the most liberal of popes have refused to change the tradition.

It is "the mark of a heroic soul and the imperative call to unique and total love for Christ and His Church," Pope Paul VI wrote in 1967.

Whitfield is a husband, a father of four and a relentlessly good-natured priest beloved by the parishioners at Dallas' St. Rita Catholic Community. His life is spent juggling two worlds. He celebrates Mass, he hears confessions; he drives his son to karate practice, he encourages his oldest daughter's love of baseball. He is, he says, "an ecclesiastical zoo exhibit," one of the tiny community of married priests — men who slipped through a clerical loophole created 40 years ago — that even most Catholics don't know exist.

"It's people like you who are interested in married priests. Here at St. Rita we just get on with it. My job is just to do the tasks the bishop has given me as best I can, and try and make it work," he said in an interview in his book-filled office, where photos of his wife and children vie for space with photos of popes and sketches of his religious heroes.

"It's people like you who are interested in married priests. Here at St. Rita we just get on with it. My job is just to do the tasks the bishop has given me as best I can, and try and make it work."

There are around 125 married Roman Catholic priests like Whitfield, an Episcopal convert, across the U.S., experts say, and perhaps a couple hundred total around the world.

Surveys of Catholics show widespread backing for a married priesthood. A series of reports in recent years by the Pew Research Center showing 62% support among U.S. Catholics, 56% among Brazilians — the world's most populous Catholic nation — and 63% in Central and Eastern Europe.

One reason behind that is a church facing an immense, and growing, shortage of priests. In the U.S., the number of priests has dropped by more than one-third since 1970, falling to less than 37,000 in 2018, even as America's Catholic population has jumped from 54 million to 74 million, according to the Center for Applied Research in the Apostolate. Worldwide, the number of priests has remained fairly stable over the past 50 years — but the Catholic population has doubled to 1.3 billion.

But there's one very small, very notable Catholic constituency that mostly doesn't support opening up the priesthood to married men: married priests themselves.

"So many of the married priests, like myself, hold this sort of strange, almost contradictory position. And I get that it's hard to understand. But that's sort of the irritating beauty of Catholicism. The church persistently thinks theologically, and not sociologically and not politically, at her best," said Whitfield.

The Catholic Church, which includes nearly two dozen rites, allows married priests in its Eastern Rite churches. It also allows in some married priests like Whitfield, a former Episcopal priest who converted to Catholicism with his wife, Alli, in 2009 and was ordained as a Catholic priest three years later.

While married priests were common in Christianity's first centuries, the Latin Rite — the largest of Catholicism's branches, and the dominant rite in the West — has enforced a tradition of a celibate priesthood since the 11th century, in part as a way to keep priests' assets inside the church, instead of being passed to their heirs. It's also in part a way to keep down costs, since maintaining a family is more expensive.

Francis has walked a careful line on celibacy, noting that it is a tradition, not theological dogma, and as a result is open to change. His statements range from the clear-cut — "I don't agree to allow optional celibacy, no" — to the more nuanced, saying married priests might be allowed "when there is a pastoral necessity" in remote areas with dire clerical shortages.

That possibility worries conservatives and thrills liberals, both of whom believe that allowing married priests in such areas as Amazonia or the Pacific Islands could crack open the door to a married clergy.

Whitfield, 41, became a Catholic priest in 2012 through the Pastoral Provision, a set of rules crafted by Pope John Paul II in 1980 that gives married Episcopal priests who have converted to Catholicism the chance to apply for ordination in the Catholic church.

The process, which can take years, includes everything from psychological interviews to exams on Catholic theology and, in the end, a special dispensation from the pope.

The convert priests see themselves as narrow exceptions to centuries of Catholic rules, part of a drive in the Catholic church to reunite with some branches of Anglicanism. They live with special restrictions, including that they cannot become bishops. They also cannot remarry if their wives die, and must spend the rest of their priestly lives as celibates. 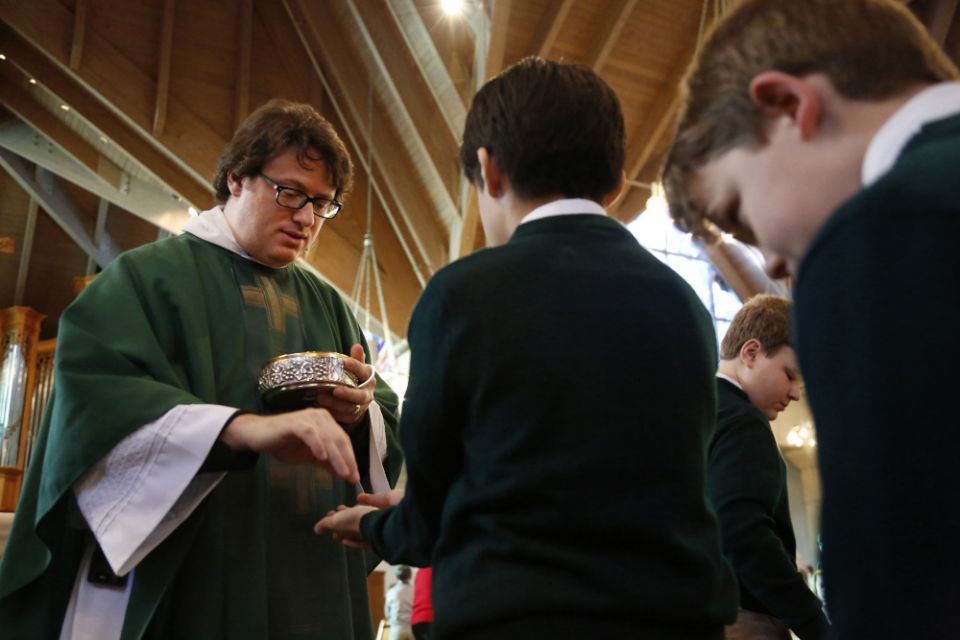 Many of the married converts had become disenchanted with the Episcopal church as they watched it grow increasingly liberal in recent decades, amid bitter battles over such issues as women priests and gay marriage. Ironically, they often find themselves heroes to liberal Catholics, who see them as a modernizing force in the church.

"We are these very conservative men who have left the Episcopal church and now meet all these left-wing Catholics who are celebrating our presence," said Fr. Paul Sullins, a married priest, father of three and longtime professor at Catholic University of America. "It can be uncomfortable at times, but we try to love each other."

Deborah Rose-Milavec, of the Catholic advocacy group FutureChurch, is one of those progressives.

"Whatever their politics on marriage, by the way they live their lives they show it's entirely possible to have a married clergy. They are effective in their ministry. They can say Mass and raise kids. They can administer the sacraments and have a family."

Sullins acknowledges that married priests like himself could eventually lead to others.

Whitfield, who left the Episcopal church in part because he was alienated by the bitterness of its divisions, and felt called to the traditionalism and obedience of Catholicism, avoids debates about celibacy.

"You would think I would have a strong opinion one way or the other," he said. He believes celibacy should be the norm. But if the church decides to allow married priests "then I'd say, 'OK, let's do it, and I can show you how because we've made it work.' "

"Whatever their politics on marriage, by the way they live their lives they show it's entirely possible to have a married clergy."

There's a clear joy in how he and Alli have made it work.

With four children under 10 years old, they live amid the chaos of school and sports and toys and birthday parties. Dinners can be loud, bathtimes can be challenging and scheduling for so many children can be relentlessly complicated. It is, Whitfield says, "a mess of a beautiful family."

"I like to go home and sit down and wrestle with my kids until they upset me and I yell at them," he says.

Whitfield is a gentle-spoken man who beats himself up over his bad Spanish and wonders sometimes if he spends enough time with his children. He's a relentless reader — his shelves hold everything from Jane Austen to Dickens to Ta-Nehisi Coates to treatises on Catholic theology and a biography of St. Benedict.

Theirs is, in many ways, a traditional marriage: he works; she oversees the house and the kids.

Both sometimes find themselves wrestling with the dual pulls of the church and family.

"It would be nice if he would be with us on a Saturday morning," said Alli, because that's when Josh often has Mass and confession and she is juggling soccer games and birthday parties. 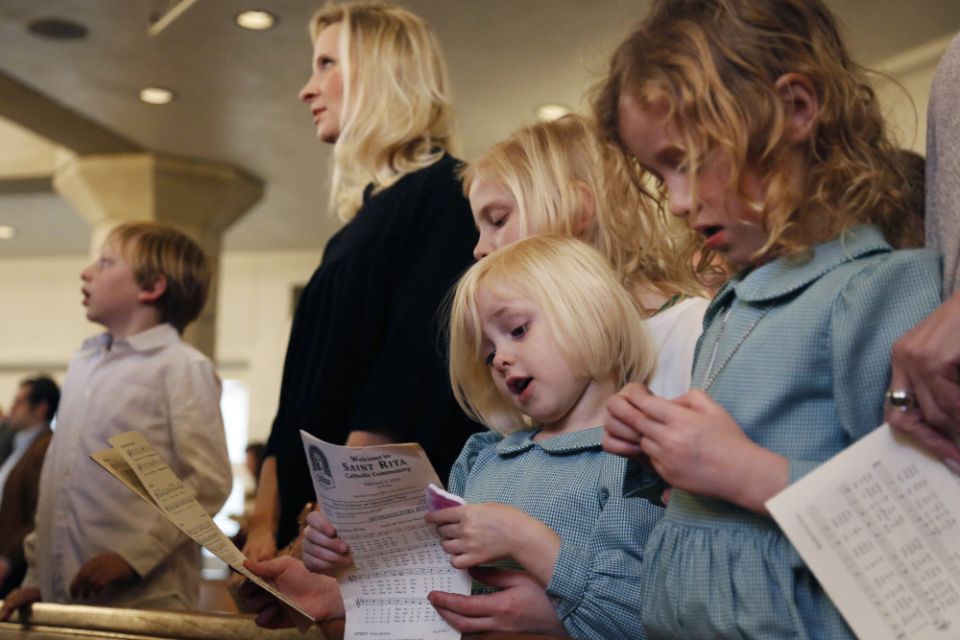 The family of Catholic Fr. Joshua Whitfield, from left, Peter, 8, his wife, Alli, and daughters Maggie, 9, Bernadette, 4, and Zoe-Catherine, 5, stand together in a pew during Feb. 9 Sunday Mass at St. Rita Catholic Community in Dallas. (AP/Jessie Wardarski)

While the parish has warmly welcomed Whitfield and his family, there are occasional complications, from newcomers shocked when Whitfield mentions Alli in a sermon, to a priest's wife — a convert — who isn't quite sure about some Catholic traditions.

"It leads me to stalking moms who grew up Catholic to ask: What did your family do? ... Do you let your kids eat meat on Friday?" she said.

She sees her family as completely normal, albeit more conservative and religious than most. When Whitfield was wrestling with his Episcopalian faith, her concerns were often more prosaic.

"We were at this nice (Episcopal) church and they were supportive of us. We knew where his paychecks were coming from. And if we became Catholic all that would stop. I think that was the big fear for me: Your husband not having a job all of a sudden."

Sometimes, she's still surprised at where she has found herself after meeting Josh in college, when she was just out of her teens.

"I didn't ask for any of this. I was a 20-year-old girl just praying for a man with some faith. But you know, I guess God thought this would be pretty funny."

In Amazon, without a priest, 'there is a hole in the family'