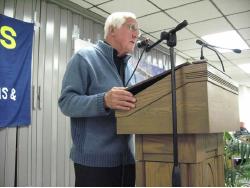 On Dec. 27 when PBS in Detroit airs "Bishop Thomas Gumbleton: A Prophet Among Us?" viewers will be treated to a warm, half hour homage to the former auxiliary bishop of Detroit.

Produced by Tony Gallucci at Metrotelcommunication, Troy, Mich., the film begins with the letter announcing Gumbleton’s seemingly forced departure from his beloved St. Leo’s Parish in Detroit in 2007. It then frames Gumbleton’s life as a civil and ecclesial advocate for victims of sexual abuse, homosexuals and the poor, a non-violent activist, and a serene, pastoral, prayerful follower of Christ. Clergy and religious, members of his family, including his sister, Immaculate Heart of Mary Sr. Irene and brother Dan, who is gay (and that its part of the story), offer insights and some childhood memories.

What is interesting about the film is what it leaves out and therefore it does not quite fit into the documentary category.

For example, canon law requires that bishops and parish priests retire at age 75. When Bishop Gumbleton reached that age, he and his parishoners requested and lobbied to have the bishop remain in the parish in some capacity, but this was denied. Gumbleton intimates during a sermon that he and the parishioners received the same letter announcing his retirement at the same time, thus suggesting that the archbishop of Detroit hadn't shown the bishop the courtesy of contacting him first. Filmmaker Tony Gallucci told me that this is not clear. Archdiocesan spokesman Ned McGrath told Gallucci that an e-mail was sent to the bishop the evening before the announcement. It would seem the bishop (or his assistant) did not check his e-mail.

This information, however, isn't included in the film, and in this, as in other areas the film explores, the broader context is missing. This gives the film a slight, unnecessary edge.

Gumbleton believes that he was not permitted to remain as pastor because he testified before the Ohio state legislature in favor of a bill that would have extended the stature of limitations for victims of childhood sexual abuse for reporting the abuse. Gumbleton testified that as a teenager he had been molested by a priest. The bishops of Ohio were opposed to the bill. Gumbleton’s stance on homosexuality may also have contributed to Detroit's Cardinal Adam Maida not taking him up on his offer to remain active in the parish, according to Gallucci.

Gallucci said the spokesman for the Archdiocese of Detroit declined to be interviewed for the film.

I asked Gallucci about the purpose and intended audience for the film, as well as why the story is told solely from a positive perspective when Bishop Gumbleton is a known controversial figure.

Gallucci replied, “The film started off as an educational project: to tell people in the Detroit area about Bishop Gumbleton and his work. I am from suburban Detroit and I thought [that] he had confirmed me, I was not aware of his ministry until I read an article by journalist Jack Lessenberry, who appears in the film, in 2005 about [Gumbleton's impending] retirement. I took my family and we went to meet him.”

But I was still left wondering about the missing information. The film has a one dimensionality quality that makes it seem as though no one ever questioned the bishop. This leaves unexplored deeper aspects of the bishop’s role in the Catholic peace movement Pax Christi and his ant-war activism, his international influence, and his high profile.

Gallucci told me that his film was an hour long, but that it had to be edited to 25 minutes to meet PBS requirements. He said he found that task so difficult he had to ask a friend to do it for him. The time proves to be too short to tell the whole story.

Gallucci said that there was just so much to tell. In a conversation with Rob Birleson, a senior producer for Michael Moore’s 2007 film "Sicko," Birleson advised him, “No matter how you tell the story, 30 percent of the people will love it, and 30 percent will hate it. Tell the story for the 30 percent who don’t know about Bishop Gumbleton.

Gallucci continued, “The film is dedicated to Bishop Gumbleton's long-time administrative assistant, Sister Rita Olszewski, RSM, who died in March of this year. She kept feeding me stories. For example, when Bishop Tom made a pilgrimage to the Holy Land in 1964 they visited Egypt. He was changed by the plight of the poor there; he had an epiphany -- one of several in his life that led him to non-violent change and to work for justice."

Gallucci added, “I think Bishop Gumbleton’s story might make a better book than a film. Although the film spends a lot of time on his brother Dan’s story, there is so much more to tell.”

Dan Gumbleton left his wife after 15 years of marriage and four children; he has been with his partner for 25 years. In the film, Bishop Gumbleton tells of their mother’s sorrow and worry over Dan’s salvation and how this shaped his pastoral efforts with those who are gay.

So, is Bishop Thomas Gumbleton a prophet? The people in the film say he would never admit it, but they respond with a resounding yes. He remains an active cleric in good standing in the Archdiocese of Detroit.

As a film reviewer I think a more educational approach would have been to produce a documentary that attempted to be objective, even though the attempt to engage Cardinal Maida was not successful. There are people who oppose Bishop Gumbleton’s views. By giving voice to those who question, praise or decry the subject of any documentary film, prophets and posers are revealed and the audience can make up its own mind.

The DVD version from the Web site www.metrotelvc.com/gumbleton/; it comes with two DVDs, the complete film on one and the PBS version with a half-hour of additional material on the other. The cost is $25.00 plus shipping.

Sr. Rose Pacatte, a Daughter of St. Paul, is the director of the Pauline Center for Media Studies, an award-winning writer on film and scripture, and a media literacy education specialist who has served on Catholic and ecumenical juries at the Venice, Berlin and Locarno film festivals.