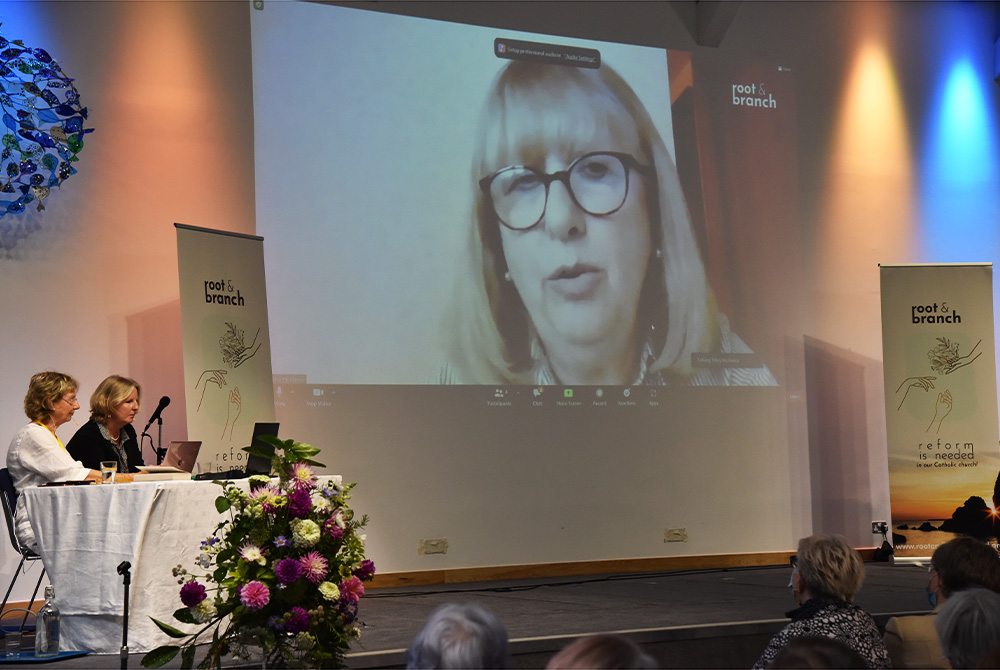 A former president of Ireland has expressed reservations about Pope Francis' leadership of the global Catholic Church, telling a British church reform movement that the pontiff is "a conservative leader" who is blessed with enemies who make him look more liberal than he is.

Mary McAleese, a Catholic who served as the head of the Republic of Ireland from 1997-2011, cited the March document from the Vatican's doctrinal office banning priests from blessing same-sex unions, on the grounds that God "cannot bless sin."

"This was a document that never had to be written, but it was, and he authorized it. That tells me just how ultra conservative he really is," McAleese told participants in the Root and Branch Synod, a lay-run gathering held from Sept. 5-12.

McAleese, who after leaving public office earned a doctorate in canon law from Rome's Pontifical Gregorian University, said she did not see Francis as a great liberal reformer, nor did she see him as courageous.

"The real space that is being opened up is not by Pope Francis, but by the great educated laity now asking questions all these years after Vatican II as to why the promises, the hopes and the expectations of Vatican II have all disappeared into a dead end."
—Mary McAleese, former president of Ireland

She referred to Francis as "a very disorganized pope." But she also told the synod that "in his own chaotic way" the pope had opened up spaces for dialogue and debate.

"The real space that is being opened up is not by Pope Francis, but by the great educated laity now asking questions all these years after Vatican II as to why the promises, the hopes and the expectations of Vatican II have all disappeared into a dead end," said McAleese. "And how did we end up with that clericalized, magisterial episcopacy that betrayed our trust in so many ways? Francis is really just responding to that."

McAleese has criticized Francis a number of times in recent years, especially about the role of women and LGBT people in the global church. In March, the former president told The Irish Times that the pope was a populist and said his "chummy words to the press often quite reasonably raise hopes of church reform which are subsequently almost invariably dashed."

She addressed Root and Branch, gathered in person and online, on the theme, "No Synodality Without Freedom of Speech — Canon law must acknowledge the human rights of Church members." 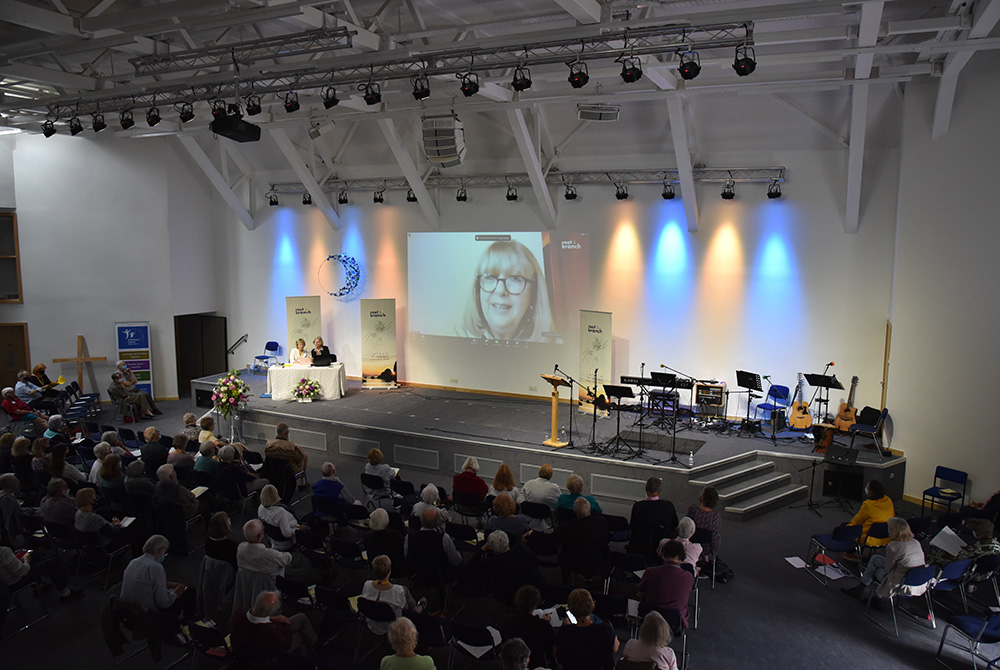 It was one of a series of talks by high-profile Catholic academics and leaders of church reform groups over the weeklong synod.

Catholic synods are usually meetings of bishops, held at the Vatican, where laypersons are invited to attend as experts in non-voting capacities. In January 2020, journalist Joanna Moorhead called in the British Catholic magazine The Tablet for a synod that starts with the participation of laypeople, especially women.

This call brought about the yearlong journey of the Root and Branch event, which was centered in Bristol, England, and heard calls for a radical rethinking of how the church journeys together and the need for reform in the areas of inclusion, diversity, moral theology and governance.

In her address, for which she got a standing ovation, McAleese argued that while there is real value in developing a new culture of synodality in the church, "synodality will only work, in fact the future church will only work, if it is firmly set in a context where there is unequivocal acceptance that church members are entitled within the church and [by] all its laws and processes, including synods, to the inalienable human rights set out in the Universal Declaration of Human Rights of 1948."

Those rights, she highlighted, include the equality of men and women, and their intellectual rights to freedom of expression, speech, thought, opinion, belief, conscience and religion — including the right to change religion.

McAleese said the church's canon law imposes limits and restrictions on all those rights. She said it was clear that in Francis' notion of synodality these issues were not likely to be up for discussion.

"Yet they urgently need to be," said McAleese. "Without a change of course there is little likelihood the forthcoming synod on synodality will deliver a measurable ecclesial thaw." 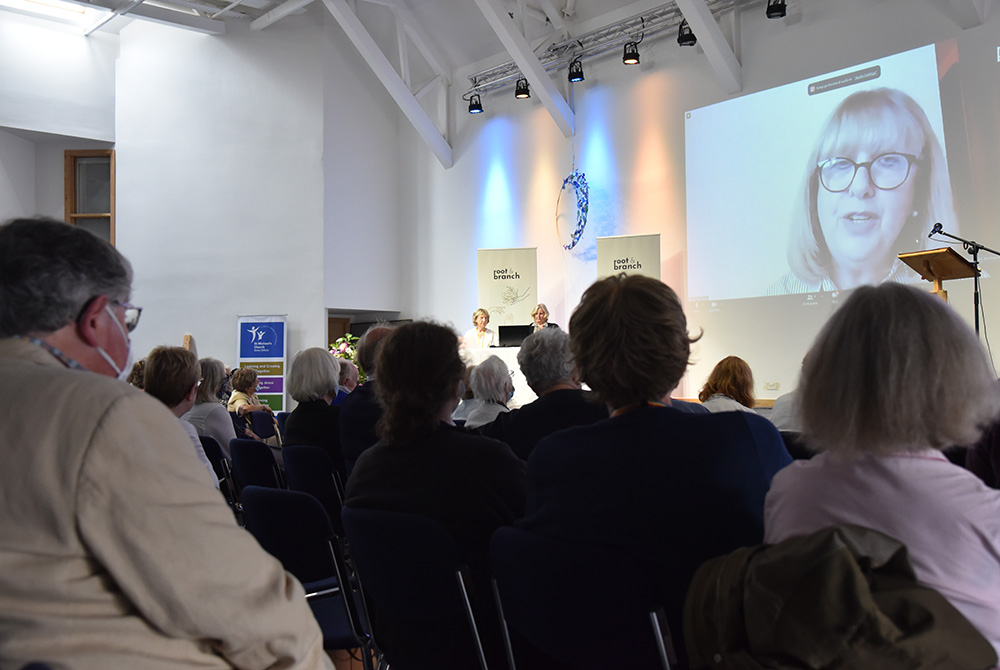 McAleese was referring to the next official synod of the Catholic Church, which is being held in three phases from October 2021-2023. The first phase is to involve local diocesan synods including laypeople, the second wider continental synods, and the third the usual meeting of bishops at the Vatican in October 2023.

McAleese said she sees greater hope in the Root and Branch process and the German synodal way, a countrywide process being undertaken by the German bishops' conference.

"We have to hope and pray that enough faithful in every diocese, including laity, religious, priests and bishops, will find the courage to insist that the recognition in church law of the equality and intellectual freedom of all church members be a priority in the national episcopal reports that will go to Rome for the 2023 synod," said McAleese.

If that happens, said the former Irish president, "it will be the most important reset button the church has ever hit."

But McAleese expressed concern that there would be a "sanitizing of feedback" to the synod office in Rome, and she said the preparatory document, unveiled on Sept. 7, had shown signs that it had been "meticulously designed to forestall feedback from the faithful on contested magisterial teaching, or neglected matters like recognition of the equality and intellectual human rights of church members."

The subsequent preparation phases for the synod will leave complete editorial control to national episcopal conferences, McAleese said. She said she worried that the laity would "disappear from the journey" at the end of the first phase of the three-part synod process and a process of "secret sanitizing" would take over and only the bishops would, in reality, journey together.

"Pope Francis' notion of synodality, which once seemed to have captured the zeitgeist favoring all-inclusive church debating structure, now seems bent on preventing it, and at worst, micromanaging it into irrelevance," she said.

In the question-and-answer session that followed her address, McAleese said that though the process of synodality looked like information going from the bottom all the way up, the likelihood was that by the time it gets to the top, it would be "so filtered and so sanitized and so homogenized that all those lovely, rebellious, dissenting, insightful voices with new ideas will have been long filtered out."

She suggested that as a precaution, to circumvent this filtering out, local synodal groups like Root and Branch — which she termed "fringe synods" — should gather their views, put them into a report and send that directly to the Vatican's synod office.

Another speaker at the synod who called for a thorough revision of canon law was Scottish lawyer Helena Kennedy, a baroness and member of the House of Lords who is one of the U.K.'s most respected lawyers.

Speaking as part of a panel on the theme, "Insisting on Sharing Authority," Kennedy said a radical revision of canon law should be a "key call" from the synod.

Kennedy also suggested that the church should establish a commission to oversee this revision of canon law and that it should include laypeople. The commission should "systematically go through the structures of the canon law and make them appropriate to the 21st century" and it should sit in public as it hears evidence.

Describing herself as "a firm believer in reform,", she said "I really feel that we have to persuade the current leadership [in the church] that they must cede power in order to survive."

This story appears in the Synod on Synodality feature series. View the full series.
A version of this story appeared in the Oct 1-14, 2021 print issue under the headline: Former Irish president criticizes Pope Francis.