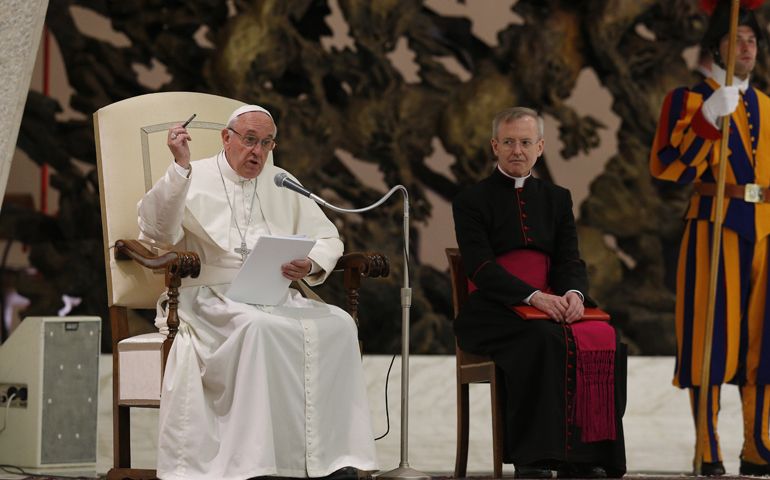 Pope Francis speaks during an audience with the heads of women's religious orders in Paul VI hall at the Vatican May 12. (CNS/Paul Haring)
This article appears in the Women deacons feature series. View the full series.

Pope Francis' announcement Thursday to create a commission to examine the history of female deacons in the Catholic church has left many longtime advocates with a sense of hope, joy and drive moving forward in their efforts to enhance female leadership in the church.

"I am standing on my head, I am happy, I am crying," Deborah Rose-Milavec, executive director of FutureChurch, told NCR in a phone interview Thursday morning. "It is just a historic breakthrough of enormous proportion and the implications are far-reaching, as far as what women will be able to take on in the church."

Rose-Milavec said while the pope is likely to run into opposition from members of the Roman Curia and some theologian and scripture scholars, she does not believe it will deter him. "I don't have any doubts about it. ... No concerns," she said of the opposition. "The UISG spoke very directly about this to him, and I think when he makes a promise to them in that way, it's not going to go away."

Canadian Archbishop Paul-André Durocher, who mentioned the subject during his three-minute intervention at the Synod of Bishops on the family in October, said he was surprised by the news.

"Since the synod members themselves and the pope in his letter didn't refer to the role of women in the church very clearly, I was hoping it was a seed planted in the ground and praying it would bear fruit at one point, but I didn't know if it would," he said.

Durocher said a number of bishops he spoke with at the synod were favorable of studying the idea.

"I'm happy that the pope is seeing it's appropriate to move this way to study this issue more completely," Durocher said. "I certainly believe it needs to be studied in the church and I look forward to seeing how he will set up this commission and how it will be described and who's part of it and the fruit of its work."

Phyllis Zagano, an internationally acclaimed Catholic scholar and lecturer on contemporary spirituality and women's issues in the church, said the movement of the Spirit -- between the Ascension and Pentecost -- is bringing the issue to the surface.

"It's very hopeful," she told NCR. "It displays Francis' openness to scholarship, to history and, most importantly, to the needs of the church."

Kathleen Sprows Cummings, director of the Cushwa Center for the Study of American Catholicism at the University of Notre Dame since 2012, said whether women become deacons is not the most important issue, but rather that the conversation came from a meeting with women.

"The church talks an awful lot about women, but it doesn't talk a lot with women," she said. "They asked a question, and he gave an answer."

This is not the first time the issue has been studied, according to Zagano, who mentioned it was discussed between 1992 and 2002 -- but with no resolution. "The only thing that came about was an inconclusive document that said it's up to the ministry of the church to decide on this matter." The church is finding its way into the 21st century, she added.

History alone will not answer the question of whether the Catholic Church should ordain female deacons, according to historian Gary Macy.

“You have to be very careful when you look at history,” said Macy of the pope’s announcement. “They didn’t do anything in the past the same way as now. It’s just a different setup.”

Macy, professor of theology at Santa Clara University in California, said history proves that there were female deacons -- and in some places in the world -- they were ordained the same way as men.

“Other times [traditions] were different, but not so different that it would make [women] a minor order or anything like that,” he said.

If the church would eventually allow female deacons, said Macy, the vast majority of historical evidence reveals that women should be ordained the same way as men.

Natalie Terry, 27, director of the Ignatian Spiritual Life Center and children's faith formation at St. Agnes Catholic Church in San Francisco, said she has been waiting for the news since she was a teen.

"As someone who's found her call, I wasn't sure there would even be a day the pope would call a commission that would happen in my lifetime," she told NCR in a phone interview.

Terry, who wants to become a deacon, called the announcement an acknowledgement "that women have a vocation." "The fact that the pope and the structural church can acknowledge this is incredibly meaningful, and will mean a dynamic shift will happen in the church now because this commission has been called," she said.

No matter how the details play out, Terry said she believes the commission will create a space for dialogue that includes women.

Connie Walsh, 66, a nurse who felt called to the diaconate in her late 30s, said she was still digesting the news. "I feel like I've just jumped out of my socks," she told NCR.

"I know what it's like to be among women in leadership in the church," she said. "They have worked so long and they are so amazing and so tenacious, who could possibly say no? He [Francis] could have, but he didn't."

Walsh said while she is elated by the news, she is also mindful that big changes take time.

"Will it happen in my lifetime? I don't know that," she said. "I never thought I would get this kind of a phone call, ever in my lifetime."

Others, however, cautioned not to overinterpret the meaning of the announcement.

Cummings, for example, said she was "cautiously" excited by the news. She said the announcement has opened the door for discussion, "maybe a crack."

"Somehow equating this as an announcement that women will be ordained as deacons," is misconstruing the message, she said. "Lots of people have studied this question already. ... People are studying it all the time."

William Ditewig, a deacon of the Washington archdiocese and on the theology faculty at Santa Clara University said the public should keep a balanced perspective on the news.

"Certainly Francis wants to see an increased role for women, but does that involve ordination?"

The International Theological Commission of the Congregation for the Doctrine of the Faith discussed women deacons at a meeting in January 2002. The commission seemed to leave open the question of women deacons, saying that “in light of present historical-theological research,” there is a need for “discernment about what the Lord has established for the church.”

At that time, however, Gerhard Ludwig Müller, who is now a cardinal and prefect of the Congregation for the Doctrine of the Faith, but was then a theologian at Munich University and a member of the commission, dismissed the restoration of women deacons.

“What women accomplish today as professors of religion, professors of theology, pastoral agents, and also in unremunerated activities in the communities goes far beyond what the deaconesses of the early Church did,” Muller told Zenit news agency in 2002.

“The re-establishment of the former ministry of the deaconesses would only be an amusing anachronism,” he said.

In the meantime, women deacon advocates will continue their work within the Catholic church.

FutureChurch will hold a female deacon retreat Sept. 14-16 in Cleveland, Ohio, for "women who are discerning or feel called," said Rose-Milavec. The conference will include sessions on the history of female deacons in the church and a handful of speakers including Zagano.

[Traci Badalucco and Elizabeth A. Elliott are NCR Bertelsen interns.]

Women deacons: What happens next?

A major crack in the ice: studying women deacons