by Peter Feuerherd
People
This article appears in the Francis at Five Years feature series. View the full series. 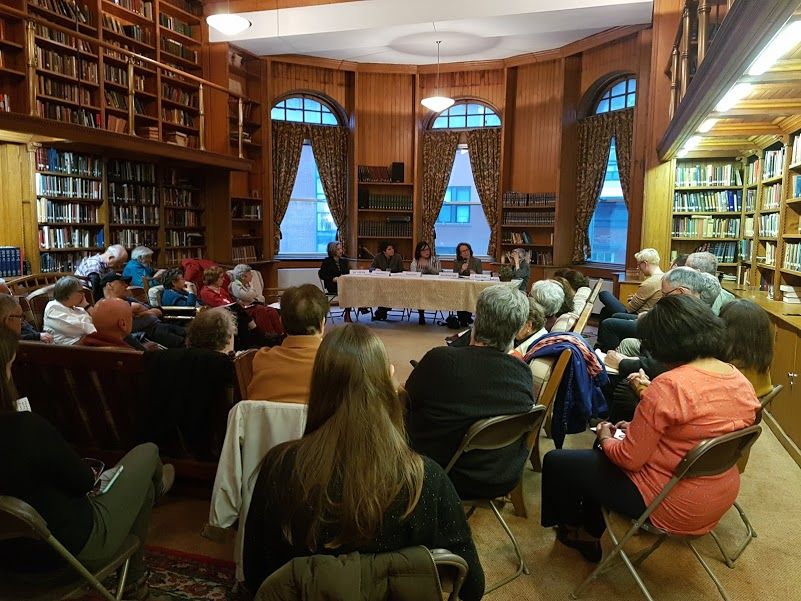 Attendees listen to speakers during Francis After Five: A Feminist Review, April 16 at the Arrupe Library of Xavier High School in Manhattan. (Provided photo)

New York — In five years, Pope Francis has led a call to save humanity from climate change, propelled a renewed vision on social justice and offered a clear welcome to estranged Catholics.

But he still has issues with women which dampen that positive impact, a consensus emerged from feminist scholars and others at an April 16 panel discussion at Xavier High School here.

"Pope Francis falls short of the whole church," said Kate McElwee, executive director of the Women's Ordination Conference, a co-sponsor of the "Francis After Five: A Feminist Review" event with Dignity New York, a group which promotes LGBT rights for Catholics.

Some of the early optimism of the papacy has eroded, said one panelist.

"At what point does our hope for him become denial?" asked Jamie Manson, NCR columnist and books editor, who said that Francis is circumscribed on women's issues by "the church's teaching that biology is destiny." In papal statements, women are ascribed nurturing roles, while men are still viewed in the context of asserting leadership. The pope believes, said Manson, that as women, "Our first and most essential vocation is motherhood and raising a family." 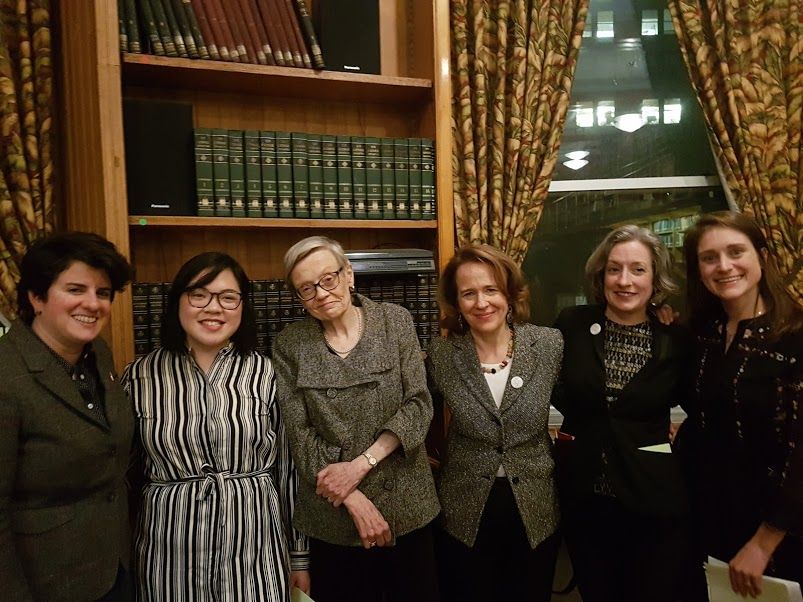 While Francis has offered positive statements about women, they are still in the context of patriarchy, said Manson. "Putting someone on a pedestal does not make them equal," said Manson, who described herself as a "queer woman who has felt called to the priesthood since the age of 12."

The church's view that complementarity of gender is the basis for marriage dismisses those who believe in the rights of LGBT people to marry. Francis declines to change church teaching on LGBT rights and on contraception, issues that continue to have an impact both on LGBT people and women throughout the world, said Manson.

Denying LGBT Catholics the right to marry in the church, said Manson, "creates shame. You are saying this love is not worthy."

Teresa Cariño, pastoral associate for youth and young adult ministry at St. Ignatius Church in Manhattan, said she watched the papal election five years ago with hope and anticipation while still a college student. Describing herself as a product of the San Francisco Bay area liberal Catholic cocoon, at the time she felt "This was our moment," with the election of the Latino pope.

She has experienced disappointment with his leadership.

"We are left with what's next. He hasn't done as much as he could to follow through on what he is saying."
—Teresa Cariño

"Catholic youth are leaving the church," she said as they have grown disillusioned with the pace of change. "Why stay when there are so many reasons to leave?" is what she hears from her contemporaries. Still, as a woman and a Filipina, she said she was cheered by Francis' encyclical, "Laudato Si', On Care for Our Common Home," which called for a worldwide movement to deal with climate change.

But, she said, "We are left with what's next. He hasn't done as much as he could to follow through on what he is saying."

As a parish worker, Cariño finds that using her last name can carry some weight. But when her gender is identified, her influence is often dismissed, even in routine matters such as administering sacramental documents. As a woman and a church worker, her opportunities for advancement remain limited, she said.

While Francis has not budged on church teaching, such as offering ordination solely to men, panelists have seen positive developments with this papacy.

Marian Ronan, professor of Catholic studies at New York Theological Seminary, said that Laudato Si' was a game changer, inspiring the world to take a harder look at the impact of the calamity of climate change.

"The environmental catastrophe is one of the two greatest threats facing humanity in our time," said Ronan, citing the threat of nuclear war as the other great challenge. Within decades, she said, "We face biological annihilation."

Francis has focused on the environment and placed Catholic social justice teaching as a top priority, on the same level that previous popes had placed issues of sexual morality. That, said Ronan, is a needed challenge to the world, particularly in Francis' challenge to those in prosperous countries who produce many times the pollutants than those in poorer countries.

Francis, she said, has provided "a global moral compass more powerful than the Paris accords" on global climate change. 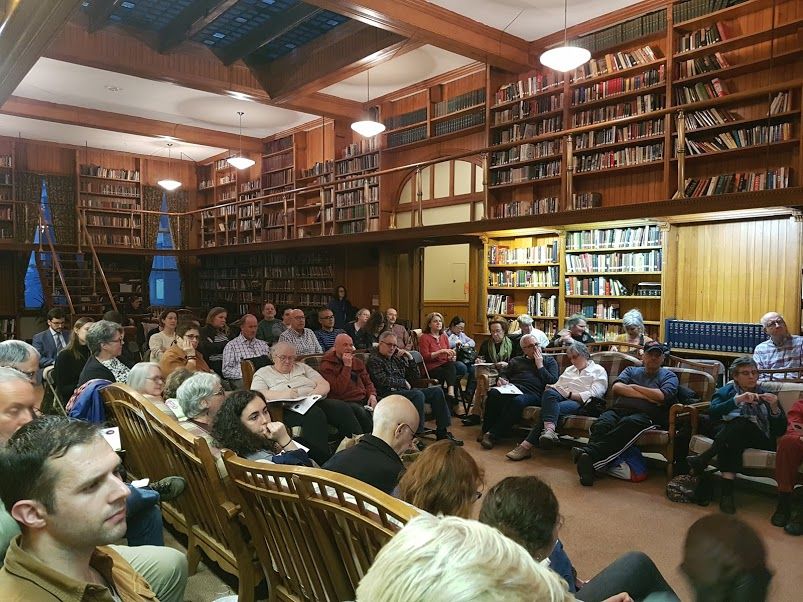 Attendees listen to speakers during Francis After Five: A Feminist Review, April 16 at the Arrupe Library of Xavier High School in Manhattan. (Provided photo)

Anne Barrett Doyle, co-director of bishopaccountablity.org, an independent agency which tracks the record of the church on sex abuse, said that Francis has a mixed record on that issue. His rhetoric has been strong, being the first pope to describe the church's response to the sex abuse crisis as a cover-up that needs to be corrected.

Francis has also clearly, in his public statements, called bishops to accountability for the crisis. Yet his major reforms in that area — a pontifical commission and a tribunal for complicit bishops — have fizzled amidst curial opposition and foot dragging.

Sometimes Francis' rhetoric has not been helpful, said Doyle, as in his focus on condemning "calumny," which is sometimes used to hush the voices of sex abuse victims.

Yet Francis' penchant to admit mistakes offers hope, said Doyle. He has turned around his view on a Chilean bishop accused of being an accomplice in clerical sex abuse and has summoned the bishops of that country to the Vatican to address the crisis there. "Heads are going to roll," she said is the consensus of church watchers about the situation of the church in Chile.

Doyle said her hope on sex abuse issues comes largely from outside the church, through the actions of civil authorities in Chile, Australia and some U.S. states who are unwilling to overlook clerics complicit in abuse. The unprecedented search of the offices of the Saginaw, Michigan, diocese by authorities concerned about alleged sex abuse cover-ups offers an example for church officials in other dioceses to be more transparent.

Other positive developments cited by the panel included Francis' selection of bishops considered more progressive; the recent synod of youth conference at the Vatican which addressed concerns about women's roles in the church, and the pope's outreach to divorced and remarried Catholics.

Change is happening, said Ronan, even if it is not formally acknowledged in doctrinal changes desired by the group. One example, she noted: the investigation into religious sisters in the United States, begun by Pope Benedict XVI, has been allowed to wither away. Catholic women, she said, need to agitate for change, and are finding a more sympathetic audience inside church structures than they did prior to the Francis era.

And Manson noted another significant change that would never have happened without this papacy. The panel discussion itself, which attracted about 70 people, held in the library of a Jesuit high school. Such an event, she said, would never have been allowed to take place in a Catholic venue before Francis provided an opening to a more freewheeling discussion within the church. Panelists agreed that Catholic women promoting change in the church need to use that opportunity to make their voices heard.

Why wasn’t a woman invited to preside at a papal prayer service?

After a thrilling week: A ‘downer’